With Our Thoughts, We Make the World 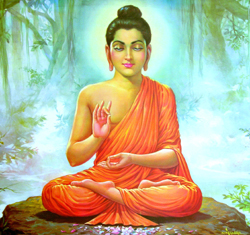 What we are today comes from our thoughts of yesterday, and our present thoughts build our life of tomorrow: Our life is the creation of our mind.
– Buddha

Those of us who grew up in the 1980s were, quite unknowingly, absorbing a healthy dose of Eastern mysticism when we watched the wonderful Japanese television series “Monkey” every weekday evening at 6.30pm. For all of the colour and movement and occasionally risqué language that appealed to my childish mind, I was also, perhaps, taking to heart the wonderful précis of Buddhist philosophy that made up the introduction to each episode: “With our thoughts, we make the world.”

This is a quote from “The Dhammapada,” that exquisitely brief text that provides the reader with all of the main ideas to be found across all of the schools of Buddhism. In fact, it is the very first verse of that most fundamental book. It is the construct that informs the Buddhist world-view – all of this, that we so keenly call “reality,” is a product of thought, and so it can be influenced by the shape of our thoughts, and we can begin to craft a new reality through disciplining our process of thought and directing it towards wiser outcomes.

Volition and free-will were the points of divergence between Buddhism and the other religious systems of the ancient world, which tended to favour notions of fate and pre-destination. The Buddha taught that karma provided us with conditions only. In every single moment we are free to choose a wise thought and do a wise action. Buddhism is brutal in its advocacy of personal responsibility. Such a point of view seems strikingly modern and rational, though perhaps slightly politically incorrect in this more feeling age.

It is the rigorous control of thought, its careful disciplining, that grew to become the central practice of Buddhist practitioners. Samantabhadra, the Universal Worthy Bodhisattva, is the patron saint of meticulous religious training in the world of Mahayana Buddhism. He imposed upon himself the almost-impossible task of honouring the Buddha in each and every thought. If his thoughts were filled with the Buddha, so must his actions and words be inhabited by the goodness of the Awakened One. Look after the thoughts, and the actions will take care of themselves.

In the Western tradition there emerged, as well, the notion that one’s actions reflected one’s spiritual wellbeing. The way a person looked and spoke was seen by Emanuel Swedenborg as evidence of habitual reflection: either on the beauties of heaven or the torments of the natural world. Much later, the great teachers of New Thought in the twentieth century saw the spiritual importance of thought control, teaching that the thoughts were our channels to God, and so should be as perfect, loving and happy as possible.

We perhaps fool ourselves that our thoughts can be allowed to stray and our lives will not be affected. Gossip, habitual negativity, judgement and constant criticism can seem fun when we are engaged in them. We can justify them, or elevate them, priding ourselves on our cynicism and critical capacities. But the Buddha was aware that all that we thought was, in fact, the sum total of our life’s experience – we cannot know goodness and happiness if we do not allow our thoughts to cultivate those qualities. He recognised that it requires discipline and the conscious application of energy to direct our minds into positive directions. Without such care we can slide into destructive patterns. To watch over the mind, he said, is conducive to happiness.

WALTER MASON is an academic and writer with a long-standing interest in meditation, prayer and other contemplative practices. His first book Destination Saigon was named one of the ten best travel books of 2010 by the Sydney Morning Herald. His website is www.waltermason.com.

Read this article and much more by downloading
your copy of New Dawn 131 (PDF version) for only US$5.95