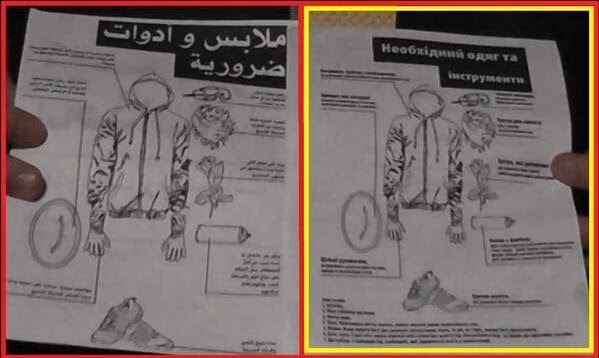 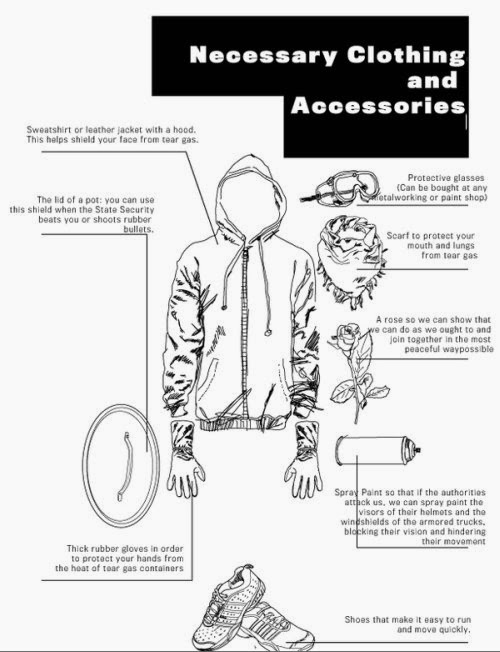 OPTOR instructions for gear from Kiev and Tahrir Square.
.
In Ukraine, US-backed rebels seize weapons from a military depot and begin firing on police ~ killing at least ten. The rebel groups occupy and torch government buildings, trade union headquarters, the central post office, and political party headquarters. They occupy local government facilities in other cities and physically attack local authorities. Their goal is to overthrow the elected government.
.
Reports of rebel reinforcements arriving, with “bulky backpacks near the scene of the latest protests,” are suspiciously reminiscent of the “Internet in a Suitcase” project funded by the US government to provide tools for “activists” in regime-change candidate countries. The US has similarly trained and equipped the Syrian rebels.
.
US-backed rebels are photographed all over Ukraine with weapons, sometimes photographed shooting at police. In Syria, the US covertly provided the weapons and approved Saudi Arabia, Qatar, and other “friends of Syria” to provide even more. A Russian official has accused the US of arming the Ukrainian opposition.
.
As in Syria, where US Ambassador Robert Ford adopted the rebels from the beginning of the insurrection, US officials have beat a steady path to the Ukrainian rebels to offer their support and assistance. Senator John McCain has even dined with Svoboda Party president Oleh Tyahnybok, shown here in a rather different pose. US Assistant Secretary of State Victoria Nuland was recorded plotting the overthrow and replacement of the Ukrainian government with the US Ambassador to Ukraine, Geoffrey Pyatt.
.
Pyatt, a man surely devoid of any sense of self-reflection, boldly proclaimed that his recorded plotting to overthrow of the Ukrainian government was merely “helping to build bridges between the government and the opposition.” Of course in a strict sense that is true: he is actively engaged in building a bridge to government power for the Ukrainian opposition.
.
The Syrian rebels are presented as a moderate group of would-be democrats seeking political reform; Ukrainian rebels are presented as a bunch of pro-Western, pro-EU “peaceful demonstrators.” In both cases the real power on the streets has been radical extremists with whom US officials have had considerable contact.
.
In Syria, President Assad responded early on to the unrest with offers of compromise, including agreeing to hold a constitutional referendum which put an end to generations of one-party rule.
.
In Ukraine, President Yanukovich granted amnesty to violent protesters, rescinded legislation seen as inhibiting protest, fired his government at the request of the opposition and even offered to name opposition leaders to a new interim government.

Obama warned the Ukraine government to make sure the “Ukrainian military does not step in to resolve issues that could be resolved by civilians.” The US military was called in to quell a far less significant protest in Seattle over the World Trade Organization meeting there in 1999.
.
The US Capitol area has been on “lockdown” innumerable times over such “threats” as a mentally disturbed woman driving erratically ~ who was unarmed and shot dead by police.
.
One need not side with either opposing group in Ukraine to point out the choking hypocrisy of the US position.
.
But what is truly remarkable are the many similarities between what has been happening in Syria and what is now happening in Ukraine. It almost seems as if the same hand with the same playbook is plotting both regime change operations.
Bookmark the permalink.