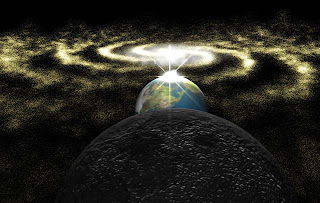 As we move closer to the 21st of December 2012, there are many interesting views coming from people from all over the world. So many ancient traditions recognize this time as a time of purification and renewal. When the old ways of self destruction undergo some sort of a metamorphosis bringing forth true wisdom and a new way of life.

After having heard many folks share their views on 2012 such as Patricia Cori, Dolores Cannon, Princess Nakamaru, Carl Calleman, Bashar, Drunvalo Melchizedek, Sheldon Nidle and the Mayan Elders, one can say there is something big expected to happen on Earth in the very near future and hopefully we can all understand this transformation and make the best we possibly can of the opportunities that lie ahead of us.

We’ve so far heard of the 3 days and 3 nights of complete darkness … and splitting of the Earth into 2, one which would be the 5D Earth, instant transformation of everything in a flash and some who say it would be a non event, however the process of transformation would go on further and real change would manifest a few years from now, perhaps around 2016/2017.

In the following video, Ac Tah of the Mayan people, gave a talk in Santa Monica last month. In this video he speaks about what is happening around December 21st 2012 and it’s significance to the world.

How this change will really manifest in our reality is something we have to understand at a deep intrinsic level of our own being. How we see ourselves and the world plays a key role in creating paradigms for societies to live within … This is the time to awaken to the possibility of a great shift in human consciousness and each one of us plays our part to manifest this change. What is expected to transpire on December 21st 2012 is not some grand event to wait for but a process unfolding right now … we must stay heart centered and tune in this energy surging towards our solar system from the center of the milky way … In lak’ech ala k’in …