WE WANT WAR, AND WE WANT IT NOW 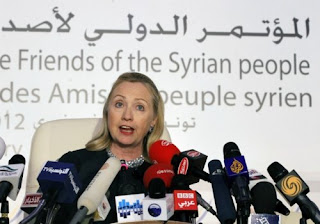 With friends like this…..
ByPepe Escobar
Asia Times
April06, 2012
It was deep into thenight, somewhere over Siberia, in a Moscow to Beijing flight (BRIC to BRIC?) whenthe thought, like a lightning bolt, began to take hold.

What the hell is wrong with those Arabs?

Maybe it was the narcotic effect of that perennially dreadful Terminal F atSheremetyevo airport ~ straight out of a Brejnev gulag. Maybe it was the anticipationof finding more about the Russia-China joint naval exercise scheduled for lateApril.

Or it was simply another case of “you can take the boy out of the MiddleEast, but you can’t take the Middle East out of the boy”.

WITH FRIENDS LIKE THESE ~
It all had to do withthat Friends of Syria (fools for war?) meeting in Istanbul. Picture SaudiForeign Minister Saud al-Faisal ~ who seems to have a knack for sending USSecretary of State Hillary Clinton into rapture ~ feverishly arguing that the Houseof Saud, those paragons of democracy, had “a duty” to weaponize theSyrian “revolutionary” opposition.

And picture al-Faisal ordering an immediate ceasefire by the Bashar al-Assadgovernment, guilty ~ according to the House of Saud ~ not only of cruelrepression but crimes against humanity.

No; this was not a Monty Python sketch.

To make sure he was milking the right cow, al-Faisal also said that the GulfCounter-revolution Club (GCC), also known as Gulf Cooperation Council, wantedto get further into bed with the United States. Translation, if any was needed;the US-GCC tag team, as expressed by the weaponization of the Syrian”rebels”, is meant to body slam Iran.

Forboth the House of Saud and Qatar (the other GCCs are just extras), what’s goin’on in Syria is not about Syria; it’s always been about Iran.

Thisespecially applies to the Saudi pledge to flood the global oil market with aspare oil production capacity that any self-respecting oil analyst knows theydon’t have ~ or rather wouldn’t use; after all, the House of Saud badly needshigh oil prices to bribe its restive eastern province population into not eventhinking about that Arab Spring nonsense.

Clinton got the pledge from the House of Saud in person, before landing inIstanbul. Washington’s return gift was of the Pentagon kind; the GCC soon willbe protected from “evil” Iran by a US-supplied missile shield. Thatimplies that an attack on Iran may have been discarded for 2012 ~ but it’scertainly “on the table” for 2013.

ED: Raise your hands if youthink Obama is going to run for the presidency on, among many other unpleasantthings, an Iran confrontation basis to placate his Zionist owners.

Asian nations ~ especially BRICS members China and India ~ will keep buying oilfrom Iran; the problem is what the European poodles will do. Other realproblems are that the Kurds in northern Iraq are taking their oil off themarket until Baghdad pays them the share they had agreed upon. And then thereare Syria’s 400,000 barrels a day, which have been dwindling over the past fewmonths.

Still, the Saudis will keep playing the make-believe oil scenario as a gift toWashington ~ as the US pressures compliant European Union poodle economies andextremely wary Asians they have no reason to keep buying Iranian oil.

But then into this mess in Istanbul Iraqi Prime Minister Nuri al-Maliki ~ whosepower is a direct consequence of Washington’s invasion and destruction of Iraq ~steps in with quite a bang.

Here it is, in his own words:

“Wereject any arming [of Syrian rebels] and the process to overthrow the [Assad]regime, because this will leave a greater crisis in the region … The stanceof these two states [Qatar and Saudi Arabia] is very strange … They arecalling for sending arms instead of working on putting out the fire, and theywill hear our voice, that we are against arming and against foreigninterference … We are against the interference of some countries in Syria’sinternal affairs, and those countries that are interfering in Syria’s internalaffairs will interfere in the internal affairs of any country … It has beenone year and the regime did not fall, and it will not fall, and why should itfall?”

Maliki knows very well that the ongoing and already escalatingweaponizing of Sunni Syrians ~ many of the Salafi and jihadi kind ~ willinevitably spill over into Iraq itself, and threaten his Shi’ite-majoritygovernment. And that, irrespective of the fact that his administration supportsthe close Iran-Syria relationship.

Maliki, by the way, was back in power in the autumn of 2010 because Tehrandeftly intervened to make sure the Sadrists would support him. To add toMaliki’s anger, Qatar is refusing to extradite Iraqi Vice President Tareqal-Hashemi, accused of masterminding a pro-Sunni coup d’etat in Baghdad.

HOW GREEN WAS MY JIHAD VALLEY
So Washington is now merrily embarking in a remix of the 1980s Afghan jihad -which, as every grain of sand from the Hindu Kush to Mesopotamia knows, led tothat ghostly entity, al-Qaeda, and the subsequent, transformer “war onterror”.

The House of Saud and Qatar have institutionalized that motley crew known asthe Free Syrian Army as a mercenary outfit; they are now on their payroll, tothe tune of $100 million (and counting).

Isn’t it great to be a revolutionary with an assured paycheck?

Not missing a beat, Washington has set up its own fund as well, for”humanitarian” assistance to Syria and “non-lethal” aid tothe “rebels”; “non-lethal” as in ultra battle-readysatellite communications equipment, plus night-vision goggles.
Clinton’s silky spin was that the equipment would allow the”rebels” to “evade” attacks by the Syrian government. Nomention that now they have access to actionable US intelligence via a swarm ofdrones deployed all over Syria.

Maliki can clearly see the writing on the (Sunni) wall. The House of Saudinvaded Shi’ite-majority Bahrain to protect the extremely unpopular Sunnial-Khalifa dynasty in power ~ their “cousins”.

Maliki knows that a post-Assad Syria would mean MuslimBrotherhood Sunnis in power ~ sprinkled with Salafi-jihadis. In his worstnightmare, Maliki sees this possible dystopian future as an al-Qaeda in Iraqremix on steroids.

So this is what the Istanbul-based “Friends of Syria” bash turnedinto; a shameless legitimizing ~ by Arabs allied with the US ~ of civil war inyet another Arab country. The victims will be average Syrians caught in thecrossfire.

There will be no ceasefire.
The Assad government accepted the plan.
The weaponized “rebels” rejected it.
Imagine the Syrian government beginning the “pullback ofmilitary concentrations” while swarms of weaponized “rebels” andassorted mercenaries (from Libya, Lebanon and Iraq) keep deploying theirtorture tactics and launching a barrage of improvised explosive devices.

I landed in Beijing eager to learn more about the upcoming joint Russia-Chinanaval exercise in the Yellow Sea, but instead I was stuck with a HenryKissinger op-ed in the Washington Post.

The Arab Spring is widely presented as a regional, youth-ledrevolution on behalf of liberal democratic principles. Yet Libya is not ruledby such forces; it hardly continues as a state. Neither is Egypt, whoseelectoral majority (possibly permanent) is overwhelmingly Islamist. Nor dodemocrats seem to predominate in the Syrian opposition.

The Arab League consensus on Syria is not shaped by countries previouslydistinguished by the practice or advocacy of democracy. Rather, it largelyreflects the millennium-old conflict between Shi’ite and Sunni and an attemptto reclaim Sunni dominance from a Shi’ite minority. It is also precisely why somany minority groups, such as Druzes, Kurds and Christians, are uneasy aboutregime change in Syria.

Well,China scholar Dr K at least got this one right (and in total agreement withMaliki, no less).
Afull-fledged mercenary army paid for by autocrat Arabs to overthrow an Arabgovernment is pure and simple regime change ~ US rhetoric about”democracy” and “freedom” notwithstanding.
It’sall about classic, imperial divide and rule, profiting from pitting Sunnisagainst Shi’ites.

And then my divine roasted duck revealed to me that realpolitik stalwart Dr Kis not getting much traction in Washington these days.

Pepe Escobar is the author ofGlobalistan: How the Globalized World is Dissolving intoLiquid War (Nimble Books, 2007) and Red Zone Blues: a snapshot of Baghdad during the surge. Hismost recent book, just out, is Obama does Globalistan(Nimble Books, 2009).

He may be reached at