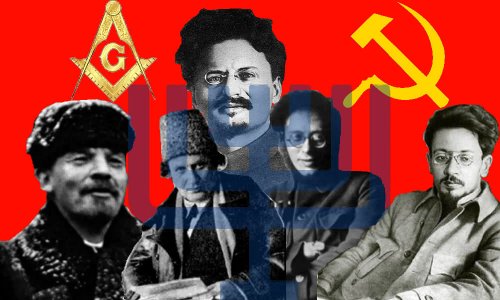 USSR: Illuminati Experiment Was “Social Catastrophe”
by Henry Makow Ph.D.
May 20, 2009
From HenryMakow Website
As we edge toward world government, it pays to recall the Illuminati’s last great social experiment, Soviet Communism, which Jüri Lina describes as a “social catastrophe.”In his book, “Under the Sign of the Scorpion” (2002), the Estonian writer says about 150 million people died as a result of the Bolshevik Revolution, subsidized by the Illuminati (Masonic Jewish) banking cartel.

The West pretended to oppose the Bolsheviks but in fact defended them and betrayed the White Russians who were our allies in WWI. The Bolsheviks would have lost except for Western intervention. (322)An additional 60 million people were murdered under Chinese Communism. These Satanic regimes “gripped the… people by the hair of their heads” (Winston Churchill) and brutally destroyed two advanced civilizations. The Illuminati central bankers still run the world.

If “Past is Preface,” are we being set up for similar brutal treatment?
Is this the reason why the truth about these “revolutions” is suppressed?

Why we are being dumbed, degraded and trivialized?INSIDE STORY

Juri Lina claims that the USSR was ruled by Jewish gangsters. Soviet “anti-Semitism” was the spin they put on their gang wars. Marxist ideology was a smokescreen. Josef Stalin was a Jew who spoke Yiddish and married Jewish women. He was diagnosed as a “paranoid hysteric” by a doctor he murdered for revealing this.
ED: Interesting to note that Dr. Moshe Yatom, a prominent Israeli psychiatrist “committed suicide” after dealing with Bibi Netanyahu and coming to similarly unflattering conclusions. ”This guy would say Gandhi invented brass knuckles.”

He had an inferiority complex due to being only five foot one inch tall and employed a stand-in for public appearances. He murdered his second wife in 1932 when she accused him of genocide. Like Lenin, another Jew (who died of syphilis) Stalin was also bisexual. (pp. 284-286). These are the freaks the Illuminati bankers put in power.Stalin was under the influence of another Jew, Lazar Kaganovich (and married his sister.) Kaganowich played on Stalin’s paranoia to murder over 20 million Communist party leaders, functionaries, and army officers, especially those aware of his nefarious deeds. Stalin and Kaganovich were after their rivals’ gold.

During the Great Terror of 1934-38, NKVD Officers began wearing a new symbol on their sleeves, a sword and serpent.

“This symbolized the struggle of the cabbalistic Jews against their enemies,” Lina writes. “There is no devil according to the Talmud. Satan and God are united in Yahweh.”

At the peak of Stalin and Kaganovich’s terror in 1937-38, executions reached 40,000 a month.
Alexander Solzhenitsyn estimated a million executed and another two million died in death camps.
Literaturnaya Rossiya estimated total deaths due to murder, induced starvation and maltreatment at 147 million, five million a year for the period 1918-1938.

Lina points out that many killed were women and children who were classed as “enemies of the people.” After all “they cost money” i.e. were “useless eaters” in Communist eyes.

Huge mass graves surround the major cities of the USSR. One containing 100,000 bodies was found in Kuropaty, six miles from Minsk. Every night from 1937 to June 1941, the NKVD lined people up at the grave side, gagged and blind-folded. To save bullets, the executioners tried to kill two people with one shot. (303)At the peak of the terror, the NKVD began gassing people to death in lorries. The West considered all this to be normal.

Bernard Shaw said nations had the right to eliminate undesirables.

The US ambassador to Moscow, Joseph Davies, a Freemason, was especially enthusiastic about the show trials. (304)

The USSR lost an additional 35-45 million people during the Second World War.

The historian Nikolai Tolstoi claims that half of these were actually killed by the Bolsheviks and blamed on the Nazis.

During campaigns against counter revolutionaries in 1949-1952 another five million people were murdered. (307)Apart from the Holomodor (1932-32) which killed 15 million Ukrainians, there was another (lesser known) organized famine in the Ukraine in 1946-1947 to put down political resistance. This killed two million. Another million Russians were killed or irradiated in 1954 when the Communists tested an atomic weapon on their own people. (318)

SATANIC GENOCIDE SPONSORED BY THE WEST

The Bolshevik Revolution was totally organized and financed by Illuminati bankers (Schiff, Rockefeller, Warburg etc.) and the German government, which they controlled. (206)Anthony Sutton found that 95% per cent of Soviet technology came from the US or their allies. He said the Communists couldn’t have lasted “one day” without Western aid. While pretending to be engaged in a “Cold War,” the West actually provided billions in direct military and economic aid to the Soviets. How else could they create and have a war? (322)

A quarter million tractors were needed for the “collectivization” of the Kulak farmers land. With financing from Kuhn Loeb, 80 US companies participated in building three huge tractor factories. These were also used for building tanks.

Under the Rapallo Treaty signed in April 1922, German consortiums built numerous airplane, locomotive and munitions factories throughout the USSR. Krupp built tanks and submarines in Leningrad and Rostov. German troops rehearsed Blitzkreig tactics on Russian soil. Clearly the Illuminati elite sponsor both sides of every conflict. Without this industrial activity and economic aid, the USSR would have quickly failed.

The West’s Illuminati politicians and financiers didn’t lose any sleep over the executions or the 15 million sent to the Gulag. (343). Their newspapers suppressed this information.

They are as guilty as the NKVD executioners, and it was all done on our dime.

“The Western financial elite wanted to use market economy capitalism as an anvil and Communism as a hammer to rule the world and entirely subdue it,” Lina writes.

Eventually the cost of maintaining the USSR became too heavy, and the new Russia was born, under the Freemasons Yeltzin and Putin.
The same gang of Satanists and mass murderers continue to rule our planet.
Our politicians are their conscious or unconscious agents. This doesn’t bode well for the New World Order.

A thin patina of law and civilized tradition separate us from the barbarism and chaos experienced in Russia.We live in a fool’s paradise.

The price of not bringing these monsters to justice for crimes like 9-11 is that they continue to inflict their madness on the human race.