US Private Military Contractors in Ukraine? 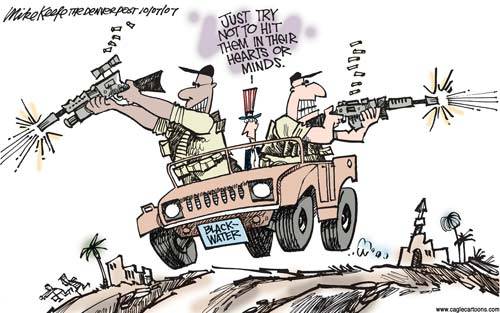 He called it a “shadowy mercenary company (employing) some of the most feared professional killers in the world accustomed to operating without worry of legal consequences (and) largely off the congressional radar.”

It has “remarkable power and protection (within) the US war apparatus.” It’s well funded. It operates extrajudicially.

It’s unaccountable. It’s licensed to kill, terrorize, destroy and destabilize. It takes full advantage wherever its forces are deployed.

Neo-Nazi putschists were installed. They have no legitimacy whatever. So-called May 25 elections are scheduled. They’ll be sham ones when held.

The battle for Ukraine’s soul continues. Expect hard times to get much harder. More on this below.

Most Crimeans reject Kiev putschists. They do so for good reason. On March 16, they’ll choose their future. Popular sentiment suggests they’ll join Russia.

“The transition from one jurisdiction to the other is a complicated process, but I think in the case of a favorable outcome of the referendum, the Crimeans will be able to feel as citizens of another country within a month.”

Over 2.2 million ballots will be printed. About 1,250 voting stations will be ready. Russians comprise about 60% of Crimea’s population, Ukrainians around 25% and Tatars 12%.

Its residents will vote in the March 16 referendum. They’ll decide if they want to become part of Russia.

“We will hold one referendum with the rest of Crimea,” he said. Constitutional changes will be made separately, he added.

Two referendum questions will be asked:

(1) “Do you support reunification of Sevastopol with Russia as its constituent member?”

(2) “Do you support the restoration of the Constitution of 1992 and Sevastopol’s to Ukraine?”

“The salaries of public sector employees, medical and social workers will be preserved at their current level as a minimum or maybe even increased,” he said.

“We are now working in close contact with Russian officials over a new social system for the city.”

He thanked Putin and Russia’s parliament for their support.

On March 8, Crimean Prime Minister Sergey Aksyonov swore in the first group of self-defense forces. He called doing so a “historic event.”

On March 16, they’ll be deployed to assure things go peacefully. “The Armed Forces of the Republic of Crimea have been created for defense, not for offense,” Aksyonov stressed.

They want all Crimeans protected. Many eastern Ukrainians reject Kiev putschists. Mass rallies were held in Donetsk and Lugansk.

Residents want their own referendum. They want the right to declare independence or join Russia.

On March 6, he was arrested. On Saturday, hundreds of city residents rallied for his release. Tensions remain high.

Similar reports are circulating. London’s Daily Mail headlined “Has Blackwater been deployed to Ukraine? Notorious US mercenaries ‘seen on the streets of flashpoint city’ as Russia claims 300 hired guns have arrived in the country.”

“These are soldiers of fortune proficient in combat operations. Most of them had operated under private contracts in Iraq, Afghanistan and other states. Most (came) from the United States.”

On March 4, Voltairenet headlined “US mercenaries deployed in Southern Ukraine.”

They arrived “in groups.” They wore civilian attire. They carried “bulky packs.” From Kiev, “apparently” they went to “Odessa.” It’s in southern Ukraine.

On March 2, Before Its News.com (BIT) headlined 300 Blackwater Mercs Land in Ukraine?”

BIT called them Greystone Limited mercenaries. “The only question is…who pays” them? “Who do you think?”

They arrested Gubarev. City authorities lawlessly charged him with attempting to seize power. Other activists were arrested.

They toppled a truck carrying arrested activists. Donetsk security forces arrived. Resident shouted “Do you remember those you’re protecting? Those who mistreated you in Kiev?”

Lugansk is another hotbed of pro-Russian sentiment. Thousands rallied. They waved Russian flags. They chanted “Russia! Ukraine! Belarus! Together!”

They chose their own people’s governor, Aleksandr Kharitonov. They confronted pro-Kiev elements earlier. They don’t trust city police. They have their own self-defense forces.

Kharkov is Ukraine’s second largest city. It’s in eastern Ukraine. So are Donetsk and Lugansk. They’re near Russia’s border.

Kharkov residents held their own anti-Kiev rallies. Lots more in eastern Ukraine are likely. It bears repeating. The battle for Ukraine’s soul continues.

Peter Dale Scott once said they’re “authorized to commit violence in the the name of their employers.” They’re “predatory bandits.”

They operate extrajudicially. They’re unrestricted by US, international, or local governments’ laws. They’re free from civil or criminal accountability.

Under Article 47 of the 1977 Protocol I to the Geneva Conventions:

“A mercenary is any person who:

(a) is specially recruited locally or abroad in order to fight in an armed conflict;

(b) does, in fact, take a direct part in the hostilities:

(c) is motivated to take part in the hostilities essentially by the desire for private gain and, in fact, is promised, by or on behalf of a Party to the conflict, material compensation substantially in excess of that promised or paid to combatants of similar ranks and functions in the armed forces of the Party;

(e) is not a member of the armed forces of a Party to the conflict; and

(f) has not been sent by a State which is not a Party to the conflict on official duty as a member of its armed forces.”

Washington substitutes them for Pentagon forces. At multiples more in cost. Using them gives US authorities cover for whatever crimes they commit. Doing so avoids accountability.

Maybe in other Ukrainian cities. Maybe covertly in Crimea. If not now, maybe later. Expect East/West tensions to escalate. Expect the risk for open conflict to increase.

US-backed putschists usurping power in Kiev was phase one. Next comes forced-fed austerity. IMF and other Western loans demand it.

Neo-Nazis in charge presented what they have in mind. Looting Ukraine began. Pensioner income was halved. It went from $160 to $80 dollars monthly.

“The Finance Ministry has prepared a plan for optimizing budget expenditures, which implies budget sequestration is to be in force before the end of March,” said K-U.

“For this purpose, in particular, it has been proposed to reduce capital costs, eliminate tax schemes and preferences and to cut social benefits, for example, 50 percent of pensions to working pensioners.”

Expect higher energy and food prices. In February, the UN’s Food and Agriculture Organization (FAO) reported the highest increase in a basket of food commodities since mid-2012. A statement said:

“The figures were released amid news reports of spikes in wheat and corn prices in response to recent developments in Ukraine, though the February increase in the Index cannot be entirely attributed to those events.”

Ordinary anti-Yanukovych Ukrainians may yearn for his return. They supported criminal elements. They did it unwittingly. How they’ll react going forward remains to be seen.