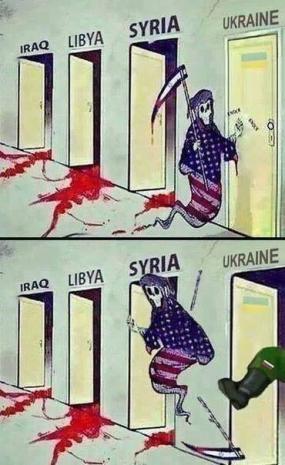 It requires replacing putschists with democratic governance. It involved instituting responsible policies. Ones that protect fundamental legal rights and freedoms of all Ukrainians. Ones that guarantee them.

Russia is on the right side of history. It promised help. It set four conditions. It wants legitimate Crimean independence recognized.

“If Ukraine fulfills these four conditions, then Russia will be able to propose further steps on additional help both on financial and gas issues.”

He urged deescalating Eastern Ukrainian crisis conditions peacefully. He said doing so “without discrimination against Russian-speaking population, without victims and bloodshed” is fundamental.

Moscow rejects Kiev putschists. It wants legitimate governance “with which one may negotiate,” said Siluanov. Vladimir Putin addressed 18 EU leaders. He did so by letter. He did it responsibly.

He called for urgent cooperation. He said Ukraine’s gas debt reached a “critical” level. It’s been unpaid for three months. He wants addressing it prioritized.

Its industrial and construction sectors “declin(ed) sharply.” Conditions head from bad to worse.

“Its budget deficit is mounting,” said Putin. “The condition of its currency system is becoming more and more deplorable.”

“The negative trade balance is accompanied by the flight of capital from the country. Ukraine’s economy is steadfastly heading towards a default, a halt in production and skyrocketing unemployment.”

Russia and EU nations are major Ukraine trading partners. They agreed to consult on ways to develop its economy.

They want their interests alone served. Putin said they “want to unilaterally blame Russia for the consequences of Ukraine’s economic crisis.”

“Right from day one of Ukraine’s existence as an independent state, Russia has supported the stability of the Ukrainian economy by supplying it with natural gas at cut-rate prices.”

(U)ninterrupted transit through” its territory was guaranteed. Russia fulfilled its contractual obligations. It did so “to the letter and spirit” of what was agreed on.

It “granted Ukraine a whole string of unprecedented privileges and discounts on the price of natural gas,” Putin added.

From 2009 to today, they total $17 billion. Plus “another 18.4 billion US dollars incurred by the Ukrainian side as a minimal take-or-pay fine.”

“No other country provided such support except Russia,” said Putin. “What about European partners?”

They want unlimited profits. They want them at Ukraine’s expense. They created a huge trade imbalance. It exceeds $10 billion. It’s two-thirds of Ukraine’s 2013 deficit.

It negatively affects Ukraine’s ability to fulfill “its contractual obligations to pay for deliveries of natural gas supplied by Russia,” said Putin.

Gazprom deserves payment. It intends “switch(ing) over to advance payment for gas delivery, and in the event of further violation of the conditions of payment, will completely or partially cease gas deliveries,” said Putin.

“In other words, only the volume of natural gas will be delivered to Ukraine as was paid for one month in advance of delivery.”

It’s “an extreme measure.” It’s coming. Businesses don’t provide products or services free. For sure, not Western ones.

“In order to guarantee uninterrupted transit, it will be necessary, in the nearest future, to supply 11.5 billion cubic meters of gas that will be pumped into Ukraine’s underground storage facilities, and this will require a payment of about 5 billion US dollars,” said Putin.

Resolving things requires “consultations…without delay,” he said. He urged them “at the level of ministers of economics, finances and energy…”

It “shouldered” the burden “alone” long enough. It’s time for Western nations to step up to the plate and help.

“(O)nly such an approach can lead to success,” Putin stressed. He did so forthrightly. He showed responsible leadership.

White House press secretary Jay Carney’s comment didn’t surprise.” He outrageously said “(w)e’ve made clear in the past that it is wholly inappropriate to use energy exports to achieve diplomatic or geopolitical objectives.”

Maybe he wants Russian gas supplied free. Maybe he supports what he’d denounce if US corporations were affected.

“(T)here there are many reasons to seriously take into account this message…and for Europe to deliver a joint European response” straightaway.

She and other EU foreign ministers plan meeting on Monday. Other talks will involve Russia, Washington, and Ukraine.

“When we take all these steps, we can be sure that we have reached a joined response for the countries that encounter this problem because they get natural gas from Gazprom,” she said.

“We want to be good clients, but it means that we can base ourselves on the supplies, and Ukraine knows this and should understand it,” she added.

It remains to be seen what follows. Putin showed extraordinary patience. He deserves praise, not irresponsible treatment.

Sohrab Ahmari is a Wall Street Journal Europe editorial page writer. He substitutes lies for truth. On April 11, he headlined “Waking Up to the Russian Threat.”

None whatever exists. He lied claiming otherwise. He called NATO secretary general Anders Fogh Rasmussen “one of Europe’s most serious thinkers on defense matters.”

He’s a convenient US stooge. He supports Pentagon policy. He’s an unindicted war criminal. He spoke to Ahmari. His comments didn’t surprise.

He lied saying Putin wants “to restore Russian greatness by re-establishing a sphere of influence in the former Soviet space.”

According to Rasmussen, “(i)ts in Russia’s interest to see frozen, protracted conflicts in the region, such as in South Ossetia and Abkhazia in Georgia, Transnistria in Moldova, and Crimea.”

He’s alarmed, he said. “(W)e have seen an incredible development of (Russia’s military) to act determinedly and rapidly.”

He ignored US-NATO’s aggression against Yugoslavia, Afghanistan, Iraq and Libya. He was silent about its killing machine.

He said nothing about its responsibility for millions of deaths. Their corpses bear testimony to lawless US-led NATO policy. Ahmari didn’t challenge Rasmussen responsibly.

Not according to Rasmussen. He bashed Putin irresponsibly. He considers NATO a threat. “He can’t seriously” think so, Rasmussen said.

“We have never had an intention to attack Russia,” he claimed. He left unexplained why NATO wants all former Russian republics and Warsaw Pact countries incorporated into its alliance.

Why it’s deploying hostile forces close to Russia’s borders. Why it irresponsibly lies about its threat. Why it’s poised perhaps to strike belligerently if it chooses.

They include “individual liberty, democracy, the rule of law and on top of that economic opportunities, because our community of nations also represents economic freedom,” he said.

He turned truth on its head saying so. He’s militantly anti-Russian. He lied claiming otherwise.

Ahmari let him comment without challenge. Doing so showed complicity with NATO lawlessness.

It showed support for war. It showed disdain for peace. It showed contempt for growing thousands across Eastern Ukraine.

They spread to Slavyansk and elsewhere. Government and police headquarters buildings were seized.

Ukrainian protesters take their role seriously. Perhaps others may follow. Defeating hegemonic ruthlessness depends on it. Hopefully activism will grow when most needed.

He sanctioned Moscow for rejecting them. He did so for embracing lawful Crimean reunification.

He deployed US military forces close to Russia’s borders. He did it belligerently. He risks a potential East/West confrontation.

He threatens global conflict. Stopping him is top priority. Ordinary people have power to do it.

“A little patience, and we shall see the reign of witches pass over, their spells dissolve, and the people, recovering their true sight, restore their government to its true principles.”

Ordinary people have power when they use it. Collective defiance works when sustained. It’s essential for real democracy.

Eastern Ukrainians can teach Americans a thing or two. They deserve worldwide support. Humanity stands to benefit. It needs all the help it can get.