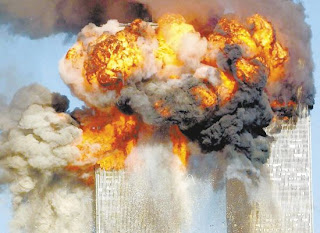 On Sept. 23, 1994 at a UN Ambassadors’ dinner, David Rockefeller said, “This present window of opportunity, during which a truly peaceful and interdependent world order might be built, will not be open for too long. We are on the verge of a global transformation. All we need is the right major crisis and the nations will accept the New World Order.”

The financier and original owner of the WorldTradeCenter complex was none other than David Rockefeller. The United Nations (new world order world government headquarters) exists on land donated by his father.
Three days after the 9/11 attacks, CFR member Gary Hart said, “There is a chance for the President of the United States to use this disaster, to carry out a phrase that his father used … and that is a New World Order.“
Back in 1976, Congressman Larry P. McDonald said, “The drive of the Rockefellers and their allies is to create a one-world government combining supercapitalism and Communism underthe same tent, all under their control…. Do I mean conspiracy? Yes I do. I am convinced there is such a plot, international in scope, generations old in planning, and incredibly evil in intent.” He was later killed in a Korean Airlines 747 that was shot down under suspicious circumstances. 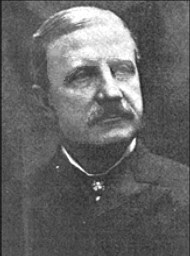 The first notable member of the family, William Avery Rockefeller, was a con man, thief and indicted child molester who eventually deserted his wife and six children to marry a twenty year-old (Nelson Rockefeller later did the same abandoning his wife of 31 years for Happy Fitler Murphy). Author William Hoffman tells us that “The thing the children most remembered about their father [William Avery] was the delight he took in getting the better of them in business deals. He would con them out of something they considered important, then lecture them on the necessity of always being alert.”
“William ‘Big Bill’ Rockefeller, who sold cancer ‘cures’ from a medicine wagon, taught him to leap into his arms from a tall chair. One time his father held his arms out to catch him but pulled them away as little John jumped. The fallen son was told sternly, ‘Remember, never trust anyone completely, not even me.’” -Jim Marrs, Rule by Secrecy (46-7) 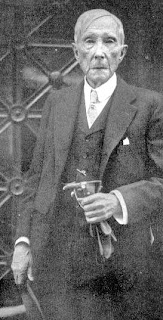 His son John D. Rockefeller was often called the most ruthless American and was the world’s first billionaire. He was a civil war profiteer who by 1870 owned Standard Oil, the largest corporation in the country, which by 1880 controlled 95% of the oil production in America.
“When John D. founded Standard Oil, it was just one of the 27 other refineries in the Cleveland area, and by no means the biggest. But the ambitious businessman – who once declared that ‘competition is a sin’ – soon devised a plan to take on or destroy his competitors. The simplicity, audacity, and ruthlessness of his scheme is breathtaking. He bribed and coerced the railroads serving the oil producing region to give him a kickback, or rebate, not only on his own shipments, but also on every barrel his competitors sent by rail. The more they shipped, the more he made! Rockefeller’s rebate formula enabled him to reduce his own prices and drive the other oil refineries out of business using their own money!” -Gary Allen, “The Rockefeller File”
“As the history of Standard Oil by any author, pro or con, clearly shows, Rockefeller was of a deeply conspiratorial, scheming nature, always planning years ahead with a clarity of vision that went far beyond anything any of his associates had to offer.” -Ferdinand Lundberg, “The Rich and Super-Rich” 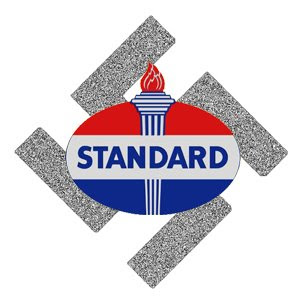 In 1872 his reputation was further blemished by a conspiratorial scandal between the refiners and the railroads with South Improvement Company. By 1881 he controlled a near monopoly of the petroleum industry in America. By 1888 Standard Oil had expanded into the markets of Asia, and Western Europe, selling more oil oversees than in the US. This same year the New York Senate committee launched an investigation and lawsuit into Standard Oil’s questionable business practices. In 1896 Standard Oil contributed $250,000 to Republican William McKinley’s campaign for president against antitrust legislation supporter Democrat William Jennings Bryan. By 1907 there were seven different lawsuits pending against Standard Oil, arguing, among other things, contempt of court for disobeying an 1892 suit to dissolve the trust. Also that it was twenty times the size of its closest competitor.
“U.S. Supreme Court on May 15, 1911, couched its decision in these clear terms: ‘Seven men and a corporate machine have conspired against their fellow citizens. For the safety of the Republic we now decree that this dangerous conspiracy must be ended by November 15th.” -Jim Marrs, Rule by Secrecy (48)
In the dissolution, Standard Oil broke into eight other companies, which have since consolidated right back into what we now know as Amoco, Chevron, and Exxon/Mobil. 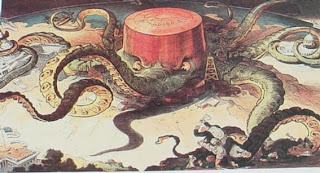 “The real menace of our republic is this invisible government which like giant octopus sprawls its slimy length over city, state and nation. Like the octopus of real life, it operates under cover of a self created screen … At the head of this octopus are the Rockefeller Standard Oil interests and a small group of powerful banking houses generally referred to as international bankers. The little coterie of powerful international bankers virtually run the United States government for their own selfish purposes. They practically control both political parties.” -NY Mayor John F. Hylan, 1922 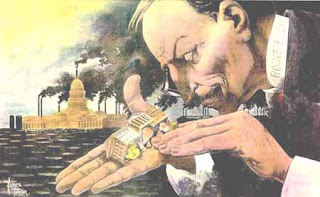 John D. Rockefeller created the NEA (National Education Administration) and the GEB (General Education Board) in 1902. In Raymond Fosdick’s memorial history of the Board, he indicates that it was part of John D. Rockefeller Jr’s effort toward “this goal of social control.” In 1923 he created the International Education Board providing $20 million to promote education abroad. They opened Rockefeller College and Rockefeller University. The Rockefellers funded Planned Parenthood, the Eugenics Society, and the Population Council as part of their control agenda. They built the World Trade Center complex and donated their land for the NWO League of Nations and United Nations. 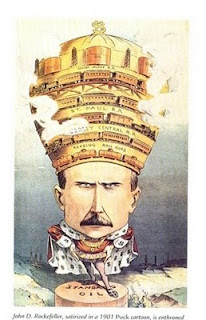 “Philanthropy is the essential element in the making of Rockefeller power. It gives the Rockefellers a priceless reputation as public benefactors which the public values so highly that power over public affairs is placed in the Rockefellers’ hands. Philanthropy generates more power than wealth alone can provide.” -Myer Kutz, “Rockefeller Power”
“The Rockefellers are not humanitarians; they are power-seeking Machiavellians. They are using. their phony philanthropy as a guise for seizing power on a magnitude that would make old John D. Sr. proud. This has been the game plan for at least the past 54 years-ever since Daddy Oilbucks himself donated money to build the League of Nations headquarters in Geneva. Unfortunately for his own ambitions, there were still enough un-bought Senators and un-controlled newspapers in the United States to thwart his plans. His countrymen escaped the noose he and his comrades had prepared for them by refusing to join the budding World Government.” –Gary Allen, The Rockefeller File 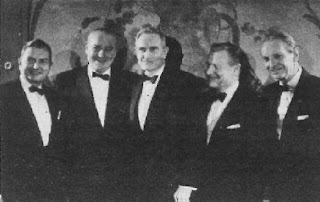 “These international bankers and Rockefeller-Standard Oil interests control the majority of newspapers and the columns of these papers to club into submission or drive out of public office officials who refuse to do the bidding of the powerful corrupt cliques which compose the invisible government.” –Theodore Roosevelt 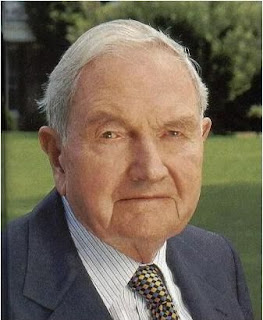 David Rockefeller was long time chief executive officer of Chase Manhattan Bank as well as founder and chairman of the Trilateral Commission and the Bilderberg Group. He is also honorary chairman of the Council on Foreign Relations which he has previously held posts in as director, chairman and vice-president.

Jay Rockefeller was governer of West Virginia from 1976-1984 then elected and re-elected into the senate in 1984, 1990, and 1996. He’s a member of the internationalist Trilateral Commission and Council on Foreign Relations. 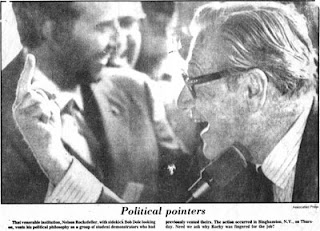 Nelson Rockefeller held posts as secretary of state in 1944, head of the International Development Advisory Board from 1950-52, under secretary of the Department of Health, Education and Welfare from 1953-55. He was elected and re-elected as governor of New York in 1958, 1962, 1966, and 1970. He ran for president in 1960, 1964, and 1968 and finally was sworn in vice-president in 1974 under Gerald Ford. Nelson created the CIAA, his own version of the CIA to oversee South America. He planned major highways across the Amazon, dams, ranches, man-made lakes, drilling, mining, any money-making, native-exploiting, nature-violating venture he could pursue. He proposed harsh drug laws to the New York state legislature calling for lengthy prison terms for petty crimes. In 1962 Nelson wrote in “The Future of Federalism” that “the nation-state is becoming less and less competent to perform its international political tasks… These are some of the reasons pressing us to lead vigorously toward the true building of a New World Order.” The entire book reads as promotional material for world governance.

Winthrop Rockefeller, elected governor of Arkansas in 1967, had his own quirks as well:
“Winthrop, who is homosexual, enjoyed living in Arkansas with his black male friend. He reportedly had the world’s largest porn collection. Winifred Rockefeller Emeny, Nelson’s cousin, murdered her two children and committed suicide. Michael Rockefeller died when he tried to bribe New Guinea tribesmen with large sums of money to go head hunt and make shrunken heads for him. The natives had given up head hunting and Michael couldn’t successfully bribe them. Finally getting tired of Michael, the natives decided to head hunt Michael himself!” -Fritz Springmeier, Bloodlines of the Illuminati
“The Rockefellers have had control over the FBI since they helped get it started. When Congress wanted to investigate the CIA for wrongdoing they appointed a Commission headed by Rockefeller to investigate the CIA’s wrongdoings! Yes, the Rockefeller Commission did a big study and slapped the hands of the CIA for a few misdeeds. Their report is still cited as the big investigation of the CIA. Some investigation!” -Fritz Springmeier, Bloodlines of the Illuminati
“In 1976 when Australian president Malcolm Fraser visited the United States, he conferred with David Rockefeller before meeting President Gerald Ford. “This is truly incredible,” wrote author Ralph Epperson, “because David Rockefeller has neither been elected or appointed to any governmental position where he could officially represent the United States government.” -Jim Marrs, Rule by Secrecy (55)
Bookmark the permalink.