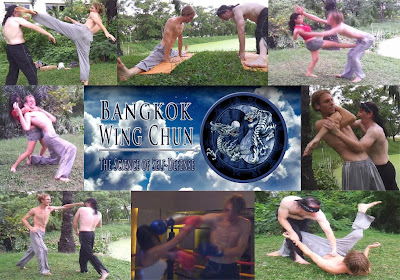 My new Wing Chun student and friend Gerrard, an Oxford Physicist on 3-week holiday in Thailand, was curious about Wing Chun’s claims to be scientific.  After training together every day for 2 hours, he has been impressed by it’s efficacy and the following video shows how far he’s progressed in a short time.  Since he and I are both big heavy metal fans, the music is by Suicide Silence “You Only Live Once” and Between the Buried and Me “Selkies: The Endless Obsession.”

“I did Wing Chun for a few months some years ago and decided to get back into it this Summer by means of intensive training. I trained with Eric every day for three weeks and hoped that this might get me back to the level I was at previously. As it happened, I was back at that level in just a few days and, to my astonishment, continued to make dramatic progress day by day right to the end. Eric has a wonderfully calm, clear and friendly teaching style which makes his lessons something to look forward to. On reflection, I think that it was Eric’s unique approach to freestyle Chi Sao that was the key to my amazingly accelerated
progress. I would certainly recommend Eric’s tuition to anyone interested in making rapid progress in Wing Chun.”  -Gerrard Daly

Lately I’ve also been teaching my fiance First some basic Wing Chun / Jiu-Jitsu and practicing flowing between chi sao, take-downs and tap-outs.  Her rear-naked choke, leg choke, triangle and arm bars are getting to be pretty nasty!  Gerrard filmed this video compilation of her kicking my ass for your sadistic viewing pleasure.  The music is one of First’s personal favorite songs “Rich Bitch” by Die Antwoord.