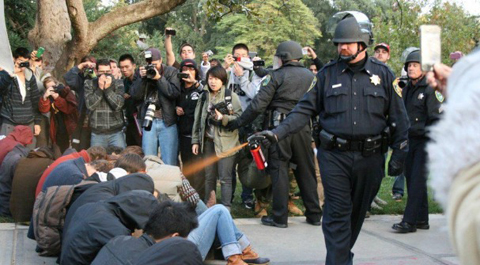 Image: While the UN demands that Syria not only allow admittedly armed terrorists to roam freely through its cities, but that they also capitulate to their demands, the West has driven peaceful “Occupy” protesters from the streets of their cities by force. One wonders what events would have followed if protesters being sprayed and beaten in the streets pulled out assault rifles and fired on police. Would Washington withdraw security forces and entertain their demands?

While the West demands Syria pull its security forces from cities where roving bands of terrorists are on record committing widespread atrocities including the kidnapping, torture, and murder of civilians, as documented by the West’s own Human Rights Watch report, “Syria: Armed Opposition Groups Committing Abuses,” it has denied its own citizens the right to even peacefully assemble at “Occupy” protests to address their grievances back home.
Syria’s government has been threatened continuously by the West to begin a process of political “transition,” or more accurately, to submit to Western-backed regime change, in the face of armed militants, while the West itself maintains a strict policy of non-negotiation with terrorist demands. 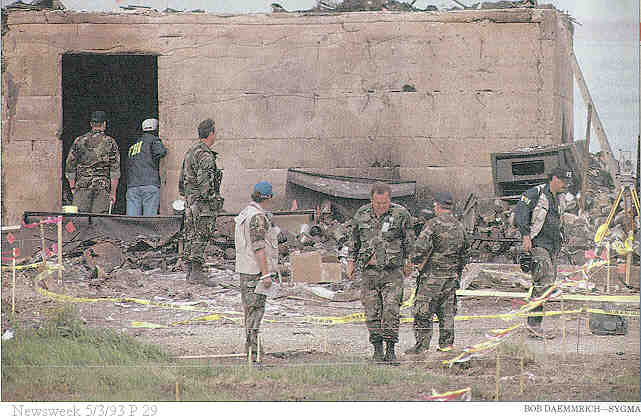 Image: Homs, Syria? No, this is Waco, Texas after a combination of military and federal security forces raided, burned down, and killed nearly every man, woman, and child in this sprawling complex located on private property. The US will kill its own citizens with weapons of war just for breaking their laws, mentioning nothing of what they would do should Americans take to the streets and carry out a campaign of terror while demanding the government step down.
As the West conjures up a myriad of excuses to sweep prolonged “Occupy” protests off the streets of their biggest cities, they insist that the Syrians not only tolerate an armed “occupation,” but capitulate immediately to their demands. But one must wonder just what any given Western nation would do if protesters demanded the nation’s leadership to stand down, and did so through armed violence.

Video: Hardly unarmed civilians, meet Syria’s tank-driving, rocket-firing, Kalashnikov-waving rebels. Had rioters in Los Angeles raided government armories and patrols, capturing armored vehicles and rocket launchers, or had violence escalated to the point where such weapons were crossing in from Mexico, surely Washington would have mobilized armored divisions, gunships, and aircraft to crush them and would be considered negligent if they failed to do so.

In Europe there are the Basque separatists of Spain ~ considered terrorists across the European Union, England, and the United States.
The Irish Republican Army likewise was considered a vicious terrorist organization the United Kingdom sought to crush with a brutal military campaign of their own, turning entire cities into Syrian-esque war zones.

In the United States, there have been no real organized armed uprisings, yet the government has still mobilized its military to slaughter its own citizens as seen during the siege in Waco Texas in 1993.

Scenes of tanks and helicopters against the backdrop of a Texan landscape and the subsequent destruction of the Branch Davidian compound are on par with anything allegedly unfolding in Syria, including the murder of women and children.

However, unlike in Syria, where terrorists are actively carrying out widespread violence, including bombing campaigns, targeted assassinations, and kidnappings, the people of Waco, Texas were on their own property attempting to mind their own business. 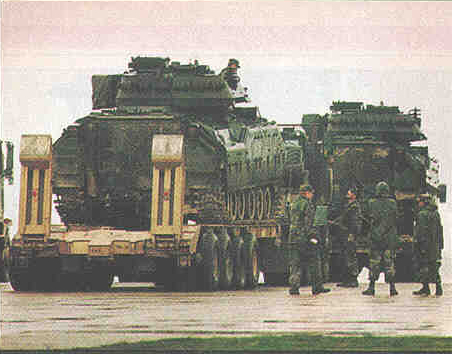 Image: Not tanks headed for Hama, Syria, but rather tanks waiting in a Texan parking lot for their chance to roll over men, women, and children barricaded on their own private property. The siege at Waco, Texas illustrates that federal authority will not be challenged and that the penalty is certain death ~ even if a column of tanks must be mobilized. The cheap veneer of civility across Western civilization is peeled back at times like this as is the hypocrisy of their international “responsibility to protect.”

When armed groups do take to the streets, such as during the 1992 LA Riots, the government was far from “withdrawing” security forces from the city and accepting demands. In addition to the police who were gunning down both armed threats as well as looters, thousands of National Guardsmen and Marines were also mobilized to restore order.

Unlike in Syria, where rebels are armed with rocket propelled grenades, tanks, French-made missiles, assault-rifles, machines guns, and mortars, the rioters in LA were armed with pistols, rifles, shotguns, or simply their own cars ~ yet still the military was mobilized, and indeed killed Americans in their own streets. 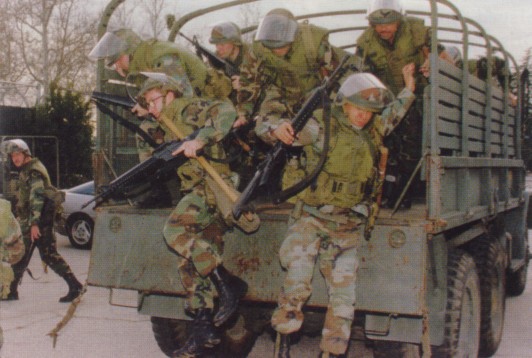 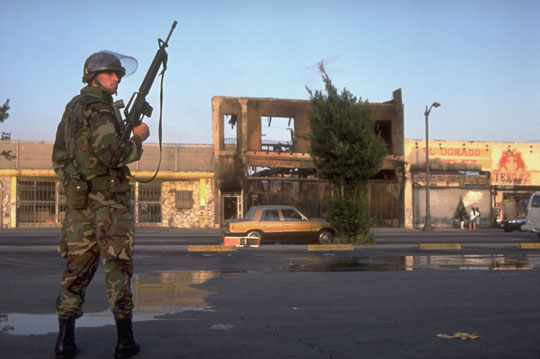 Image: Not Syrian soldiers in the suburbs of Damascus, but rather National Guardsmen and Marines amongst thousands brought in to restore order in California’s city of Los Angeles during the 1992 riots. Such a mobilization of military force represents astounding hypocrisy when the Syrian government is then told to stand down in the face of Syrian rebels openly waging war against both the government and minority ethnic groups.
It is sensible for a government to restore order in their own country, preserving the life and liberty of the vast majority of citizens not taking to the streets to carry out theft, violence, and mayhem.
The people of Los Angeles, had the government not acted and had the violence continued to spiral out of control, would have begged for security forces to restore order and viewed the government as negligent in their duties should they have failed to do so.

They also most likely would have taken the law into their own hands, just like thousands of Syrians are doing now against NATO-backed death squads.

So why is the West holding Syria to standards they themselves have demonstratively rejected?

It goes beyond hypocrisy ~ it is a declaration to the world that the “international rule of law” exists solely as a means to justify the expansion of the West’s global hegemony. It is naked military conquest hiding behind the fig leaf of “humanitarian concerns.”

Syria, as does any sovereign nation or individual on Earth, has the right to defend itself and restore order within its realm.

The United States, England, and France would never withdraw security forces from their own cities where militants were armed with rockets, tanks, and machine guns while killing security forces and civilians alike and they certainly would not step down from power in the face of such armed threats.

In fact, after invading foreign nations on patently false pretenses and stirring up warranted armed resistance, they then use such violence to justify perpetual occupation. They promptly label these people “terrorists” and then execute a bloody campaign to eliminate them.

The depths of depravity, the hypocrisy, the illegitimacy flaunted by the United Nations and the Western interests pulling its string, demanding Syrian troops to withdraw from cities plagued by terrorists, but making no mention of the terrorists themselves or their own serial violations of the “peace plan,” even as they drive tanks around on camera in front of the world, forever renders moot this latest attempt to assert the “primacy of international law” over that of the nation-state.

What Wall Street and London do through their “international institutions” from this point forward, is done as poorly disguised imperialism with their “humanitarian concerns” nothing more than the weakest sort of rhetoric in the long history of weak rhetoricused to propel the interests of empire.