For this reason, when I read that a British national of Taiwanese descent has been arrested in a Bangkok hotel for allegedly attempting to sell six dead babies, my response was one of instant skepticism. Details are predictably sparse, but the police report indicates that Chou Hong Hun, 28, was attempting to sell the deceased infants on the internet, for use in ritual witchcraft. Apparently the man acquired the dead babies from another man, as yet unidentified, for 200,000 baht, or roughly 6,600 USD.

To decide whether my skepticism is merited in this case, I have decided to analyze what I know of deceased infants in magic. Follow along, if you can handle a little dark knowledge you might wish you didn’t have.
You may know that it is a distressingly common practice in some parts of Africa to sacrifice living children in an attempt to alleviate poverty or disease, to the extent that sign like these have to be made: 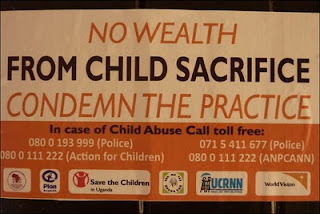 Chuse the Carcase of a red Man (because in them the blood is more
sincere, and gentle and therefore more excellent) whole (not maimed)
clear without blemishes, of the age of twenty four years, that hath
been Hanged, Broke upon a Wheel, or Thrust-through, having been for one
day and night exposed to the open Air, in a serene time. This Mumy
(that is, Musculous flesh, of the Thighs, Breasts, Armes, and other
parts) from the two Luminaries, once illuminate and constellate, cut
into small pieces or slices and sprinkle on them Powder of Myrrh, and
of Aloes, but a very little (otherwise it will be too bitter) afterward
by Macerating, Imbibe them for certain days in Spirit of Wine, hang
them up a little, and again imbibe them, then hang them up to dry in
the Air, this so dryed will be like Flesh hardned in Smoak, and be
without stink. 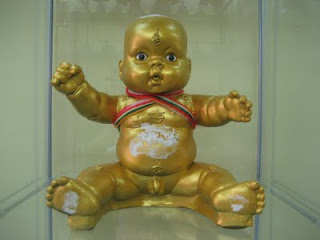