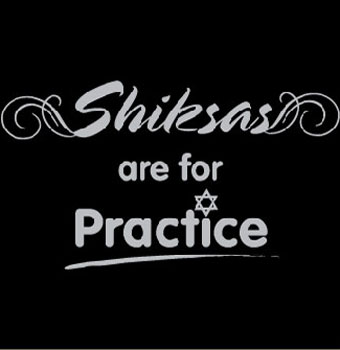 When I was about 17, my Jewish girlfriend actually said the above to me when I asked her about her brother dating non-Jewish girls!

ED NOTE: LEST WE FORGET:

And Moses, and Eleazar the priest, and all theprinces of the congregation, went forth to meet them without the camp. AndMoses was furious with the officers of the host, with the captains overthousands, and captains over hundreds, which came from the battle. And Mosessaid unto them, Have ye saved all the women alive? Behold, these caused thechildren of Israel, through the counsel of Balaam, to commit trespass against theLORD… Now therefore kill every male among the little ones, and kill every womanthat hath known man by lying with him. But all the women children, that havenot known a man by lying with him, keep alive for yourselves. And the booty,being the rest of the prey which the men of war had caught, was six hundredthousand and seventy thousand and five thousand sheep, And threescore andtwelve thousand beeves, And threescore and one thousand asses, And thirty andtwo thousand persons in all, of women that had not known man by lying with him.Book of Numbers 31:13-18, 32-35
ynet
April9, 2012
Threemen and a woman were indicted Monday at the Tel Aviv District Court for varioussex trafficking and pandering changes.
Accordingto the prosecution, Oleg Zaberski, 35, and his accomplice, Olga Fisher, 29,both Bat Yam residents, brought Ukrainian women to Israel to work inprostitution.
Zaberskipromised the women through a mediator they could keep half of what they earnedfor having sex with clients, and instructed them to tell the immigrationauthorities that they are visiting a relative ~ Fisher, who would pick them upat the airport.
Thewomen were then forced to see eight or nine clients a day; when one refused tohave sex with a customer, Zaberski fined her and made her have intercourse withthe man, who injured her.
Thecomplainants have since left Israel.
‘Indictmentis groundless’ Zaberski’s charges include human trafficking, assault andpandering. Fisher is being indicted for aiding and abetting human traffickingand related charges.
“Primafacie, the indictment clearly indicates that my client had nothing to do withsex trafficking, and she has no ties to the scheme described in theindictment,” Fisher’s lawyer, Eyal Ohayon said. “Her role is confined to theinnocent act of picking up one of the women from the airport.”
AttorneysShahar Hetzroni and Tamir Sananes, who represent Zaberski, said in response:“The indictment appears groundless, and the defendant denies all the charges.”
Meanwhilecharges were pressed against Yaakov Malka, 36, an Eilat resident and VachislavMagnizer, 40, of Rishon Letzion, for running brothels in Tel Aviv. The twoallegedly employed Israeli and foreign nationals as prostitutes. Afterincurring heavy gambling debts, the two decided to expand the operation andtraffic a large number of women from Ukraine to Israel.
Theyare being indicted for conspiring to commit sex trafficking and panderingviolations, among other charges.