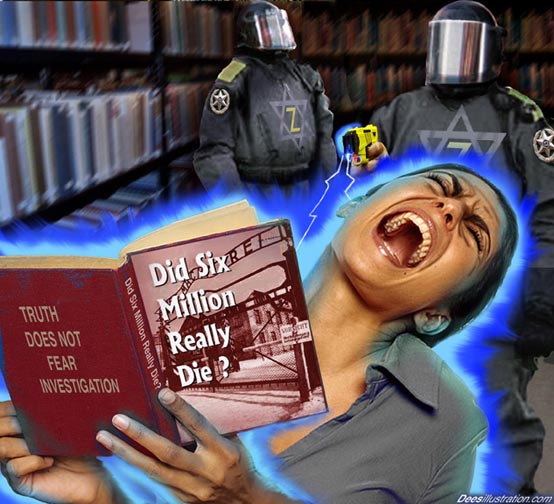 By Pandora Pushkin
DARKMOON
May 12, 2012
Editor’s Note: “Is the Holocaust a suitable subject for satire?” I asked myself seriously, before deciding to accept this new article from satirical spoof writer Pandora Pushkin. In view of the fact that Christianity appears to be fair game for blaspheming Jews ~ “Christ sucks” (pornographer Al Goldstein) and “I hope the Jews DID kill Christ! I’d fucking do it again in a second!“(Comedienne Sarah Silverman) ~ I saw no reason why Holocaustianity, the new world religion, should be exempt from criticism or satirical treatment. Provided it’s done with good taste, of course.

“Some events do take place but are not true;

others are, although they never occurred.”

Holcaustianity, the world’s newest religion, is now doing its best to replace Christianity in America, Europe and other English-speaking countries. It has been largely successful in its endeavors, having made an impact even on the Vatican where it has persuaded many holy fathers of the Church to ditch Christianity in favor of a new religion invented at Auschwitz. About time too! We’ve had enough of Christianity and its silly Ten Commandments.

Speaking for myself, I wish to make up my own mind about what is right or wrong. Yessir, I’m not going to take instructions from any killjoy Pope! 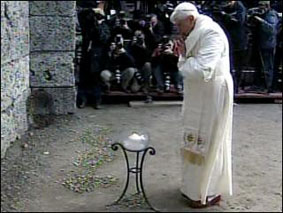 Here is Pope Benedict himself, paying his respects to the new Supergod at Auschwitz, disguised as a tripod.

And here, in case you are interested, is the swimming pool at Auschwitz which the Supreme Pontiff visited also on his well-publicized visit to Poland. 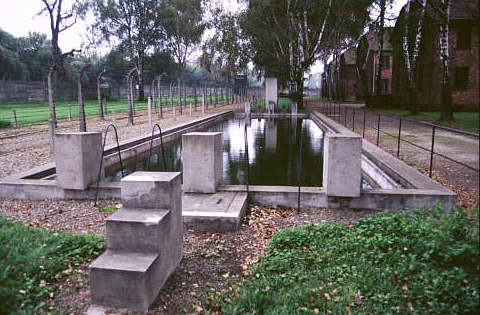 In this hallowed spot the Holy Father may have paused a few brief moments to offer up a prayer for all those millions of martyrs ~ 6 million at the last count ~ who perished in the furnaces of Auschwitz, but were probably allowed to refresh themselves with a little swim before they died.

This would happen, I should imagine, in two circumstances:

if the camp was short of Zyklon B  gas, or  if there was a need to economize and save this precious substance for delousing inmates’ clothing ~ in which case inmates were led to the pool and pushed in, being left to swim around there until they drowned. If they tried to climb out of the pool, no problem! ~ they were just kicked back into the water by one of those hobnailed jackboots the evil Nazis wore at all times, even in bed. So I am told by an informed source in Tel Aviv.

For more details on the swimming pool at Auschwitz, see this scary article by evil Holocaust denier Robert Faurisson. You can see his blood-covered face here. This is what courageous Jewish activists did to him when Mr. Faurisson foolishly refused to admit that 6 million Jews died in the Holocaust.

The Holocaust, according to that other evil Holocaust denier Germar Rudolf ~ who spent onlyfour years in prison for his shocking thought crimes, has its own high priests: the Jewish people themselves. These constitute, collectively, the New World Messiah whose name is King Khazar.

King Khazar did not die on the cross. Instead, he fragmented himself into a myriad life forms and lives today in the minds and bodies of his countless devotees, known in the vulgar language of the masses as “Holocaust Survivors.”

These minor deities live all over the world, some in New York, London, Paris and other cosmopolitan centers, but most of them pursue their earthly existence in Tel Aviv. Here they live austere lives of prayer and sacrifice to King Khazar, all their material needs being taken care of by generous checks from Swiss and German banks.

When they are not engaged in killing the Palestinians in a blood sacrifice to King Khazar, they are to be found sitting by their  luxury swimming pools in Judea and Samaria enjoying the afternoon sunshine and the soothing hum of bulldozers demolishing houses in the distance . . . until their lives are suddenly terminated by deadly rockets shot at them by evil Hezbollah or Hamas—terrorist organizations which will soon be operating in New York and Los Angeles, London and Paris, unless and until America in its wisdom decides to exterminate them. So my informed source in Tel Aviv tells me.

Hollocaustianity, as you might expect, has its Devil. Every bit as evil as Christianity’s equivalent, he has replaced Satan as the most feared and hated figure ever to have existed. With a mad glint in his eye, and a frightening toothbrush mustache garnishing his upper lip, this Demon in human guise received his incarnation on earth in April 1889 at an inn in Ranshofen called the Gasthof zum Pommer in the thrice-cursèd anti-Semitic kingdom of Austro-Hungary. He is known today in Vatican circles, where everyone is still forced to speak ecclesiastical Latin, as Adolphus Hitlerus Abominabilis. 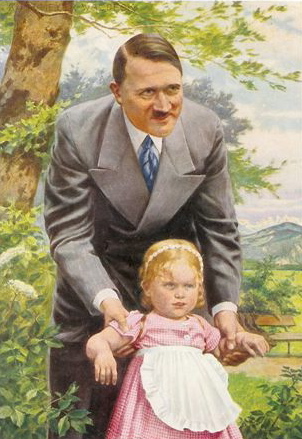 Mention his name, dear reader, in hushed terms if you dare. Better still, don’t mention it at all, but leave it to Devil Worshippers such as David Irving and his brood of evil demons to do so.

The High priests of the new world religion are the orthodox Holocaust historians. Praised be their names, for their research has been mighty and marvelous and has unearthed many mind-blowing facts: namely, that six million Jews died in gas chambers at Auschwitz, Chelmno, Majdanek, Belzec, Sobibor, Treblinka and elsewhere, on the express orders of  Adolphus Hitlerus Abominabilis and his evil henchmen in human form, known in Vatican circles as Jackbootici Horribiles ~ in simple English, “the Horrible Jackbooted Ones”. (i.e.,Nazis.)

Unlike the Christian martyrs, these latter-day saints were neither crucified nor thrown to the lions in the Circus Maximus. Instead, they were tortured to death in cruel experiments by Josef Mengele (“Dr Death”), buried alive in ditches, burnt alive at the stake, asphyxiated in gas chambers, and finally turned into lampshades. 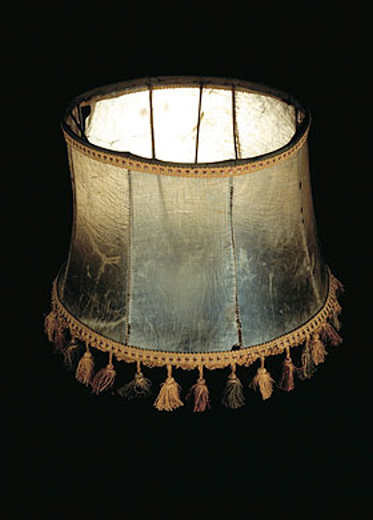 Typical lampshade? No way! DNA tests reveal that this very attractive lampshade was made of genuine human skin, probably one of millions made by evil Nazis and sold them to unsuspecting department stores all over the world. (See here)
.

The new world religion, Hollocaustianity, also has its temples: these are known as Holocaust Museums. They are being built now in ever increasing quantities thanks to the generosity of taxpayers (Jewish as well as non-Jewish) whose earnings are being earmarked not only for the construction of these grim edifices in honor of King Khazar but for new wars being fought on his behalf in Iraq, Afghanistan and other Islamic countries such as Pakistan.

Here in Afpak, incidentally, even the women and children are so evil that they need to be destroyed by deadly drones from the sky, known in Vatican circles as Arma Ignavi (“The Coward’s Weapon”).

Wedding parties are obliterated. Ambulances speeding to rescue the dying are blown to smithereens. Even mothers scrabbling in the ruins to pull their mangled children from the rubble are blown off the face of the earth. Why? Because they are all terroristswho refuse to worship King Khazar, the Jewish God of War whose worship in America has now become obligatory.

Yea, the New World Religion also hath its “Day of Remembrance” (27 January), on which day the world is solemnly besought to Remember The Six Million Who Died. It has its saints and its martyrs: the victims who die and the victims who survive and today receive the holy eucharist ~ the Bread of Life—known as “Holocaust reparations”.

It has its prophets too: noble eyewitnesses such Elie Wiezel and Binjamin Wilkomirski, both known and honored for their unswerving devotion to the Truth.

It has its patron saint, Anne Frank, known in Vatican circles as Puella Pulchra Ballpointica, the Beautiful Girl with the Ballpoint Pen. 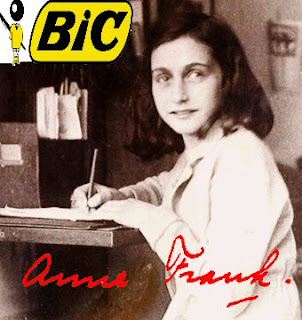 PUELLA PULCHRA BALLPOINTICA, the “Beautiful Girl with the Ballpoint Pen,” the only saint in history to travel into the future to borrow a ballpoint pen and then relocate back to the past in order to complete her famous manuscript, “The Diary of Anne Frank”.
Hollocaustianity has its pilgrims, its publishing houses, its clergy, its laity. It even has its Inquisition in sixteen countries, where denial of its sacred tenets are serious crimes resulting in imprisonment: Austria, Belgium, Canada, Czech Republic, France, Germany, Hungary, Israel, Liechtenstein, Lithuania, Luxembourg, Netherlands, Poland, Portugal, Romania, Slovakia, and Switzerland. 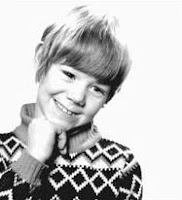 A shocking email appeared in my inbox this morning which almost made my eyes pop from their sockets. It contained this appalling quotation from evil Holocaust Denier Germar Rudolf, actually arguing that Israel has exploited the Holocaust to carry out a genocidal program of its own against the Palestinians. Look at his picture on the left. Who would have thought this pretty little boy (age 8 in the picture) would grow up one day to become such an evil monster of Thought Crime?
.
“This new religion,” he raves, “serves many Jews in general and the Apartheid State of Israel in particular as a sword and shield in their interactions with gentiles and foreign nations. To prevent a new “Holocaust,” Israel is allowed to commit any cruelty, wage any war, and violate any international law it likes. They get away with (almost) anything. But this new superstition also serves many other nations as a bogeyman to make their own populations accept wars. First they accuse a foreign leader of a Holocaust – committed or planned ~ then they start the war. It works shockingly well.” (To verify this appalling quote, click HERE). 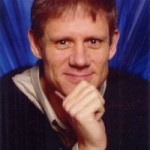 Here is the evil Thought Criminal again, age 39, doing his best to look charming and acceptably human. He fails!  Note the Satanic smile and the white-hot glow of hellfire in his evil eyes. This monster of Historical Distortionism has recently been interviewed by the equally insane Dr David Duke on the Jeff Rense Radio satellite network that goes all over the world. If you want to hear these fiends in human form discuss the new world religion, Holocaustianity, this is your chance.
Don’t miss this incredibly EVIL SHOW (55 mins.) which breaks new ground in THOUGHT CRIME!
Listen to it HERE!
“Pandora Pushkin” is a pseudonym for a writer who has written many other articles for the internet under other names.