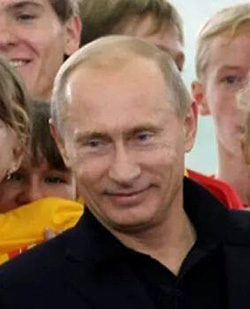 Today we need new strategies to preserve our identity in a rapidly changing world, a world that has become more open, transparent and interdependent. This fact confronts virtually all countries and all peoples in one form or another: Russian, European, Chinese and American – the societies of virtually all countries.

Vladimir V. Putin has maintained his ideological position, and reiterated Russia’s determination to maintain her sovereignty and identity in the face of globalisation. Putin’s course for Russia was unequivocally stated in a September 2013 speech at a plenary session of the Valdai Club, which included foreign dignitaries and Russian luminaries from politics, academia and media. (http://valdaiclub.com/politics/62880.html)

Putin stated that while every nation needs its technical strength, at the basis of all is “spiritual, cultural and national self-determination” without which “it is impossible to move forward.” “[T]he main thing that will determine success is the quality of citizens, the quality of society: their intellectual, spiritual and moral strength.” Putin rejects the economic determinism of the modern era, stating:

After all, in the end economic growth, prosperity and geopolitical influence are all derived from societal conditions. They depend on whether the citizens of a given country consider themselves a nation, to what extent they identify with their own history, values and traditions, and whether they are united by common goals and responsibilities. In this sense, the question of finding and strengthening national identity really is fundamental for Russia.

Putin pointed to the threat posed to Russian identity by “objective pressures stemming from globalisation,” as well as the blows to Russia inflicted by the attempts to erect a market economy, which it might be added, was sought by internal oligarchs and outside plutocrats; attempts that are ongoing. Putin moreover points to the lack of national identity serving these interests:

In addition, the lack of a national idea stemming from a national identity profited the quasi-colonial element of the elite – those determined to steal and remove capital, and who did not link their future to that of the country, the place where they earned their money.

What the globalists and oligarchs wish to impose on Russia from the outside cannot form an identity, which must arise from Russian roots, and not as a foreign import in the interests of commerce:

Practice has shown that a new national idea does not simply appear, nor does it develop according to market rules. A spontaneously constructed state and society does not work, and neither does mechanically copying other countries’ experiences. Such primitive borrowing and attempts to civilise Russia from abroad were not accepted by an absolute majority of our people. This is because the desire for independence and sovereignty in spiritual, ideological and foreign policy spheres is an integral part of our national character. Incidentally, such approaches have often failed in other nations too. The time when ready-made lifestyle models could be installed in foreign states like computer programmes has passed.

“Russia’s sovereignty, independence and territorial integrity are unconditional,” states Putin. He has called for unity among all factions, above ethnic separatism and urges an ideological dialogue among political factions.

Putin also recognises that what is today called the “West,” with the USA as the “leader of the Western world,” as the media and US State Department constantly remind us, shows little evidence of any vestige of its traditional foundations:

Another serious challenge to Russia’s identity is linked to events taking place in the world. Here there are both foreign policy and moral aspects. We can see how many of the Euro-Atlantic countries are actually rejecting their roots, including the Christian values that constitute the basis of Western civilisation. They are denying moral principles and all traditional identities: national, cultural, religious and even sexual.

In this demise of Western values, Putin attacks “political correctness,” where religion has become an embarrassment, and Christian holidays are, for example, changed or eliminated. This nihilism is being exported over the world and will result in a “profound demographic and moral crisis,” resulting in the “degradation” of humanity. While multiculturalism is problematic for many states in Europe, Russia has always been multiethnic and this diversity should be encouraged in forging local identities, but within the context of a Russian state-civilisation.

Simultaneous with the moral and religious decline is the attempt to impose a “standardised, unipolar world” where nations become defunct, rejecting the “God-given diversity” of the world in favour of “vassals.” Above this, Putin is promoting a “Eurasian Union,” a geopolitical bloc that will enable the states of the region to withstand globalisation.

Putin’s Valdai speech shows that he has a fully developed world-view on which to base Russia’s future course. It also indicates that while Putin might have his faults (and I can’t think of what they might be offhand) he is the only actual statesman in the world today, and has established Russia as the most likely axis of a new civilisation and a new era.

Gain a deeper understanding of the conflict between Putin’s Russia and the West. Check out New Dawn Special Issue Vol 8 No 5, with an article by KR Bolton entitled “The Great Conspiracy Against Russia: What is Really Behind the Campaign Against Putin”.

KR BOLTON is a Fellow of the Academy of Social and Political Research (Athens) and of the Institute for Higher Studies in Geopolitics and Auxiliary Sciences (Lisbon). He is a ‘contributing writer’ for Foreign Policy Journal, and a regular columnist for New Dawn, and The Great Indian Dream (Indian Institute of Planning & Management). He has been widely published in the scholarly and broader media. Books include: Revolution from Above (Arktos, London, 2011), Stalin: The Enduring Legacy (Black House Publishing, London, 2012), Artists of the Right (Counter Currents Publishing, San Francisco, 2012), The Parihaka Cult (Black House, 2012), Introduction to Oscar Wilde’s Soul of Man Under Socialism (Black House, 2012), The Psychotic Left: From Jacobin France to the Occupy Movement (Black House, 2013), Geopolitics of the Indo-Pacific (2013), Peron and Peronism (2013), Introduction to T E Lawrence’s Seven Pillars of Wisdom (2013).

The above article appeared in New Dawn Special Issue Vol 7 No 6.

Read this article with its illustrations by downloading
your copy of New Dawn Special Issue Vol 7 No 6 (PDF version) for only US$4.95