THE ROTHSCHILDS AND ROCKEFELLERS JOIN FORCES IN MULTI-BILLION DOLLAR DEAL 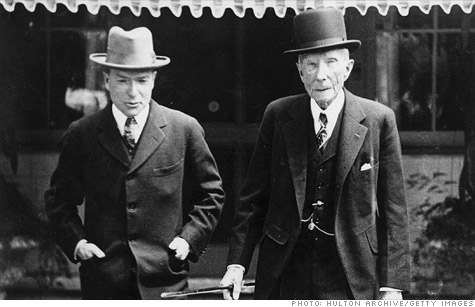 There is not enough money in the universe to be donated to the neediest of causes that will undo the horrendous crimes against humanity perpetrated by both of these families.

By VC
June 7th, 2012
If you needed proof the world elite is a tightly-knit group geared on dynasties and bloodlines, well here’s a pretty good one.
The most powerful family of Europe, the Rothschilds have joined forces with the most powerful family of America, the Rockefellers, in a super-multi-billion-dollar deal that greatly expands the influence of both families.
For centuries, the Rothschilds and the Rockefellers silently shaped the world as we know it, influencing political decisions, the economy and even wars between nations. As Mayer Amschel Rothschild stated:

“Give me control of a nation’s money and I care not who makes her laws.”

Both families are now major actors in the creation a New World Order and this deal is a great example of how these ancient dynasties are merging into a single, world-dominating unit. As David Rockefeller stated in his memoirs:

“Some even believe we are part of a secret cabal working against the best interests of the United States, characterizing my family and me as ‘internationalists’ and of conspiring with others around the world to build a more integrated global political and economic structure – one world, if you will. If that’s the charge, I stand guilty, and I am proud of it.”~ David Rockefeller, “Memoirs of David Rockefeller” p.405

Here’s an article on the mega-deal between the two most powerful families on Earth.
TRANSATLANTIC ALLIANCE BETWEEN ROTHSCHILDS AND ROCKEFELLERS
FOR WEALTH MANAGEMENT

As if they weren’t already well-connected enough, the world’s two greatest dynasties joined forces yesterday as Europe’s Rothschild banking clan bought a stake in the Rockefeller group’s wealth and asset management business to gain a foothold in the US.

The patriarchs of the two families ~ 96-year-old David Rockefeller and Jacob Rothschild, 76 ~ cemented a five-decade acquaintance as the younger man’s London-based £2bn RIT Capital investment trust bought a 37 per cent stake in the American’s business.
In addition to bringing together the two doyens, the deal will considerably expand the vast networks of both families.
To give a taste: Lord Rothschild’s son, Nat Rothschild, is a well-known entrepreneur with stakes in a range of companies such as Genel, the Kurdistan-focused oil producer run by former BP chief executive Tony Hayward and Bumi, the Indonesian mining group. He was also linked with George Osborne and Peter Mandelson at a notorious party on an oligarch’s yacht off Corfu in 2008.
Lord Rothschild’s niece Kate is married to Ben Goldsmith, brother of Conservative MP Zac Goldsmith and Jemima Khan and son of the late billionaire business tycoon Sir James Goldsmith.
On the Rockefeller side, for starters, David’s granddaughter Ariana is a successful fashion designer who married the construction heir Matthew Bucklin in 2010. And let’s not forget the founders who, although no longer with us, live on through their business creations.
The Rockefeller family’s journey to vast riches began in 1870 when John D Rockefeller set up Standard Oil and went on establish a fortune that is widely regarded to be the largest in US history. The family’s wealth management operation was set up in 1882 to manage that fortune.
The Rothschild dynasty goes back even further, to when Mayer Amschel Rothschild started a business in Frankfurt towards the end of the 18th century. It helped finance Britain’s war against Napoleon in the 19th century and raised funds for a loan allowing the British government to buy the Suez Canal.
The Rothschilds bought the stake in Rockefeller from French banking group Société Générale for an undisclosed sum. SocGen, which has owned the stake since 2008, appointed a new head of private banking in March, replacing Daniel Truchi with Jean-François Mazaud.
SocGen’s sale of the stake comes as banks around the world sell peripheral assets to reduce their risks and strengthen their capital bases in order to meet tough regulations aimed at preventing a repeat of the 2008 financial crisis.
Commenting on the deal, Mr. Rockefeller said:

“Lord Rothschild and I have known each other for five decades. The connection between our two families remains very strong. I am delighted to welcome Jacob and RIT as shareholders.” ~ The Independent

Here’s an article describing the long-standing ties between the Rothschilds and the Rockefellers.
ROTHSCHILD AND ROCKEFELLER: THEIR FAMILY FORTUNES

One: ensure your children feel a duty to preserve the family fortune.
And, two, paradoxical as it may sound: give as much money as you can to universities, galleries and hospitals. ~ The Telegraph