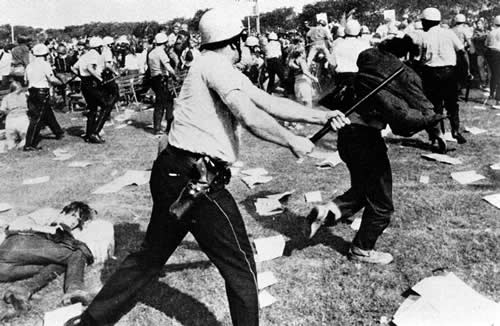 Chicago Riots 1968, 11 killed. Definitely experienced in criminal and brutal activity.
Dark Government
May 12, 2012
Tens of thousands of demonstrators will descend on Chicago, Illinois this month to protest the annual conference of NATO nations, and police are preparing with the help of one million dollars’ worth of weapons and riot gear.
Chicago’s law enforcement agencies have invested as much as $1 million on riot-control equipment, including at least one long-range acoustic
Demonstrators and organizers alike have both described the plans for marches and rallies against the NATO Summit later this month as being peaceful in nature. Law enforcement wants to make sure that they keep the events non-violent, though, and will aim to do so with a major new arsenal of riot gear.
The LRAD, a sound cannon-like device that has been linked to causing permanent hearing loss, is being touted by the Chicago Police Department as a necessity for public safety.

“This is simply a risk management tool, as the public will receive clear information regarding public safety messages and any orders provided by police,” Chicago police spokeswoman Melissa Stratton tells the Guardian, adding that it will be available “as a means to ensure a consistent message is delivered to large crowds that can be heard over ambient noise.”

Police officers are believed to have used LRADs the last time that several world leaders attended a major conference on American soil. Employing the machine against protesters during the 2009 meeting of the Group of 20 leaders in Pittsburgh, Pennsylvania was believed by The New York Times to be the first instance the device was deployed on demonstrators in America.
During that episode, police assaulted protesters by launching tear gas canisters and stun grenades into the crowd ~ but only after crippling them with the sound cannon, of course.
“This is a device that has the capability to inflict permanent hearing loss on people,” attorney Vic Walczak tells the Guardian. He represents Karen Piper, a university lecturer, who claims to have suffered irreversible hearing damage at the hands of a LRAD during the 2009 G20 protests. Walczak adds that the device is “more dangerous than a Taser” and that “It should not be used outside the battlefield.”
In recent months, the weapon has been reportedly dispatched with law enforcement agencies that have been deployed to monitor protests across the US waged in association with the Occupy Wall Street movement.
Several offshoots of OWS, along with the National Nurses United group and thousands of protesters outside of Chicago, are expected to converge on Chicago for the protests this month.
The Guardian reports that the main action is slated to occur on Sunday, May 20. To additionally ready law enforcement officers, the US Federal Protective Service drafted plans to send armed agents into downtown Chicago to patrol the city and prepare for protests as early as the first of the month.
Chicago’s mayor, former White House Chief of Staff Rahm Emanuel, told reporters that he was not made aware of that decision.
ED: And if you believe a word that creature utters, you are in for a great surprise, and not one that will put a smile on your face. A grimace ~ perhaps. A smile ~ never.
Emanuel was informed, however, that a planned protest scheduled to coincide with the conference ~ one that the city issued a permit to ~ may be larger than originally anticipated. As a result, Emanuel reportedly issued that the city revoke the permit, which had been authorized months earlier to National Nurses United.
Tom Morello, guitarist for Rage Against the Machine, tells Rolling Stone that he plans to participate in the protest, with or without the city’s authorization.
“Chicago is my hometown and the mayor is making me feel mighty unwelcome,” Morello says to the music magazine. “I don’t care what they say or do, I’m coming to rock out and speak my mind.”
Similar Posts:
Red Cross Told To Prepare Evacuation During NATO Summit in Chicago
Acoustic Device Deployed in Chicago