Reptilian Revelations Out of Africa 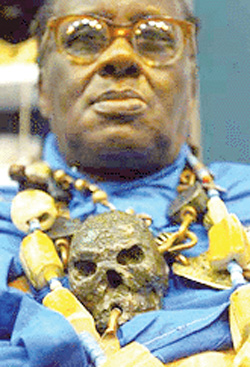 South Africa-based Zulu shaman Credo Mutwa confirms the story of reptilian-extraterrestrials in Africa, another hidden chapter of the lost history of Planet Earth. Having traveled throughout the world, Credo Mutwa, says that the “legends” of the interactions of humans and reptilians are common knowledge in Australia among the Aborigines, the cultures of Japan and Taiwan, as well as indigenous Native American people like the Mayans, Sioux, Cree, and many others. The Hopis’ Kachina, for example, reflects their understanding of the extraterrestrials’ presence on earth. Now it seems that only so-called Western civilisation authorities officially deny the existence of these creatures.

In an interview with Rick Martin, Credo Mutwa explains the manipulation of life on earth by these negative entities, “Our people believe that we, the people of this Earth, are not masters of our own lives, although we are made to think that we are.” Referring to the reptilian race, he says they are called “Chitauri” which means “the dictators” and “‘the ones who tell us the law.’ In other words, they who tell us secretly what we are to do.”

The intergalactic con for Earth-based humanity began with the arrival of the reptilians, who wasted no time in setting themselves up as “gods” and “overseers” to the humans living on the planet. Credo Mutwa says that “when the Chitauri came to Earth, they arrived in terrible vessels which flew through the air, vessels shaped like great bowls, which made a terrible noise and a terrible fire in the sky. The Chitauri told human beings, whom they gathered together by force with whips of lightning, that they were great gods from the sky and that from now on they would receive a number of great gifts from the gods.” Of course, there would be hell to pay, so to speak, for these alleged “gifts.” Was the gift of “religion” one of them?

This then is the essence of history disguised as mythology – or science fiction. “These so-called gods were like human beings, but very tall, with a long tail, and with terrible burning eyes,” Credo Mutwa continues, describing the real-life version of a prototypical horror movie. “Some of them had two eyes, yellow, bright eyes; some had three eyes, the red, round eye being in the centre of their forehead.”

The Zulu shaman then expresses surprise, when he describes the Darth Maul character in the Star Wars movie which shows “a character exactly like a Chitauri…with horns all around its head.”

Credo Mutwa’s insights into human-reptilian interactions are credible because they explain the otherwise unexplainable behaviour of warmongers, politicians, corporate chiefs and others who are “placeholders” in the Illuminati control system on Earth. “One other thing that our people say is that the Chitauri prey upon us like vultures. They raise some of us. They fill some of us with great anger and great ambition. And they make these people they’ve raised into great warriors who make terrible war. But, in the end, the Chitauri do not allow these great leaders, these great war chiefs and kings, to die peacefully. The warrior chief is used to make as much war as possible, to kill as many of his people and those he calls enemies, and then, in the end, the warrior chief dies a terrible death, with his blood being spilled by others.”

Explaining why the spiritual evolution of humanity has been stifled, Credo Mutwa continues, “These creatures then took away the great powers that human beings had: the power of speaking through the mind only, the power of moving objects with their mind only, the power of seeing into the future and into their past, and the power to travel, spiritually, to different worlds… There are such creatures, and the sooner skeptics amongst us face up to this fact, the better it shall be. Why is humankind not progressing? Why are we running around in a great circle of self-destruction and mutual-destruction?”

Despite the harsh realities he describes, Credo Mutwa ends his interview on a positive note. He says, “There is hope! First of all, there is a God above us. And this God is more real than most of us believe. God is not a figment of someone’s imagination. God is not something dreamt-up by old men and old women in prehistoric times. God exists. But standing between us and God are creatures who claim to be gods. And these creatures we must get rid of in order to get closer to God.”

Interview with Credo Mutwa by David Icke on the Reptilian Agenda, www.youtube.com/watch?v=oh6MhHc8JQk

Writer and Artist URI DOWBENKO is the author of Bushwhacked: Inside Stories of True Conspiracy and Hoodwinked: Watching Movies with Eyes Wide Open. He is also the founder and publisher of www.ConspiracyPlanet.com, www.ConspiracyDigest.com, www.AlMartinRaw.com, and www.InsiderIntelligence.com, as well as the publisher of The Conspirators: Secrets of an Iran Contra Insider by Al Martin. You can visit Uri at www.UriDowbenko.com and www.NewImprovedArt.com.

The above article appeared in New Dawn Special Issue 7.

Read this article and all its illustrations by downloading
your copy of New Dawn Special Issue 7 (PDF version) for US$5.95