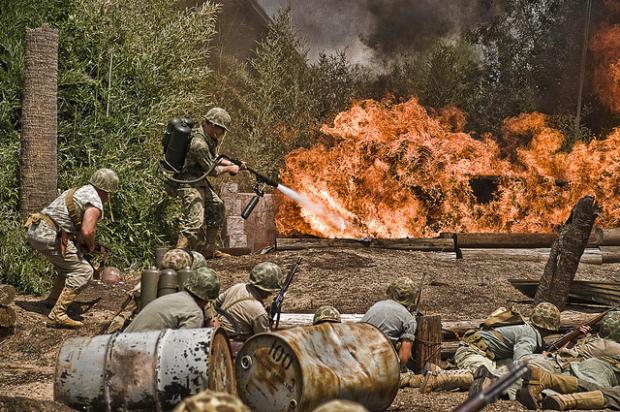 “The authorities in Kiev not only bear direct responsibility, but are complicit in these criminal activities. Their arms are up to the elbows in blood.”

Odessa reflects “the connivance of those who consider themselves the authority in Kiev.”

“They allowed extremists and radicals to burn unarmed people alive. I stress that these people were unarmed.”

“The people who justify this punitive operation are the same ones that did not allow the legitimate President of Ukraine, Viktor Yanukovich, to bring order to the country.”

“In spite of consistent attempts to encourage dialogue, Russia has hit against provocation not only from Kiev, but also its Western sponsors.”

EU foreign policy chief Catherine Ashton was no better. “(T)he state’s monopoly on the legitimate use of violence needs to be respected,” she said.

Peskov called her comment “monstrous,” adding: “Our colleagues in the West are basically trying to justify the large numbers of murders we are seeing.”

Moscow got thousands of Eastern Ukrainian calls for help, he said. “Desperate people call. They ask for help.”

“The vast majority want Russia’s help. All these calls are reported to President Vladimir Putin.”

Journalist Graham Phillips said all roads “in and out of Kramatorsk (are) blocked off.”

“We are not going to stop,” he added. A Donbas self-defense forces statement said:

“The security operation in Kramatorsk has resumed, snipers controlled by the Kiev government have occupied multi-story buildings and are firing from there.”

“In addition, there is fighting on the town streets, involving the use of various weapons.”

Casualties “are mainly civilians, who happened to be near the scene of fighting.”

“(F)ull mobilization (was) declared. Our security services are ready for full-scale military actions.”

“We will mobilize our people today in the united people’s struggle resistance movement…” It’s an ongoing struggle for freedom, he added.

Lights were turned off. “Shots (were) heard across the city. Signal rockets (lit) up the sky…Peoples (said) the Ukrainian army is shooting at everything that moves right now.”

Unarmed civilians are fair game. They’re being killed and injured in cold blood. Fighting shows no signs of abating.

Media scoundrels turned truth on its head. They ignored Kiev’s responsibility for dozens of deaths and injuries.

“Violence also erupted Friday in the previously calmer port city of Odessa, on the Black Sea, where dozens of people died in a fire related to clashes that broke out between protesters holding a march for Ukrainian unity and pro-Russian activists.”

Nothing about Kiev putschists responsibility. Nothing about Washington ordering them to unleash violence against Eastern Ukrainian activists.

The Washington Post was no better. It turned truth on its head, saying:

On Friday, “Ukraine suffered its bloodiest day in nearly three months…when the army launched its first major assault on a rebel stronghold and 34 killed in clashes between pro-Ukrainian and pro-Russian mobs in the Black Sea port city of Odessa.”

“A pro-Ukrainian rally attended by thousands of soccer fans before a game Friday night was attacked by pro-Russian separatists.”

“The battle for Ukraine is entering a dangerous new phase, as the Kiev government is finally making an attempt to regain control over its eastern cities from local thugs and Russian special forces.”

“Is it too much to ask the US to offer the military means to help Ukraine keeps its own territory?”

He wants to “disrupt his neighbor,” they said. He’s doing it as May 25 elections approached, they added.

They’ll be farcical when held. They’ll have no legitimacy whatever.

“The Russian strongman wants to block the vote, or disrupt it enough so he can call it illegitimate,” said Journal editors.

They ignored Odessa’s massacre. They turned a blind eye to Right Sector thugs shooting unarmed civilians in the back of the head.

They’re mindless of fascism’s dark side. They expressed full support.

“Moscow could be planning to repeat its ‘annexation’ of Crimea in other parts of Ukraine,” it added.

It turned truth on its head saying so. Tribune readers have no idea what’s going on.

Nor do US TV viewers. Their Ukrainian coverage blames victims for Kiev crimes.

They’ve done so throughout months of conflict. They support right over wrong.

They’re propagandists. They masquerade as journalists. They turn truth on its head. They systematically lie to readers and views.

They endorse what demands condemnation. They do it 24/7 round-the clock.

The battle for Ukraine’s soul continues. No end of conflict looms. Expect worse than ever ahead.

Bloodbath in a dozen or more cities could follow. Don’t expect media scoundrels to explain accurately.