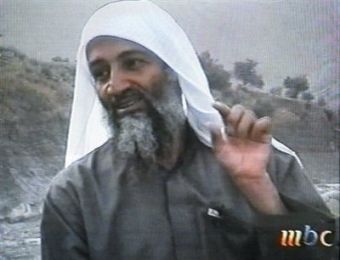 By Nashid Abdul-Khaaliq
ATT
May 2, 2011
The information put out by the White House about the killing of Osama Bin Laden is a DELIBERATE LIE! OSAMA BIN LADEN HAS BEEN DEAD SINCE 2001!!!
As shown below by reports from Taliban fighters, Osama Bin Laden’s family, Heads of State, the CIA, Pakistani Intelligence, Israeli Press, NY Times, and other sources, Osama Bin Laden died of natural causes in Tora Bora in December, 2001.
Why the hoax about his death at this time?
It is because the US doesn’t need the Bin Laden, Al-Qaeda boogeyman to justify attacking Muslim nations anymore. The Al-Qaeda boogeyman was used successfully to attack Iraq, Afghanistan, Yemen, Somalia, Pakistan and other places.
But as evidenced in Libya, all that needs to be done now is claim that leaders are killing their people and the US and NATO will have all the justification they need to attack other sovereign nations.
We are led to believe that the same murderers of millions of Muslims, plunderers of their lands and haters of Islam have transformed themselves into the saviors of the Muslim masses.
We should not be fooled by their appealing propaganda playing on the goodness of our hearts. Their goals are always the same ~ steal Muslim countries resources and gain world dominance for Israel’s benefit.
They see how easy it is to provoke protests in Arab countries, send their mercenaries in to kill the people, blame the killings on Arab leaders and then bomb those countries. They are very selective about this process choosing to execute the complete process in Libya and now itching to do it in Syria on their road to waging war on Iran.
Their aim is to weaken and decimate Muslim countries whether friend or foe. Tunisia and Egypt were friendly countries whose cruel, corrupt and self serving leaders did more to please the West than to satisfy the needs of their people.
Libya and Syria are not considered friendly countries by the West in the same light as Egypt and Tunisia. Yet friend or foe, both types of leadership has to be toppled because the aim is to leave the Muslim world weak and helpless subject to the dominion of the West. Iraq and Afghanistan are good examples of what they want for the Muslim world after their escapades of bringing “freedom” to the Muslim masses. That “freedom” has only left those countries ruined and destroyed in much worse shape than they were in before their “saviors” from the West invaded.
Michael Rivero of whatreallyhappened.comhad his website hacked right before Obama was about to make the announcement about Osama Bin Laden being killed. Why hack his website at this time? Michael gave this response:

Yes, we were hacked. Starting just moments before President Obama announced the death of Osama bin Laden, our website was hit with what the hosting company described as a massive distributed denial of service attack, no doubt to prevent the public from accessing the documentation showing Bin Laden actually died in December of 2001 of natural causes. My concern here is that the US or Israel will now stage a false flag attack on the US, claim it is “revenge” by “Al Qaeda”, and use it to justify total war on all Arab/Muslim nations. The US may start WW3 just because they cannot think of anything better to do!

Besides the reasons given above for announcing that Osama Bin Laden has been killed at this time, there are many others including increasing Obama’s chances for re-election to make him look like a hero for killing the world’s most wanted “terrorist” during his presidency.
It also puts him in a great position to have the whole country unified behind him around the issue of “bringing the 9/11 killers to justice”. It also promotes the exposed myth about the false flag 9/11 event being done by Muslims and keeps that fresh on the minds of Americans. The news media is doing non-stop propaganda, pulling out all the stops to broadcast this event in the most excellent manner. Even searches in Google to get information about Osama dying in 2001 is drowned out by a proliferation of hits dealing with him being killed in 2011.
Pakistan is also in the cross hairs of the US for “harboring” Osama Bin Laden. The US is ramping up for another full scale war on Pakistan using OBL amongst other reasons for justification. They want to invade Pakistan to clean up the “terrorists”.
Please check out the information below showing proof of Osama Bin Laden’s death in 2001. Make sure to go to the links listed for further verification. After claiming that they have Osama Bin Laden’s body and taking DNA tests, the media is now reporting that Osama Bin Laden has been buried at sea.
How convenient!!!
Well I guess we have no way now of verifying if their claims were true. I think more likely it would have been verifying how false their claim was if anything.
As dumb goyim we have to blindly believe our media and government! With Osama Bin Laden’s body buried somewhere under the sea we have no way of ascertaining the truth. Their claim in burying Osama so fast is to fulfill the requirements of a Muslim burial as if they respected him so much or the crimes that they associated with Osama had anything to do with Islam. But what Muslim burial tradition were they following?
EVIDENCE BIN LADEN IS DEAD
Translation of Funeral Article in Egyptian News Paper al-Wafd, Wednesday, December 26, 2001 Vol 15 No 4633 Reporting News of Bin Laden’s Death and Funeral 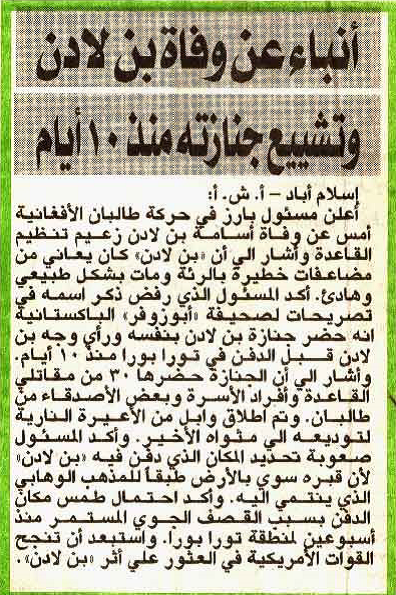 A prominent official in the Afghan Taliban movement announced yesterday the death of Osama bin Laden, the chief of al-Qaeda organization, stating that bin Laden suffered serious complications in the lungs and died a natural and quiet death.

The official, who asked to remain anonymous, stated to The Observer of Pakistan that he had himself attended the funeral of bin Laden and saw his face prior to burial in ToraBora 10 days ago.

He mentioned that 30 of al-Qaeda fighters attended the burial as well as members of his family and some friends from the Taliban.

In the farewell ceremony to his final rest guns were fired in the air.

The official stated that it is difficult to pinpoint the burial location of bin Laden because according to the Wahhabi tradition no mark is left by the grave.

He stressed that it is unlikely that the American forces would ever uncover any traces of bin Laden. 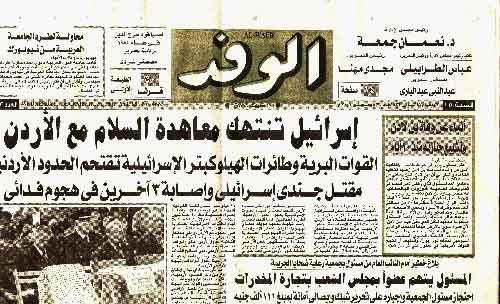 2001 Osama Bin Laden spent time in American hospitals, Untill his death in mid-December
The Truth About Osama Bin Laden
Israeli Intelligence: he died and
all new videos are faked
http://www.welfarestate.com/binladen/funeral/israel-intel.txt

Doctor says he is extremely ill requiring dialysis
http://www.welfarestate.com/binladen/funeral/laden-dialysis.txt
New York Times Article Reporting Osama Bin Laden dead
http://www.nytimes.com/2002/07/11/opinion/11TAHE.html?ex=1089432000&en=373a282aeff2716a&ei=5070&todaysheadlines
Bin Laden’s voice was detected regularly until two weeks ago by intelligence operatives monitoring radio transmissions in Tora Bora, according to the Pentagon. Telegraph, 12/28/2001
Osama bin Laden has died a peaceful death due to an untreated lung complication, the Pakistan Observer reported, citing a Taliban leader who allegedly attended the funeral of the Al Qaeda leader. “The Coalition troops are engaged in a mad search operation but they would never be able to fulfill their cherished goal of getting Osama alive or dead,” the source said. http://www.foxnews.com/story/0,2933,41576,00.html
A prominent official in the Afghan Taliban movement announced yesterday the death of Osama bin Laden, the chief of al-Qaeda organization, stating that bin Laden suffered serious complications in the lungs and died a natural and quiet death.
http://www.telegraph.co.uk/news/worldnews/asia/afghanistan/1366508/US-casts-doubt-on-bin-Ladens-latest-message.html
Along with the above, there is much, much more evidence. Some people believe that even Benazir Bhutto, former Pakistani Prime Minister, was killed because she also revealed the truth about Osama Bin Laden being murdered in 2001. Think for yourself people. Don’t believe these media lies. At the very least try to ascertain the truth before you judge.
CNN reported 2/1/02 bin Laden aged enormously
Doctor says he is extremely ill requiring dialysis
October Surprise 2004: From left handed to right handed? The new tape is fake!
November 2002: Lab confirms voice tapes are fake
September 2002: More bin Laden videos, but voice only?
March 2002: bin Laden sends an email from his AOL?
May 2002: Old bin Laden tapes, sent as new tapes
June 2002: Promises of new tapes, which the U.S. media may “choose” not to air.
Who were the terrorists REALLY working for?