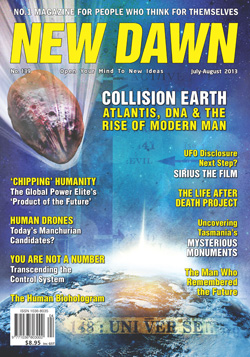 The Global Power Elite’s ‘Product of the Future’. Adrian Salbuchi exposes new microchip technologies and the ramifications for personal freedom.

Take Your Life Off Autopilot. Nick Parkins reveals how our subconscious mind plays a much more important and powerful role in our life than we realise.

You Are Not A Number

Transcending the Control System. Neil Kramer explains if you are not shaping your own reality, then someone else is doing it for you.

Sirius the Film: Disclosure’s Next Step?

Marc Star takes a look at the new documentary film that blows the lid on the ET and free energy cover-up, and a mysterious humanoid of unknown origin.

Robin Kelly, M.D. outlines the revolutionary paradigm-shattering breakthroughs being made in the fields of holographic science, fractals and quantum biology.

The Life After Death Project: Interview with Paul Davids

Hollywood director Paul Davids speaks to New Dawn about his new documentary film and the incredible incident which convinced him there’s an afterlife.

A Life of Philip K. Dick

The Man Who Remembered the Future. Anthony Peake discusses the central role played by precognition in the life of one of science fiction’s greatest writers.

The Real Reason Microwaved Food is Harmful
By Mike Adams

The Reconciliation of Dualities
By Tiamara

The Path to Psychic Development
By Douglas James Cottrell, Ph.D.

Download your digital copy of this 80 page full colour magazine
(iPad compatible e-book)
for only US$5.95