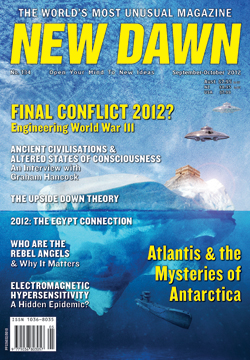 Adrian Salbuchi connects the dots of a long term plan that could take us down the road to World War III.

Atlantis, Nazis & Ancient Cataclysms. Len Kasten examines legends of Nazi bases and an ancient city under the ice on the vast southern continent.

South to North Migration: The Upside Down Theory

Rand & Rose Flem Ath present compelling evidence for human migration to America coming from the far south – and the connection to Antarctica & Atlantis.

Scholar & author Dr. Robert Schoch discusses the Mayan calendar end date and the possibilty of discovering the fabled Hall of Records under the Sphinx.

Who are the Rebel Angels & Why It Matters

Are angels and demons real? Timothy Wyllie uncovers the secret history of an angelic rebellion and its impact on Earth.

Embracing the Winds of Change

Intuitive and mystic Christine Page shares her insights on the importance of 2012 and beyond, and the vast potential for spiritual transformation.

Dr. Richard Spence investigates the intriguing and enigmatic figure of Basil Zaharoff, known to many as the Merchant of Death.

Finding My “Self”
By Gwen Jones