MALI: A SCRAMBLE FOR POWER 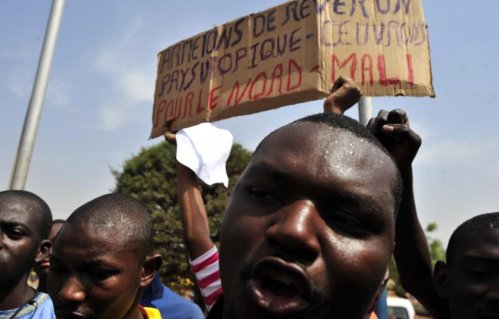 Within the span of two weeks Mali experienced a military coupfollowed by a declaration of independence by the Tuareg in the north, leavingregional and international powers divided over who to support.
Tuareg revolutionaries claimed they had complete control ofnorth Mali from Kidal to Gao last week, including the capital of theirhistorical homeland Azawad and Timbuktu.
The general secretary of the National Movement for the Liberationof Azawad (MNLA), Bilal Ag Acherif, announced the creation of the “independentstate of Azawad” yesterday.
The president of its politburo Mahmoud Ag Ali spoke to Al-Akhbar after they hadcaptured the lands populated by a majority of Tuareg and Arabs in the north onThursday.
He said that “the announcement of the independent state ofAzawad is ready. Its capital will be the historical city of Timbuktu thatcelebrated its third millennium two years ago.”
He added that “the Tuareg revolutionaries will put an end tomilitary operations after the liberation of the north is complete.” They willthen focus on “establishing and building the state.”
He refuted claims in the Western media that the Tuareg rebelsintend to continue their military campaign, in conjunction with the Saharabranch of Al-Qaeda in the Islamic West, until the fall of the capital Bamako. 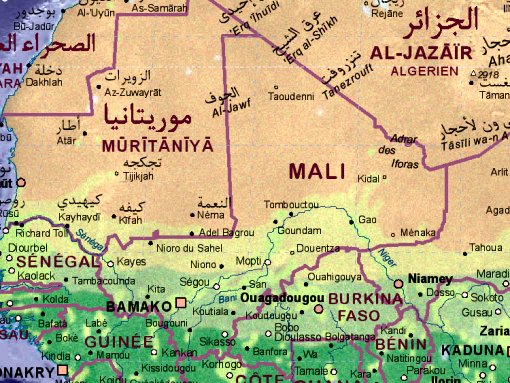 The independence announcement surprised many observers andbecame an obvious embarrassment to international and regional powers.
The governments of West Africa are still trying to decide how todeal with the military junta in the country that toppled the country’spresident in March.
Should the military rebels be pressured to return to theirbarracks and hand over power to the “legitimate” government, or should they begiven more time and indirect support in order to recapture the areas held bythe Tuareg revolutionaries?
On the surface there seems to be a consensus among the“international community” to reject the announcement of Azawad independence.
The US, for example, has already announced its categoricalrejection of the separatists’ demands.
The French Foreign Minister Alain Juppe said that thedeclaration of independence is “null and of no value.”
For her part, EU High Representative of the Union for ForeignAffairs and Security Policy Catherine Ashton said that “the EU has made clearthroughout the crisis that it respects the territorial integrity of Mali.”
African Union President Jean Ping expressed the bloc’s “totalrejection” of the Tuareg declaration of a homeland in the north and condemnedthis announcement in a statement saying it was “null and of no valuewhatsoever.”
Nevertheless, negotiations between African and Western diplomatsare heating up.
On one side of the debate over how to deal with the situation inMali there is the majority of West African countries, in addition to Algeria,Niger, and Cote d’Ivoire, who are supported by the US. They favor the newregime in Mali, hoping that it can put an end to the Tuareg secession.
They want the new junta to sign on a “declaration of principles”for a return to constitutional legitimacy and hand power back to a civiliangovernment immediately. At the same time, they want to negotiate with Tuaregactivists to form a national unity government and give the north extensiveautonomy.
On the other side, there are those who call for supporting theTuareg separatists, on the condition that they commit to fighting Al-Qaeda andexpel the militant Islamist group from territories under MNLA control.
They include Morocco, Nigeria, Senegal, and Burkina Faso and aresupported by a strong current in the French foreign ministry.
“Dealing with the current situation cannot only be through goodintentions and a declaration of principles,” a French diplomat in Paris told Al-Akhbar on Friday.
“Until now, all Western and regional efforts have failed againstAl-Qaeda’s activities on the African coast, although they only have 500 armedmen,” he said.
The French diplomat also explained that “for years, Tuaregactivists have been expressing opinions…they are the only power that can expelAl-Qaeda from their lands if they are given the necessary political andmilitary support…But this option was always rejected by the regional powers,who fear that the Tuareg will exploit such support to arm themselves and callfor an independent state.”
He added that, “after the declaration of independence, regionaland international powers have two choices.
They can support the independence ofAzawad on the condition that the Tuareg fight and expel Al-Qaeda or they canstand against the independent state…The second choice will push the Tuaregactivists to ally themselves with Al-Qaeda against foreign intervention.”
Western powers fear that any reconsideration of bordersinherited from colonialism could set a precedent that would launch an “AfricanSpring” of secessionist movements in neighboring countries such as Libya,Niger, Algeria, and others.