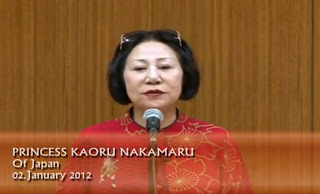 Japanese Princess Kaoru Nakamaru speaks in the following video about 2012 and what is going to happen on Earth after the coming winter solstice on Dec 21st. She speaks about how Earth will pass into the 5th dimension, however before that there would be 3 days and 3 nights of complete darkness as we pass through a pass she calls ‘Nuru’. She has been in telepathic contact with ETs and UFOs ever since her third eye was awakened and she is beginning to remember her some of her past lives on different planets. Quite an interesting video concerning 2012 … a must see !

The Princess’ views on the shift are quite congruent with what Dolores Cannon has been saying about the coming 5D earth, how we must increase our vibrational state of we want to get there … and how the ones who remain trapped in fear will find themselves in a similar reality surrounded by negativity as that is what they would’ve created for themselves based on the choices they’ve made.