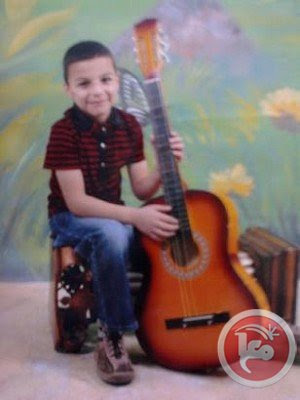 No one, including the soldiers involved in this ridiculous situation, can possibly believe that such young children as mentioned below, are terrorists. However, the name of the game is power and the installation of  it into the deepest corners of the Palestinian mind. The trauma to both parents and child are important factors.

Mo’menShtayeh probably owns a John Cena shirt, the WWE wrestler who the Palestiniankids hero worship, their shrill voices echoing in neighborhood streets ofCena’s catchphrase, “You can’t see me!” accompanied with waving a hand in frontof their faces.

Mo’men Shtayeh has seen and knowstoo much. There is a chance ~ nay, a probability ~ that due to witnessing theIsraeli army’s brutality and severe oppression in his village of Kufr Qaddoum,Mo’men might have grown up to be a warmongering Islamist (or perversely, a TeaParty-er).
Mo’men Shtayeh represents a threatto the security of the Israeli racist occupying state. Apparently, it is wellknown that due to his savvy nature, Mo’men has been involved in drawing upspecialized blue prints to attack enemy bases.
So it all makes perfect sense thatthe most moral army in the world, the Israeli Defense Forces, the 4th strongestarmy, the upholders of the beacon of democracy and godly light, tried to arrestMo’men on Monday, April 2nd.
The thing is, Mo’men is 2 and a halfyears old.
Murad Shtayeh, the coordinator ofthe popular resistance committee in Kufr Qaddoum and the father of littleMo’men, told the Electronic Intifada that heavily armed Israeli soldiers raidedhis house on Monday at 5:30pm. Two soldiers remained outside, two others wentin the house, shouting they were going to arrest Mo’men.
“Mo’men was going inside the house,”Murad said, “when the soldiers suddenly took off from where they had been standing.They came running to the house like they were in a marathon, very fast and urgent,like a bunch of crazies.”
The soldiers claimed that Mo’menhad, not a nuclear warhead, or a sub-machine gun, but the most dangerous item inthe world ~ a slingshot.
“Of course Mo’men didn’t have aslingshot in his hands!” scoffed Murad. “And even if he did, so what? He’s akid.” For crying out loud.
The soldiers were adamant thatMo’men hand over his slingshot (which he doesn’t own) because he was using itto aim at the soldiers. What’s more, they wanted Mo’men to hand himself over tothem too.
Bashar Shtayeh, Murad’s cousin wasalso present at the scene. “The soldiers in the house drew their weapons andpointed them at the family,” he said, “threatening them that they would notleave unless Mo’men was handed over to them.”
A loud angry argument persisted forhalf an hour between Murad, other villagers who had come to see what thecommotion was all about, and the soldiers. The soldiers then left, havingcemented yet another moral meltdown in the occupation’s history. Not that theyhad morals in the first place.
But what of the toddler?
Needless to say, Mo’men wasterrified by the on goings around him.
“What can I say, of course he’saffected by this,” Murad said. “He was very scared. He’s doing slightly betternow.”
Kufr Qaddoum began its weeklypopular resistance protests in June 2011, against the encroaching illegalsettlement of Qedumim that is built on the village’s land and to open the mainvillage road that leads directly to Nablus.
The Israeli oppression against KufrQaddoum doesn’t just happen on Fridays. It occurs on a daily basis.
“Obviously, they thought this stunt-whether carried through or not~ would serve as a punishment for us, but thetruth is that it will not deter us from our protests” Murad declared.
“Every day and night we have 5 to 7 soldiersin the village harassing us. Sometimes they come in with their dogs and fetchcars and houses. Yesterday (Tuesday) at 9:30pm the soldiers set up a checkpointon one of the inner streets of the village.”
Mo’men Shtayeh, your little 2 and ahalf year old self highlighted the absurdity, the idiocy, the shameful natureof the Israeli occupying army. May the force of John Cena be with you.

Occupied Palestine
Israel’smayhem against children is getting beyond every imagination. On Jan 3, threeyoung children were arrested. The youngest was only 6 years old: Mohammed AliDirbas who was kidnapped from the street while going to the grocery store.After that Israel detained and interrogated little Mohammed for 4 hours.
The arrest and violations of law regarding interrogation of a 6year old really are the limit.
At the moment over 160 children already are illegally detained,arbitrary and in violation with literally all International Laws, arrested,kidnapped, interrogated while  military orders, higher laws or regulationsare being ignored, children are tortured, and neglected – when ill- even todeath and traumatized for life while the International community lackscondemnation but above all: actions.
Thispage will be daily and continuously updated with arrests of children if theyoccur and we want to ask all to help raise the awareness by sharing (and keepsharing this post), reblog it on your own weblog, website or refer or link toit. Feel free to copy any content necessary.
In 2011 the youngest child arrested was only5 years old
Below the list of arrests, resource, relatedinformation, reports of human rights organisations, legal context or documentswill be continuously updated.
CHILDREN ARRESTED AS FROM JAN 1, 2012
(*)  Media nor IOF does not release or reveal allnames/ages of detainees. For this reason some resources to individual arrestswith names and description of the kidnap/arrest may not be covered by mediaitself at all. The report includes all known cases by Palestinian Researchersinto prisoner affairs. In a special topic about Israeli violence against children youcan get an impression of the violence, abuse, torture and even death to whichPalestinian children are exposed due to Israeli violations and disrespect ofInternational Laws and every moral sense possible.
Due to immense increase of the violence, the post only mentionsincidents until May 2011, the following confirmed and documented cases can befound Category Children
VIOLENCEDURING INTERROGATION OF CHILDREN
Israel interrogates Palestinianminor ~ Palestine Telegraph ~ Jan 19, 2012
VIOLENCE AGAINST CHILDREN
OBSTRUCTION OF MEDICAL AID KILLSCHILDREN
Children of Palestine are not only threatened by arrests, just afew days ago a 7 month old baby diedbecause Israel obstructed the permit for live saving surgery and the childdied. Seven-month-old Adham Baroud died at the Al Rantissi Children’sHospital’s in Gaza City at around 1am on 26 December. He had been referred toIsrael for emergency treatment by his doctors in Gaza on 1 December.
Aside from 173 other children who died due to the sameobstruction of medical care. ~ Report
35 babies died, due to obstruction of medical care or accessrestriction at checkpoints ~ Report
The chance of being born for Palestinians in Israel knows a deathratio of 14/1000 against 3/1000 live births due to racist policies of Israel.Many services to which Israel according to International Law, Art.55 & 56of the Fourth Geneva convention is obliged are neglected causing shocking healthrisks for people, children and thus an unacceptable death rate ~ Report
CHILDPRISONERS
Over 160 children are still detainedillegally and in violation with law, arbitrary or trailed by military courts.They are not exempted from torture
Palestinian Children Detained Oppressively in Isolation ~ Report by Stephen Lendman ~ Jan5, 2012
Stone Cold Justice ~ Israel’s Detention & Torture ofChildren ~ Report
Israel Torture Palestinian Children by Electric-Shocking ~ Report
Abusing Palestinian Children ~ Report
B’Tselem: Jerusalemite children tortured by Israeliinterrogators ~ B’Tselem ~ Report
More about Israeli Torture
ATTACKSON CHILDREN
Aside from daily arrests of children in the West Bank, manychildren in Gaza encounter targeting by snipers and get shot or wounded,handicapped and in many cases killed. Even while sleeping in their beds in themiddle at the night, attacks by arrests are mainly undertaken by night, andaggressive violent attacks like bombings on Gaza also. Children do get killedwhile asleep while you turn side in your bed being unaware.
KIDNAPPING& ARRESTS OF CHILDREN:
Especially in Jerusalem many children are kidnapped. By thepolice, army, settlers and as is showed in a hidden camera captured video youcan witness a child abduction of a soccer playing child at broad daylight inJerusalem by undercover Israeli forces.
7,000 is the estimated number of Palestinian children detainedand prosecuted in Israeli military courts since 2000, shows a report by Defencefor Children International Palestine (DCIP)

87% ~ Children subjected to some form of physicalviolence while in custody.
91% ~  Believed to be blindfolded at some pointduring their detention.
12 % ~ The minimum age of criminal responsibility, as stipulated in the MilitaryOrder 1651.
62% ~ The percentage of children arrested between 12am and 5am.

Israel’s continuous arrest campaign of Palestinian youth andchildren of Silwan has intensified in recent weeks, with no place or activityseemingly safe for minors from Israeli authorities. Arrests have occurred aschildren return from school, drink coffee on the balcony of their family homeor buy vegetables in the street. Many minor arrests in recent days have taken placeduring quiet periods in Silwan, entirely unprovoked.

The campaign highlights Israeli authorities’ willingness to defy basicstandards of conduct and treatment, such as targeting and criminalization ofminors. Humiliation and physical assault are reportedly commonplace ininterrogation and detention, even for minors.
7 children numbered amongst 8 arrested by Israeli forces in Silwan today. Onechild arrested, Yahya al-Rishaq, is not even 6 years of age. Despiteal-Rishaq’s attempts to persuade soldiers not to take his young son, Israeliforces insisted on his arrest.
Three minors were abducted by undercover units, one aged 17 and the others 15.Bilal Osama Natshe (15), Maher Naim (17) and Ahmed Awad al-Bakri (15) weretaken whilst outside their homes in Alabasya district, bereft of anyinvolvement in clashes or confrontation.
Another minor, 15-year old Saleh Shweiki was summoned to interrogation whenpolice called his father at their Bir Ayyub home. Shweiki was detained onarrival on charges of participation in neighborhood clashes.
Shaher Zaidani, meanwhile, was arrested while on his way to work from his homein Al-Bustan district. Zaidani was seized while waiting for the bus, imprisonedand reportedly beaten in custody by Israeli forces.
Mahmoud Mohammed Abu Khater, 14, and another unidentified child were abductedby undercover forces while sitting outside their homes in Athury neighborhood.Khater is due to appear before the Magistrates Court tomorrow morning onfabricated charges.
The targeting of minors has left Silwan families frightened for their childrenand ever-more cynical of Israeli forces’ largely unfounded allegations againstyoung members of their community. 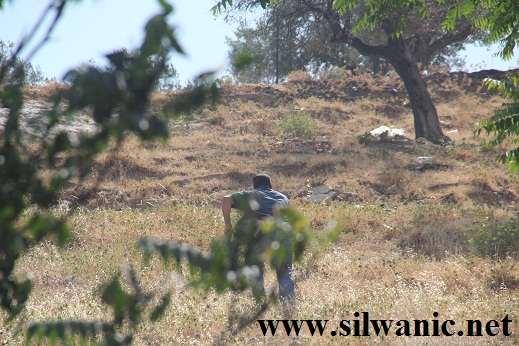 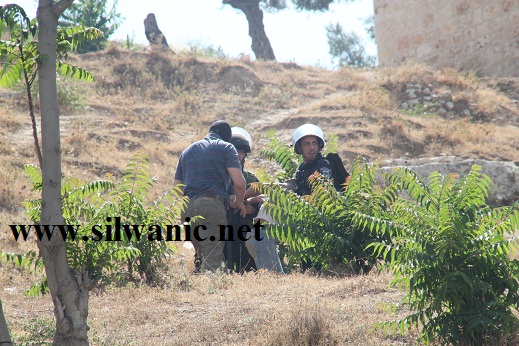 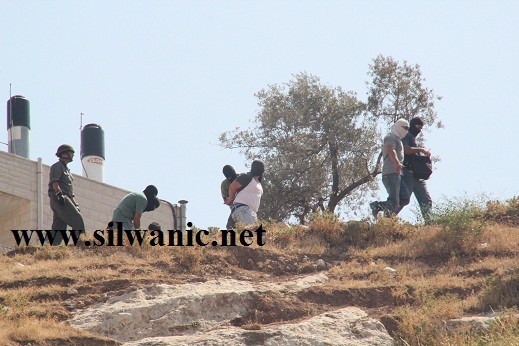 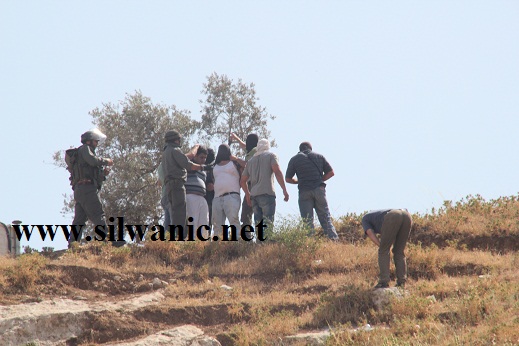 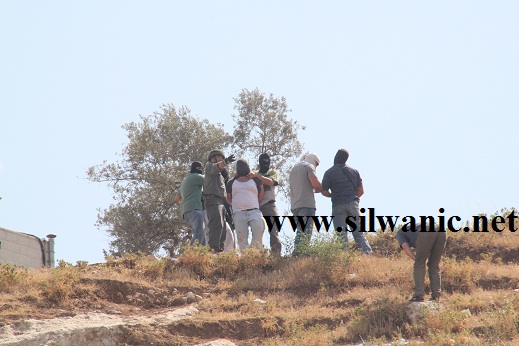 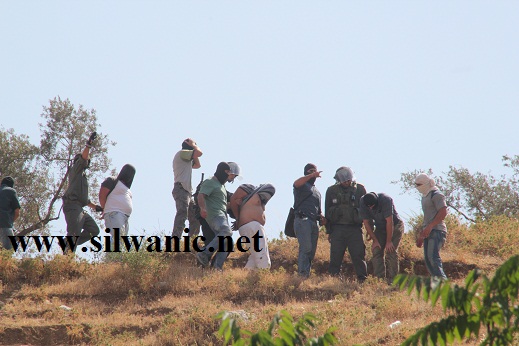 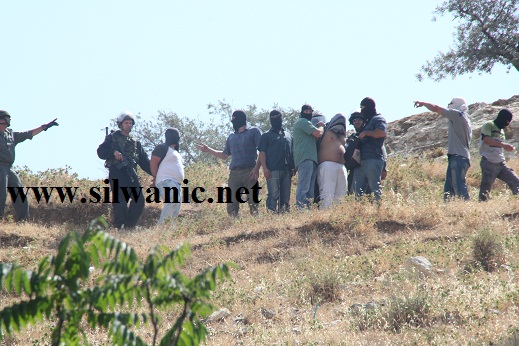 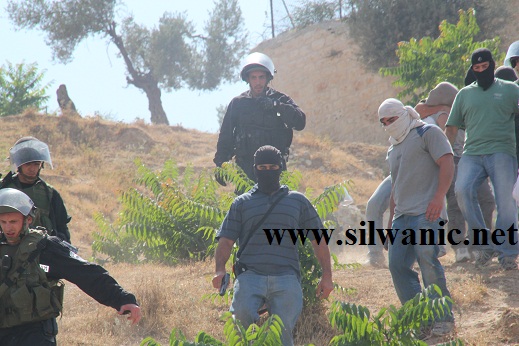 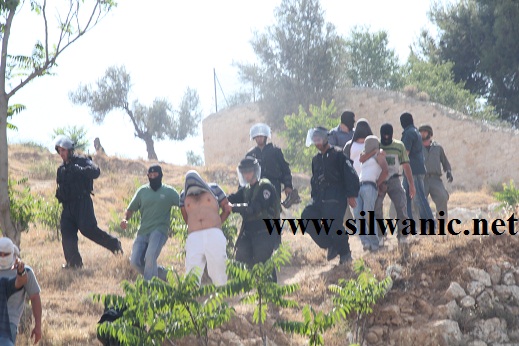 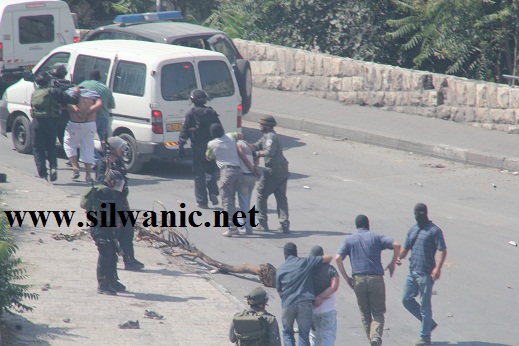 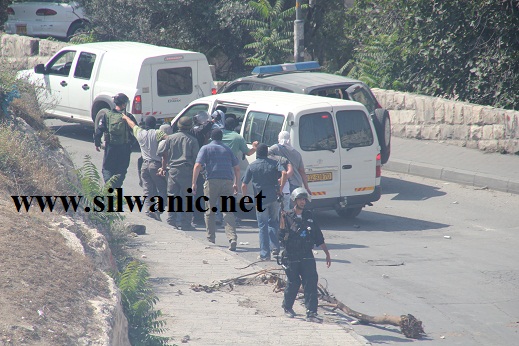 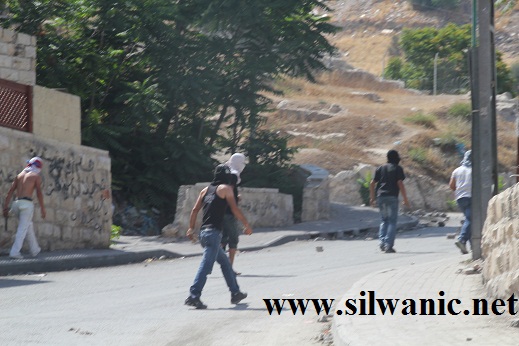 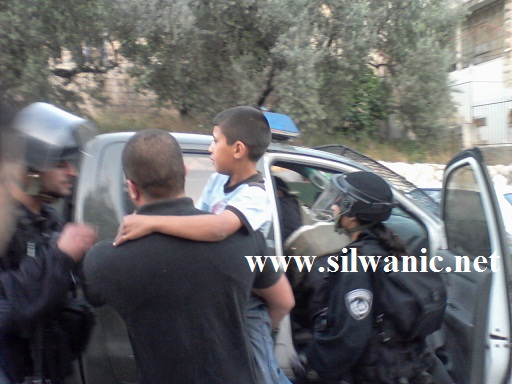 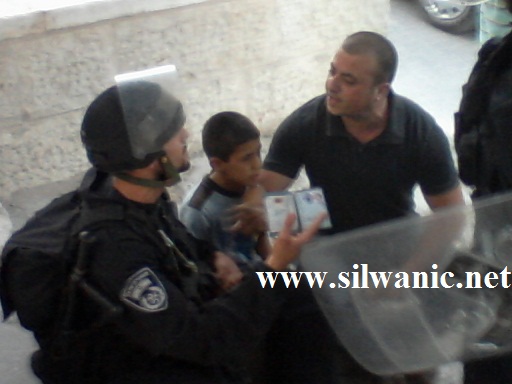