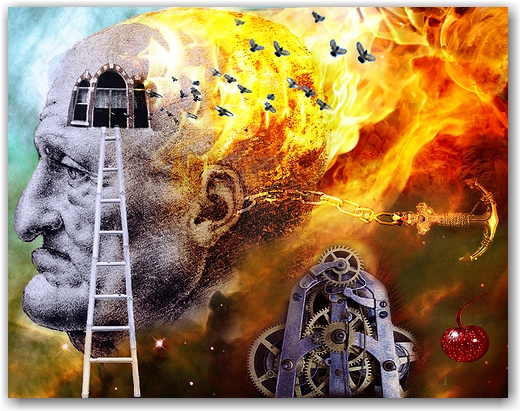 Q: Svali, what role does television play? From your point of view,as an ex-Illuminati trainer/programmer, how much of a mind-control device’really’ is it? How does it interact with the brain, what sounds and images areused for programming? What makes TV the perfect mind-control device for themasses? Give us some details please.
Svali: It is important to realize that whena person watches TV, they go into an alpha brain wave state, in which they aremore suggestible than normal. In fact, a LOT of Illuminati programming is donein alpha state, since the person is relaxed and highly suggestible. Have youever noticed the glazed expression on the face of a person who has beenwatching TV for any length of time? This is from being in prolonged alpha stateand a semi dissociative state (and this is for people who HAVE NOT been raisedwith mind control).
By Dean Henderson
LEFT HOOK
April 2, 2012
The Rothschild-ledinternational banking cartel learned long ago that it was much easier tobrainwash people than to face off with them in open combat. Over the pastdecades these techniques ~ led by television “programming” ~ have becomequite sophisticated.
The US tested numeroustop-secret high-tech weapons systems in the Gulf War theatre, while utilizingsome old low-frequency favorites.

When Iraqi ground forcessurrendered, many of them were in a state of delirium and lethargy that couldhave been induced by extremely low-frequency radio waves, which the US used asa weapon as early as the Vietnam conflict.

Yale University and CIApsychiatrist Dr. Jose Delgado studied mind control for the Company during the1950’s as part of the MK-ULTRA program.  Delgado determined,

“Physical control of manybrain functions is a demonstrated fact ~ it is even possible to create andfollow intentions. By electronic stimulation of specific cerebral structures,movements can be induced by radio command ~ by remote control.”

According to a militarydocument written by Colonel Paul Valley and Major Michael Aquino titled FromPSYOP to Mindwar: The Psychology of Victory, the US Army used anoperational weapons system “to map the minds of neutral and enemy individualsand then to change them in accordance with US national interests”.
The technique was used tosecure the surrender of 29,276 armed Viet Cong and North Vietnamese Armysoldiers in 1967 and 1968.  The US Navy was also heavily involved in“psychotronic” research. [1]
Many US soldiers whoserved near the DMZ that divided North and South Vietnam claimed to see UFOs ona regular basis.  The Pentagon Papers revealed that an electronicbarrier was placed along the DMZ by the secretive JASON Society.
Major Michael Aquino wasan Army psyops specialist in Vietnam, where his unit specialized indrug-inducement, brainwashing, virus injection, brain implants, hypnosis, anduse of electromagnetic fields and extremely low-frequency radio waves. After Vietnam, Aquino moved to San Francisco and founded the Temple of Set.
Set is the ancientEgyptian name for Lucifer.  Aquino was now a senior US MilitaryIntelligence official. [2]
He’d been given a TopSecret security clearance on June 9, 1981.  Less than a month later anArmy intelligence memo revealed that Aquino’s Temple of Set was an off-shoot ofAnton La Vey’s Church of Satan, also headquartered in San Francisco. Two otherSet members were Willie Browning and Dennis Mann.  Both were ArmyIntelligence officers.
The Temple of Set wasobsessed with military matters and political fascism. It was especiallypreoccupied with the Nazi Order of the Trapezoid.  Aquino’s “official” jobwas history professor at Golden Gate College.  The Temple recruited thesame Hells Angels who Billy Mellon Hitchcock had used to dole out his bad CIAacid.  Its members frequented prostitutes where they engaged in all mannerof sadomasochistic activities. [3]
Director of ArmyCounter-Intelligence Donald Press revealed that Dennis Mann was assigned to the306 PSYOPS Battalion and that Aquino was assigned to a top secret program knownas Presidio.
Presidio is also the nameof a spooky complex in the Golden Gate National Recreation Area, which MikhailGorbachev reportedly frequented as the Soviet Union was falling apart.
Was Aquino part of anoperation to “map the mind” of the Soviet Union’s last leader and induce himinto proposing both glasnost and perestroika, the two free marketpolicies that ultimately led to the Soviet Union’s demise?
Remember the curious markwhich suddenly appeared on Gorbachev’s forehead?  Was he implanted withsome sort of microchip mind-control device to make him think “in accordancewith US national interests”?
Such Orwellian technologyis marketed on a regular basis throughout the world.  InternationalHealthline Corporation and others sell microchip implants in the US, Russia andEurope.  The Humane Society has adopted a policy of micro-chipping allstray pets. The State of Hawaii requires that all pets be micro-chipped.
Six thousand people inSweden have accepted a microchip in their hand, which they use for allpurchases. Trials are also underway in Japan.  In July 2002, NationalPublic Radio reported a similar trial beginning in Seattle.  Later in2002, after a rash of suspicious abductions of young girls, BBC reported that aBritish company plans to implant children with microchips so that their parentscan monitor their whereabouts.
Dr. Carl Sanders, ahighly acclaimed electronics engineer, revealed that a microchip project helaunched to help people with severed spinal cords was taken over by the BillColby’s Operation Phoenix in a series of meetings organized by HenryKissinger.
Sanders says the optimalspot for a microchip implant is just below the hairline on a person’s forehead,since the device can be recharged by changes in body temperatures, which aremost pronounced there.

Interestingly, this isthe location of the pineal gland or Third Eye.

The 1986 EmigrationControl Act grants the President the power to mandate any kind of ID he deemsnecessary. [4]
Researchers at SouthernCalifornia have developed a chip which mimics the hippocampus, the part of thebrain that deals with memory.  Pentagon officials are interested in usingit in experiments to create a “super-soldier”. [5]
Another microchip calledBraingate is being implanted in paralyzed people.  It allows them tocontrol their environment by simply thinking. [6]
REPORT FROM IRON MOUNTAIN
In 1961 KennedyAdministration officials McGeorge Bundy, Robert McNamara and Dean Rusk, all CFRand Bilderberger members, led a study group which looked into “the problem ofpeace”.  The group met at Iron Mountain, a huge underground corporatenuclear shelter near Hudson, New York, where CFR think tank The Hudson Instituteis located.  The bunker contains redundant offices in case of nuclearattack for Exxon Mobil, Royal Dutch/Shell and JP Morgan Chase. [7]
A copy of the groupdiscussions, known as Report from Iron Mountain, was leaked by aparticipant and published in 1967 by Dial Press.
The report’s authors sawwar as necessary and desirable stating

“War itself is the basicsocial system, within which other secondary modes of social organizationconflict or conspire. (War is) the principal organizing force…the essential economicstabilizer of modern societies.”

The group worried thatthrough “ambiguous leadership” the “ruling administrative class” might lose itsability to “rationalize a desired war”, leading to the “actual disestablishmentof military institutions”.
The report goes on tosay,

“…the war system cannotresponsibly be allowed to disappear until…we know exactly what we plan to putin its place…The possibility of war provides the sense of external necessitywithout which no government can long remain in power…The basic authority of amodern state over its people resides in its war powers. War has served as thelast great safeguard against the elimination of necessary classes.”

Historian Howard Zinndescribed this conundrum when he wrote,

“American capitalism neededinternational rivalry ~ and periodic war ~ to create an artificial community ofinterest between rich and poor, supplanting the genuine community of interestamong the poor that showed itself in sporadic movements”.

The Iron Mountain gangwas not the first to discover the virtues of war.
In 1909 the trustees ofthe Andrew Carnegie Foundation for International Peace met to discuss pre-WWIAmerican life.  Many of the participants were members of Skull &Bones.  They concluded,

“There are no known meansmore efficient than war, assuming the objective is altering the life of anentire people…How do we involve the United States in a war?”

The Report from IronMountain goes on to propose a proper role for those of the lower classes,crediting military institutions with providing “antisocial elements with anacceptable role in the social structure.
The younger and moredangerous of these hostile social groupings have been kept under control by theSelective Service System…A possible surrogate for the control of potentialenemies of society is the reintroduction, in some form consistent with moderntechnology and political process, of slavery. The development of asophisticated form of slavery may be an absolute prerequisite for socialcontrol in a world at peace.”
The Iron Mountain goons,though thrilled by the idea of slavery, listed as other socioeconomicsubstitutions for war: a comprehensive social welfare program, a giantopen-ended space program aimed at unreachable targets, a permanent armsinspection regime, an omnipresent global police and peacekeeping force, massiveglobal environmental pollution which would require a large labor pool to cleanup, socially-oriented blood sports and a comprehensive eugenics program. [8]
The Iraqi genocidefulfilled the dreams of the Club of Rome Zero Population Growth maniacs, whilealso providing a testing ground for two of the war substitutes proposed by theIron Mountain fascists: an arms inspection regime and UN peacekeepers. Both concepts gained traction in the international community thanks to the GulfWar.
While the internationalbankers wanted to punish and depopulate the Iraqi people for their stubbornlysocialist leanings, which have historically kept the banker’s Four Horsemen oiltentacles out of the Iraqi oil patch; they wanted to keep Saddam Hussein inpower so that his past despotism ~  his panama~ could be used as a pretext for US military occupation of the Persian Gulfoil patch.
Just as Osama bin Ladenwould later prove useful to Four Horsemen designs in the Caspian Sea region,Saddam was the perfect villain in ensuring continued oligarchy hegemony overPersian Gulf oil reserves.
NOTES:
[1] Beholda Pale Horse. William Cooper. Light Technology Press. Sedona, AZ. 1991.p.369
[2] TheRobot’s Rebellion: A Story of Spiritual Renaissance. David Icke. GatewayBooks. Bath, UK. 1994. p.221
[3]Cooper. p.361
[4] Icke.p.223
[5] Inquirer.UK. 10-25-05
[6] PhysOrgNews. 11-1-95 www.physorg.com/news7746.html
[7] Ruleby Secrecy: The Hidden History that Connects the Trilateral Commission, theFreemasons and the Great Pyramids. Jim Marrs. HarperCollins Publishers. NewYork. 2000. p.114
[8] Ibid.116
DeanHenderson is the author of Big Oil& Their Bankers in the Persian Gulf: Four Horsemen, Eight Families &Their Global Intelligence, Narcotics & Terror Network, The Grateful Unrich: Revolution in 50Countries and Das Kartell derFederal Reserve. Subscriptions to his Left Hook blog are FREE atwww.deanhenderson.wordpress.com