HOW WE ARE IMPOVERISHED, GENTRIFIED AND SILENCED ~ AND WHAT TO DO ABOUT IT

WE ARE MANY: YE ARE FEW 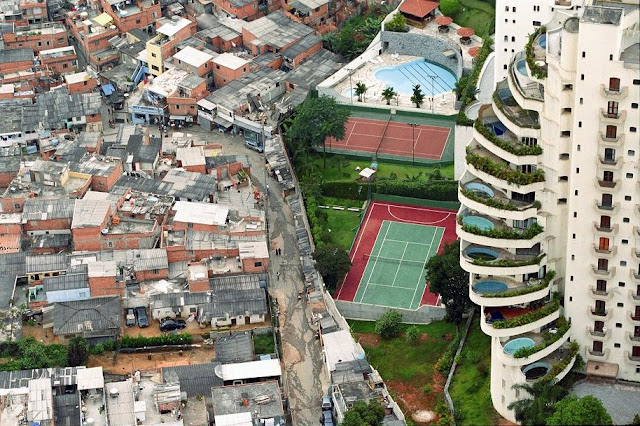 By John Pilger
July 28, 2013
I have known my postman for more than 20 years. Conscientious and good-humoured, he is the embodiment of public service at its best. The other day, I asked him, “Why are you standing in front of each door like a soldier on parade?”
“New system,” he replied, “I am no longer required simply to post the letters through the door. I have to approach every door in a certain way and put the letters through in a certain way.”
“Why?”
“Ask him.”
Across the street was a solemn young man, clipboard in hand, whose job was to stalk postmen and see they abided by the new rules, no doubt in preparation for privatisation. I told the stalker my postman was admirable. His face remained flat, except for a momentary flicker of confusion.

Initiative will be discouraged in these children, and insubordination, without being punished, will be scientifically trained out of them. ~ Bertrand Russell

In ‘Brave New World Revisited’, Aldous Huxley describes a new class conditioned to a normality that is not normal “because they are so well adjusted to our mode of existence, because their human voice has been silenced so early in their lives, that they do not even struggle or suffer or develop symptoms as the neurotic does”.
Surveillance is normal in the Age of Regression ~ as Edward Snowden revealed.
Ubiquitous cameras are normal.
Subverted freedoms are normal.
Effective public dissent is now controlled by police, whose intimidation is normal.
The traducing of noble words like “democracy”, “reform”, “welfare” and “public service” is normal.
Prime ministers who lie openly about lobbyists and war aims are normal.
The export of £4bn worth of British arms, including crowd control ammunition, to the medieval state of Saudi Arabia, where apostasy is a capital crime, is normal.
The wilful destruction of efficient, popular public institutions like the Royal Mail is normal. A postman is no longer a postman, going about his decent work; he is an automaton to be watched, a box to be ticked. Huxley described this regression as insane and our “perfect adjustment to that abnormal society” a sign of the madness.
Are we “perfectly adjusted” to this? No, not yet. People defend hospitals from closure, UK Uncut forces bank branches to close and six brave women climb the highest building in Europe to show the havoc caused by the oil companies in the Arctic. There, the list begins to peter out.
At this year’s Manchester festival, Percy Bysshe Shelley’s epic Masque of Anarchy ~ all 91 verses written in rage at the massacre of Lancashire people protesting poverty in 1819 ~ is an acclaimed theatrical piece, and utterly divorced from the world outside.
Yet, last January, the Greater Manchester Poverty Commission disclosed that 600,000 Mancunians were living in “extreme poverty” and that 1.6 million, or nearly half the city’s population, were “sliding into deeper poverty”.
Poverty has been gentrified. The Parkhill Estate in Sheffield was once an edifice of public housing ~ unloved by many for its Le Corbusier brutalism, poor maintenance and lack of facilities.
With its Heritage Grade II listing, it has been renovated and privatized. Two thirds of the old flats have been reborn as modern apartments selling to “professionals”, including designers, architects and a social historian. In the sales office you can buy designer mugs and cushions. This façade offers not a hint that, devastated by the government’s “austerity” cuts, Sheffield has a social housing waiting list of 60,000 people.
Parkhill is a symbol of the two thirds society that is Britain today. The gentrified third do well, some of them extremely well, a third struggle to get by on credit and the rest slide into poverty.
Although the majority of the British are working class ~ whether or not they see themselves that way ~ a gentrified minority dominates parliament, senior management and the media. David Cameron, Nick and Ed Milliband are their authentic representatives, with only minor technical difference between their parties. They fix the limits of political life and debate, aided by gentrified journalism and the “identity” industry. The greatest ever transfer of wealth upwards is a given. Social justice has been replaced by meaningless “fairness”.
While promoting this normality, the BBC rewards a senior functionary almost £1m. Although regarding itself as the media equivalent of the Church of England, the Corporation now has ethics comparable with those of the “security” companies G4S and Serco ~ which, says the government, have “overcharged” on public services by tens of millions of pounds. In other countries, this is called corruption.
Like the fire sale of the power utilities, water and the railways, the sale of Royal Mail is to be achieved with bribery and the collaboration of the union leadership, regardless of its vocal outrage.
Opening his 1983 documentary series Questions of Leadership, Ken Loach shows trade union leaders exhorting the masses.
The same men are then shown, older and florid, adorned in the ermine of the House of Lords. In the recent Queen’s Birthday honours, the general secretary of the TUC, Brendan Barber, received his knighthood.
How long can the British watch the uprisings across the world and do little apart from mourn the long-dead Labour Party?
The Edward Snowden revelations show the infrastructure of a police state emerging in Europe, especially Britain. Yet, people are more aware than ever before; and governments fear popular resistance – which is why truth-tellers are isolated, smeared and pursued.
Momentous change almost always begins with the courage of people taking back their own lives against the odds.
There is no other way now.
Direct action.
Civil disobedience.
Unerring.
Read Percy Shelley ~ “Ye are many; they are few”.
And do it.
Bookmark the permalink.