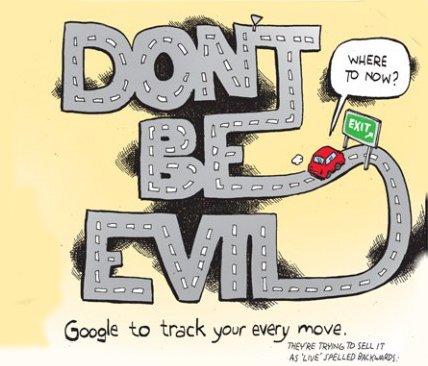 ED: We already are aware of just what Wikipedia is. Now for more skewed information access and digging into your own personal interests….
.
Google is making a big change to how it displays results in its dominant search engine.  It is rolling out a new feature called the Knowledge Graph which breaks from the traditional practice of matching keywords with web pages.
.
According to an article on Blog Tips about Google’s Knowledge Graph, immediate answers or “facts” from pre-selected sources like the CIA Factbook, Wikipedia, and the World Bank will be provided in search results alongside the organic results:
.
Instead of using the typical search strength of a particular answer, this new feature will draw ‘facts’ from places like Wikipedia for historical information, CIA World Factbook for geopolitical answers, the World Bank for economic facts, Freebase for information about people and other predetermined sources.
.
This move by Google seems eerily similar to Orwell’s Ministry of Truth in that search results, or “answers and facts”, will no longer be gathered based on the algorithmic popularity of content, but rather selected by Google.
.
Sure, most would argue that Wikipedia does a pretty good job through its open-source format to nail down basic facts.  However, the CIA and the World Bank are organizations with agendas sometimes counter to the truth, and making them the authority on facts gives them tremendous power to shape public knowledge.
Google also explains how it will collect data on you using the Knowledge Graph:
.
.
Google-owned Freebase will also be used in the Google Knowledge Graph.  Freebase is a massive database, which according to Singularity Hub already “has data on over 24 million people, places, and things.”
.

.
Google then combines its Freebase with Metaweb algorithms to connect everything and everyone.  For the purposes of improving searches, this may be wonderful, but it’s the exact type of software that can easily build and organize a profile on all Internet users.
.
Watch how they’re already connecting your data points below:
.
.So besides relying on the CIA and the World Bank to force feed Internet users “facts”, they will also construct and display how each person appears in these new searches.