GM ENVIRO-PIG WON’T GO TO MARKET: ON TO HUMANELY SOLVING AN ENVIRONMENTAL PROBLEM 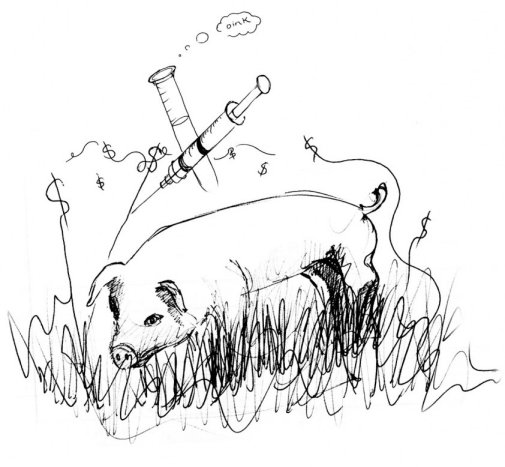 Not a word is mentioned about Monsanto, but patenting the pig has been part of their business for some time. Let us hope this rejection of Enviro-pig by Canada sends Monsanto yet another message. We, the public, the consumers, do NOT want meddling in our food chain!
Heather Callaghan
Activist Post
April 4,2012
Last year, the media was buzzing about the possibility ofEnviro-pig entering the American and Canadian food markets.

The way our regulatory agencies work is to keep pending approvals forgenetically modified animals on file, in secret, until a decision determines ifit’s suddenly in the stores unlabeled, or no, not yet.

Enviro-pig is a creation from Canada’s University of Guelphscientists and hog industry Ontario Pork. Birthed in 1999, with 10 generationssince.
The DNA of Yorkshire pigs were spliced with DNA from e.coli forphosphorous digestion and mice DNA to promote the e.coli gene. The pigs’make-up was changed to allow the enzyme phytase in their saliva to cut thephosphorous in their manure by about 30 percent.
Enviro-pig could have gone to market for human consumptionanytime. However, in a miraculous turn of events, Ontario Pork decided to cutresearch funding and close active research before the potential approval. Theuniversity cannot continue breeding the pigs without the funding.
“There’s no demand or need for genetically modifying foodanimals. The federal government should stop accepting requests to approve GMfood animals,” said Lucy Sharratt of Canadian Biotechnology Action Network, acoalition of 18 groups that campaigned to prevent the GM food pigs from beingapproved for consumers. Also from CBAN’s press release:

“It’s clear that consumers oppose GM animals so we’re relievedthe project is being shelved. The GM pig was going to drive consumers away fromeating pork if it was ever approved for market,” said Paul Slomp, YouthVice-President of the National Farmers Union.

[When the first such pig was created in 1999] I had the feelingin seven or eight or nine years that transgenic animals probably would beacceptable. But I was wrong. It’s time to stop the program until the rest ofthe world catches up ~  and it is going tocatch up.

Dr.Forsberg is retaining Enviro-pig semen on the chance “the world catches upwith him” and a company is willing to take on the GM pigs in the future.

Mouse-pig or Franken-Swine could have been the very first GM animal forconsumption ~ bacon just wouldn’t have been the same again; and, actually, itisn’t.

WHAT ABOUT THE REMAINING MESS?
Thehighly phosphorous pig poo is a real environmental concern. The waste run-offfrom CAFOs bleeds into waterways and creates mega algae blooms that choke thewater and kill marine life.
That inturn can kill cattle and pets that drink out of the water.

It’s the Circle of Death ~ but the cycle is only beginning.

The supposed intention behind the ironically named Enviro-pigwas the environment, but that’s a giant load of steaming hog manure ~ otherwisethe pigs themselves would be given better treatment and diets (likecost-effective phytase supplements) to lower phosphorous waste.

It would make more sense than spending millions to change over theentire ecological system.
Ontario Pork producers have contributed more than $1 million toEnviro-pig research. Ontario’s provincial government also invested inEnviro-pig research which has cost over $5-million.
Monsanto, other biotech giants, and the Corn RefinersAssociation (the ones with those “HFCS is good for you” ads) also hadeverything to gain from this tidy little arrangement, and still do. This isanother big problem with the typical factory farm complex versus blaming pigsfor doing what pigs naturally do.

Pigs need phosphorous for bone, teeth, and cell formation but their typical Bt corn and soybean dietsleave them with 80% of their phosphorous in an non-digestible form.

That and stuffing a thousand pigs into one facility is what caused thephosphorous mess.

That phosphorous manure is then heaped on the GM corn and soy as fertilizer,further increasing the indigestible phosphorous diet. The Circle of Deathcontinues.

The answer to the environmental problem caused by GMOs is not more geneticmodification!

There are already many solutions to this problem includingreducing the number of pigs raised in one place, changing feed ingredients,trucking liquid manure longer distances, dry composting manure, or expandingthe area of land for spreading manure. Additionally, there is already thecost-effective, simple technological fix of a phytase supplement that can beadded to hog feed.

ENVIRO-PIG ALREADY PRODUCED BIO-HAZARDS IN PLANNINGSTAGE
In 2002, a precedent for contamination was set when eleven GMpiglets at the University were sent to a rendering plant and turned into animalfeed (unapproved) instead of being destroyed as biological waste. Theycontaminated 675 tons of poultry feed that was sold to egg, turkey and chickenfarmers in Ontario!

Former vice president of research at the University of Guelph said of theincident,

“Things you don’t expect to happen can happen.”

Againin 2004, experimental GM pharma-pigs from the Quebec company TGN Biotech wereaccidentally[?] turned into chicken feed instead of being safely destroyed.
HOW DID ENVIRO-PIG ALMOST PASS; WHAT CHANGED?
Health Canada doesn’t conduct its own GM tests. They rely onUnited Nations Codex guidelines and refer to the FDA, also pointing to Codex.They were also taking the word of University of Guelph data. Canadian and USregulatory guidelines allowed for the approval of the GM animals at any time.
Pork producers were afraid to associate with Enviro-pig for fear of bad publicrelations. Enviro-pig is safely off the shelf thanks to concerned farmers andactivists like you creating more awareness. Especially the tenacious efforts ofCBAN.Gratefully so ~ we get around 40% of our pork from Canada. CBAN will nowredouble their efforts of stopping GM super-growing salmon.
As we can see, the closed research was more a result of consumerreaction and activism than anything else. At the very least, Enviro-pig servedto shed light on the problems with GM mega-farm conditions and a realenvironmental problem that still exists.

The media might bemoan the naysayers who tried to stop the “goodguys” who already pumped millions into a misguided “solution”for the environment. Truthfully, the pigs, environment and farming markets aremuch safer with Enviro-pig’s timely exit. 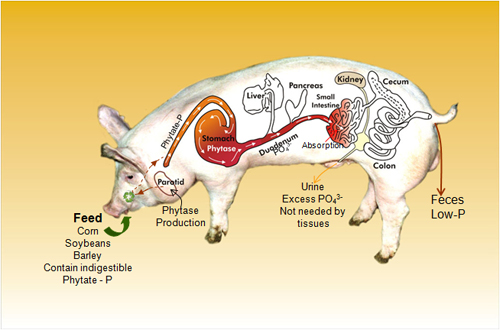 Read other articles by