THE FOUNTAIN OF RECOVERY 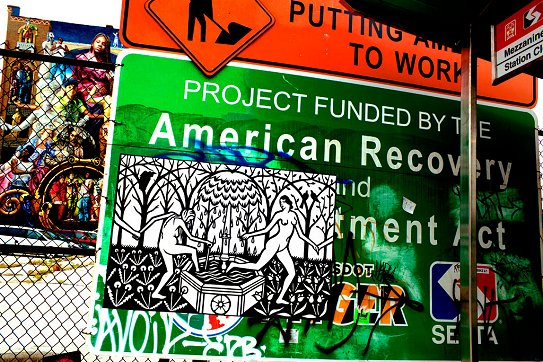 Words and photographs by Linh Dinh

Dissident Voice
May 23rd, 2012
The fountain of recovery.Until 1982, Philadelphia had three daily newspapers, and the surviving two, the Inquirer and Daily News, are owned by the same company. Both are hurting. Fewer and fewer readers force extreme cost-cutting measures that reduce the quality of each rag, which means even fewer readers. Competition from the internet, as well as the degraded reading habits it fosters, choppier and sloppier, are mostly to blame, but corporate greed and shortsightedness also played an important role.
The Inquirer used to rake in Pulitzers, but serious reporting required a sustained investment of money, time and intellect, so when its then-owner, Knight Ridder, balked at this, the Philadelphia newspapers went into their death spiral. This is no local phenomenon, because the entire country is suffering from the dearth of hard-hitting news about anything that really matters: Wall Street and DC corruption; constant lying from our government; an endless war that’s bankrupting the nation and begging for blowbacks and, soon enough, riots; or the accelerating collapse of the economy, and thus, your way of life.
In their stead, encyclopedic sports coverage and celebrity gossips, as purveyed by various moronic outfits. Today’s earth quaking burp from Yahoo!, “The prince says an unusual noise kept him awake the night before his nuptials.”
Divorced from local news and conversations, rootless and detached from what’s closest to them, most Americans are drag netted into a national matrix as defined by cynical or sinister mind fuckers who care nothing about them or their individual communities.
Yahoo! is run out of San Jose, long a cultural wasteland, but it was the home of Gary Webb, an American hero who broke the story about the CIA pushing crack cocaine to LA blacks to fund its covert war in Nicaragua. For being an excellent and ethical journalist, Webb was ran out of a job, then hounded into committing suicide, the official story, or simply killed. In any case, what happened to Webb is an apt parable for an America that punishes integrity and bravery, and rewards dishonesty and cowardice. In such a society, degradation is guaranteed. 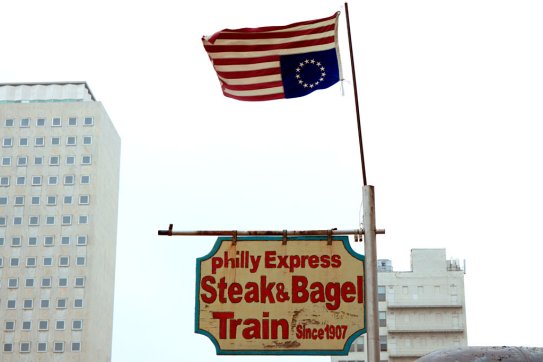 Yesterday, I walked by the Daily Newsand Inquirerheadquarters and saw, in its window, a blown-up cover about Chase Utley, an aging and often-injured second baseman. Like the country itself, the city is unraveling, but let’s fret over the Phillies, Sixers, Flyers and Eagles. Hey, how about dem Birds! Across the street, I spotted something unusual, however: an upside down 13-star flag in front of the Steak & Bagel Train, a diner in business since 1907. We’re due for another American Revolution, wouldn’t you say?
As I photographed this provocation, a security guard from the adjacent building marched over, “Hey, I didn’t even see that! Somebody is going to burn his place down. I’ve got to ask him tomorrow what’s up with that.” He also informed me that a flag cannot be up at night, unlit, and that he had a flag on his front porch, with a spot light shining on it.
“It’s freedom of speech,” I said to this security dude. “He probably thinks the country is in distress.”
“Yeah, but he’s playing with fire, buddy. Somebody is going to burn his place down.”
So for being a good enough citizen to rouse your compatriots from their slumber, you and yours may be torched, or, like Bradley Manning, held in solitary confinement and stripped naked each night.
Don’t rock the USS Full Spectrum Blowhard Righteous Recovery, you terrorist asshole, though this ship has neither fuel nor compass, nor even rats, not unless you count the Congressmen, Senators, Cabinet Members and Supreme Court Justices surrounding an oil-slick and blood splattered POTUS. 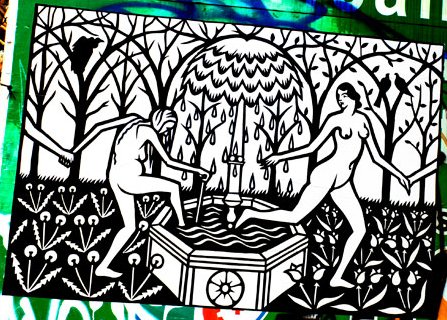 A block from the newspaper office, I saw a sign common in many distressed neighborhoods, “PROJECT FUNDED BY THE American Recovery and Reinvestment Act.” I wasn’t sure what the project was, but the sign itself had been well tagged by graffiti, plus some clever guerilla art, a depiction of the Fountain of Youth.
Seen from the side, a hag, with cane and sagging breasts, enters a fountain, then emerges as a lovely young lady, proudly frontal in her nudity. The hag half is shadowed by a vulture and littered with thorny weeds, while the sexy chick half is serenaded by song birds and blooming with flowers. No spring chicken myself, I wouldn’t mind a personal recovery through a dip in some miraculous pool, but as with Juan Ponce de León and his dolorous dick, to believe in magic is to court disaster.
Speaking of the paranormal, let’s walk a few blocks up Broad Street to check out the hulking ruins of the Father Divine Hotel. Few remember him now, but Father Divine was once nationally famous. Known as America’s first cult leader and an inspiration to Jim Jones, Father Divine inspired his followers with the commonsensical, such as being self-reliant and debt-free; to the idealistic, such as being color blind, even to yourself; to the puritanical, such as abstaining from tobacco, alcohol and gambling; to the weirdly ascetic, such as total celibacy even among married couples. 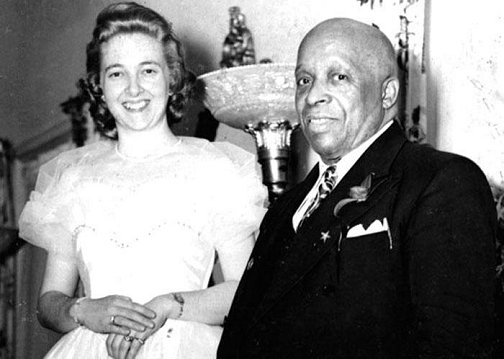 Mother and Father Divine.
Though he declared himself a living god, and his second wife, four decades his junior, to be the reincarnation of his first wife, his followers believed everything their 5’2” leader said because he was supremely confident and a charismatic speaker, and when he died, many of his devotees even thought he would rise again. It is telling that Father Divine’s movement peaked during the Great Depression. Now that we’re entering what promises to be an even greater period of material and spiritual despair, which Father Divine will rise up to save the desperate and gullible?
Instead of preaching self-control, racial harmony and charity, what bitter impulses will they unleash?
The magical Fountain of Recovery will likely gush blood.
Linh Dinh is the author of two books of stories, five of poems, and a just released novel, Love Like Hate. He’s tracking our deteriorating socialscape through his frequently updated photo blog, State of the Union. Read other articles by Linh.
Bookmark the permalink.