EASTER IN THE CULT 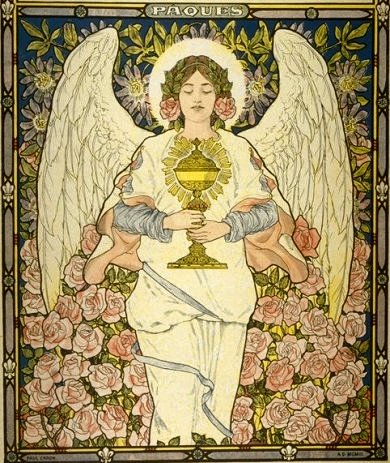 The holy day is celebrated by billions of Christians and Catholics around the world at this time.
And now a few words about her Easter memories froma survivor of ritual abuse and trauma based MK Ultra mind control.
By Svali
Svali Speaks
September 16, 2008
Easter in the Cult
There are certain times ofthe year that are particularly difficult for survivors of generational occult.These are “holiday dates” that correspond to rituals celebrated by occultgroups.
While the actual ritesand practices may vary somewhat from group to group, there are certainsimilarities among many.
Easter is one such time.
In the group that I grewup in, during the daytime I was allowed a normal experience. Easter was acelebration of springtime, of lengthening days, and the new flowers signalingwinter’s end. I often enjoyed playing with waving palm branches during PalmSunday, and hunting for Easter eggs on the church grounds. And of course, everyyear a small Easter basket appeared with a chocolate rabbit or lamb.
But at night, the holidaytime was celebrated in a very different manner.
The preparation leadingup to it often lasted during the week before (there was no school during Easterweek when I was a child, in the years before “Spring break” became common. Mostschools let out for a week to ten days during this week).
The events of this timewere quite painful ~ including brutalization, sexual abuse and other ritualssurrounding fertility rites ~ culminating at the end of the week with a mockcrucifixion.
Often a child would bechosen to undergo crucifixion in a grim mockery of the Christian celebration,and the adults would state that this ritual was an offering to debase theChristian tradition and show its lack of meaning.
I do know that young boyswere chosen for this ritual, and it was horrible to see.
At times, a mock“resurrection” ceremony might occur, but the resurrector was not Jesus, but ademonic entity who would enter into the person brought to a near death state.
The spiritual roots ofthese ceremonies were created to allow the passage of the demonic into theparticipants, and to “seal” them as they participated in the ceremony. Attimes, a golden chalice was passed between participants, and the child’s bloodfilled the cup that participants drank.
I am finding in myhealing that more and more of what was done to me involved dark occultceremonies as a child, such as I describe here. These ceremonies allowed theentrance of the demonic, and one of the hardest parts of the group programmingto break has been the hold that these memories, and the spiritual destructionthat ensued, has had on me.
Part of my own healingprocess is involving undergoing deliverance, and replacing the gruesome,negative spirituality of my childhood with a faith that includes love, mercy,and forgiveness, the antithesis of the harsh and punishing ceremonies that Isaw.
One of the most importanttasks for the survivor when remembering these types of events, (and anniversarydates often bring memories) is to find healing and self-forgiveness forparticipating, and to reach out for a belief system that can replace thenegative. For me, that belief is Christianity, and my hope is that others willknow its comfort during this difficult time of year.
It can also help torealize that so often the group makes certain things sound final. “You aresealed for life”, they tell the children, or “You agreed to this, and now youare one of us forever.”
This is nonsense. Nocontract is binding forever, especially one created under coercion, and once aperson has free choice, they can choose to break childhood spiritual contractsmade under duress.
The group during holidaysand ritual events tries to inculcate helplessness and a feeling that “Now I cannever leave”, but this message is absolutely false and plays on a small child’sfears. Instead, as an adult, the survivor has choices, and can choose to breakthose covenants and enter into freedom.
This is a battle, and Idon’t want to make it sound as if it is easy. It isn’t, and I am still battlingthis is my own life, but it is well worth breaking free of the hold that theseceremonies and demonic entanglements have in the life of the survivor.