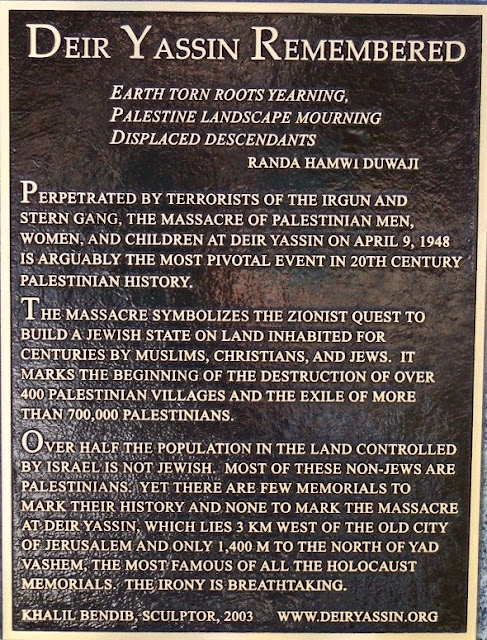 International recognition of this atrocious war crime is long overdue. Let them learn the truth about what was done to these people. The link provided at the bottom will speak to these horrible truths. Not for the faint of heart.
By Paul Eisen* | UprootedPalestinians | April 8, 2012
On April 23 in London,Deir Yassin Remembered and The General Union of Palestinian Students will becommemorating Deir Yassin Day 2012.
Deir Yassin Daycommemorates the Deir Yassin massacre of April 9th 1948.
Not the only massacre atthat time and by no means the worst, Deir Yassin signaled and has come to symbolize, the dispossession of the Palestinian people and their continuingexile.
April 23 is also thebirthday of Miguel Cervantes creator of Don Quixote and of Roy Orbison creatorof “Only the Lonely” ~ and a man who, just when you thought he could go nohigher ~ up an octave he’d go.
It’s also the birth- and death day of WilliamShakespeare ~ highly appropriate for a man known for his immaculate dramaticstructure and pleasing endings.
But in England April 23rdis above all, St. George’s Day. St George is the patron Saint of England andstrangely, St George was a Palestinian.
George hailed from thePalestinian town of Lydda, turned into an airport in 1948 and named Lod, andnamed again after the great ethnic-cleanser David Ben Gurion. Like Deir Yassinitself, the story of Lydda could serve as a template for all the expulsions andmassacres of 1948.
At Deir Yassin theperpetrators massacred over a hundred villagers and burned their bodies.
Others were loaded ontotrucks and paraded through the streets of Jewish Jerusalem, then taken to anearby quarry and shot. Orphaned children of Deir Yassin, dragged from underthe bodies of their dead and dying relatives were taken and dumped, dazed andbleeding, in a Jerusalem alley.
At Lydda the Israelismassacred 426 men, women, and children; 176 slaughtered in the town’s mainmosque and the remainder driven into exile. Forced to walk in the summer heat,they left behind them a trail of bodies ~ men, women and children. It was thePalestinians’ very own ‘Trail of Tears’.
And, just like at DeirYassin, the town of Lydda was repopulated with Jewish immigrants, the nameHebraised to Lod and, like the name Deir Yassin, the name Lydda was wiped offthe map.
At our commemoration DYRand GUPS will be joined by the Palestinian Delegation, the Palestiniancommunity of the U.K. and many British and other supporters. We will also bejoined by Abu Ashraf, now of Azaria but once of Deir Yassin ~ because in April1948 Abu Ashraf lived in Deir Yassin and, on April 9th at the time of themassacre, was a few days short of his eighth birthday.
So, it’s fitting that ourcommemoration be held on April 23rd, St. George’s Day; in London, the capitalof England, and led by Abu Ashraf of Deir Yassin.
* (With thanks to Stuart Littlewood)
For more information on Deir Yassin, please go here: