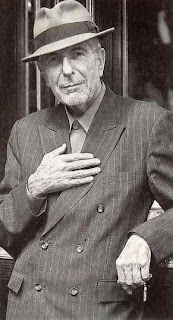 Honor de Balzac
Masonry’ s homage to the heart by the Sign of Hand on Heart can best be understood by the fact that the leaders of the Masonic Lodge themselves boast that the rituals of Freemasonry hearken back to ancient Egyptian religion. The Egyptian Book of the Dead addressed prayers to “My heart of my mother…My heart of transformations,” meaning the source of rebirths.

The Mother Goddess of Egypt was worshipped by various names ~ Isis, Hathor, Rhea, etc. She was the one to whom the people “gave their hearts,” meaning their heart-felt devotion and allegiance. As the Goddess of sacrifices, it was deemed necessary by her admirers that men should sacrifice their “energies” on her behalf. The Goddess was said to take possession of men’s hearts.

Cutting Out Hearts and Eating Them!
In the pyramids of Mexico, Central and South America, the Gods were also Gods of sacrifice and, once again, the heart was the centerpiece of devotion. Bloodthirsty followers, egged on by high priests, cut out the hearts of victims of tribal wars.

On the stone altars of the temples, the priests cut the heart out of the breast of sacrificial victims while they were still alive! The hearts were eaten, just as they were in ancient Egypt and as they are in a number of satanic cults in existence today.

Back to Egypt
Freemasonry today freely admits its connection to the religion and rituals of ancient Egypt and proudly displays Egyptian idols (the Sphinx, etc.) in and around its lodge facilities and at its international headquarters, the House of the Temple in Washington, D.C.

Moreover, in the ritual ceremonies of the higher Masonic degrees, the Hindu pantheon of deities is honored as the true “Holy Trinity.”1 In the Hindu religion, the whole universe is said to be centered in the heart. The Yogi, in meditation, is claimed to be listening to the heartbeat of the universe, which is the great God Shiva’s beating heart. This expresses the basic oriental idea that divinity lies in the heart of every person, but needs to be “realized,” or awakened.

Devotion to the Secret Chiefs
Within the Illuminati structure, the initiate is taught in no uncertain terms that he must devote his whole heart to the “secret chiefs,” the top elite who comprise the Inner Circle. His life must be dedicated to the goals they have set, for they, in turn, are being directed by the Hierarchy, the spirit beings (Satan and his demons) who have given them The Plan.

In other words, the life of every Illuminist is a divine temple, and through ritual, magic, and loyal devotion the Great Work of alchemical transformation is to be accomplished within the individual heart and within the world at large. Ordo Ab Chao — order must come out of chaos.

A Number of Meanings

As the evidence points out in the illustrations in this section, the “hand on heart” sign has a number of meanings, depending particularly on the exact placement of the hand and the positioning of the fingers. As always, the left hand on heart indicates the sinister occultic path. The thumb extended upward leaving the hand squared in the “L” position signals fidelity, sincerity and being “on the square.” The thumb upward symbolizes the child-soul, the heart in subjection to higher powers.
The sign of Hand on Heart is practiced and taught in the rituals for many degrees of Freemasonry.
For example:
~ In the Degree of Sublime Knights Elected, the candidate is instructed in the sign. His right hand is extended across the chest to the heart and the thumb is pointed upward. (Richardson’s Monitor of Freemasonry, p. 147)
~ In the Degree of Companion Select, the sign is given with the right hand. (Richardson’s Monitor of Freemasonry, p. 86)
~ In the Degree of Select Master, the initiate is told “The most popular signs in Masonry are made in this manner: Place the palm of the right hand on the heart, and pronounce the word SECRESY.” (Richardson’s Monitor of Freemasonry, p. 80)
~ In the Degree of the Knight of the Pelican and Eagle Sovereign Prince Rose Croix of Heredom, the lecturer directs the assembled members to “pass to the Black Room, 18° collars being reversed.” Following this instruction, the sign of “right hand on left breast is given.” (18th Degree Secret Initiation Ceremony)

~ In the Degree of Mark Master, the members form and march around the Lodge, singing a song. The words of the song include the following: “Mark Masters all appear Before the Chief Overseer… You who have passed the square, For your rewards prepare, Join heart and hand…Wages to you are due, At your command.” (Duncan’s Masonic Ritual and Monitor, p. 161)
Separation of Fingers as Sign is Given
Separating the fingers has its own interpretation, often being the sign of choice for cabalists who employ the letters of the Hebrew alphabet in their hand on heart communications.
The illustrations of Christopher Columbus and Ignatius Loyola in this chapter are prime examples. Both of these historical characters were members of secret cabalistic orders founded by the rabbis of the Jewish Sanhedrin.

The Illuminist/Masonic sign should not be confused with the American custom of placing one’s hand over the heart while reciting the Pledge of Allegiance to the flag (Citizens of some other nations practice this same tradition). Again, in judging the Illuminist intent, we look to such factors as time period, the history and affiliations, who’s performing the sign, and other factors.
As always in this book, I leave it to you, the reader, to form your own learned opinion of what you are seeing. 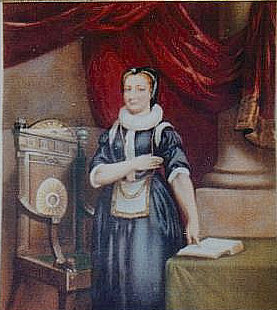 Freemasons strongly deny there are any women in their Order. But in Mac key’s Encyclopedia of Freemasonry we find this picture captioned, “Lady Freemason Mrs. Elizabeth Aldworth.” In the text (page 353), Mackey. 33°, former Sovereign Grand Commander of the Scottish Rite, writes that, “there are a few instances in which the otherwise unalterable rule of female exclusion has been made to yield.” 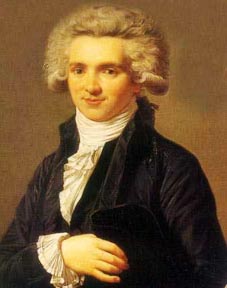 Robespierre, the heartless monster of the French Revolution. Inspirer of the Jacobins sect, Robespierre caused untold thousands to be sent to the guillotine. Rejecting Jesus, he called for a new religion based on worship of a nameless “Supreme Being.”
After relishing so many of his opponents being sent to their death, one day the tumbrel carriage came also for Robespierre, the Jewish plotter of terror, who himself lost his head. As his head rolled, the mob laughed and cried out “Do you feel any pain, your majesty?” 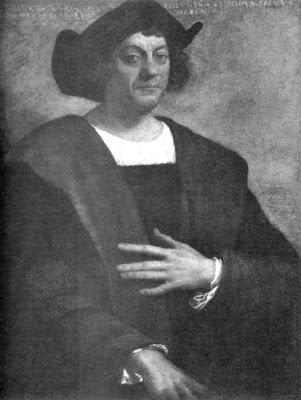 Was Christopher Columbus a clandestine member of the Knights Templar, or another 15th century secret society? Much evidence exists confirming exactly that.
So, too, does the cabalistic sign he displays of the left-handed path of the initiate. (Oil painting by Sebastiano del Piombo, 1519) 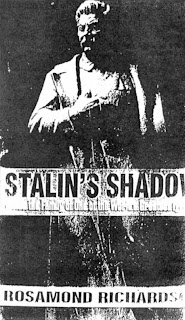 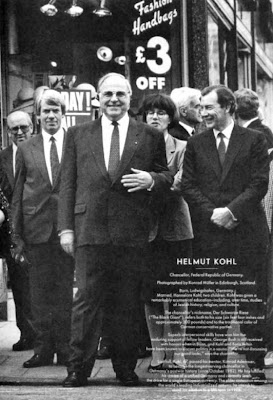 Helmut Kohl was the longest-serving Chancellor in the history of post-World War II Germany. Kohl, a servant of the Illuminati’s inner circle, worked to unify Germany and empower the European Community.
He is a Bilderberger, a covert Jewish Mason, and initiate of numerous secret societies and orders. Here we see the Chancellor strike an Illuminist pose, being the only person pictured who gives the necessary sign. (Photo: Vanity Fair magazine, November 1997) 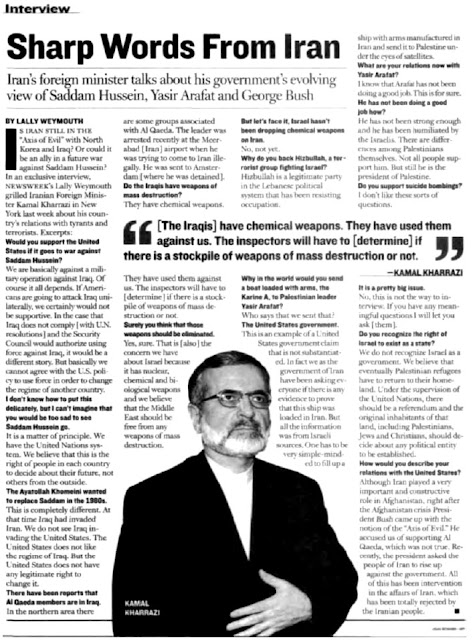 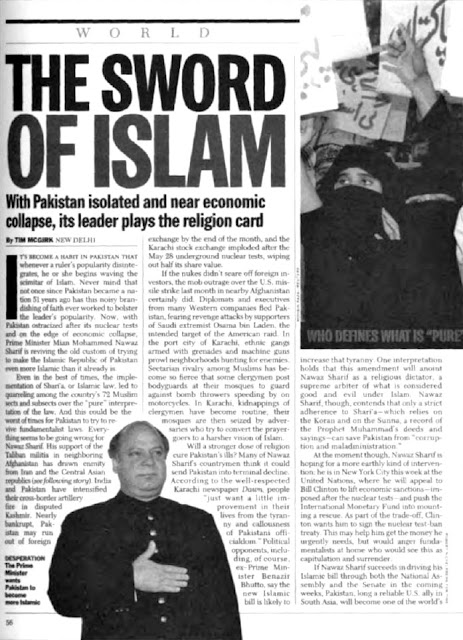 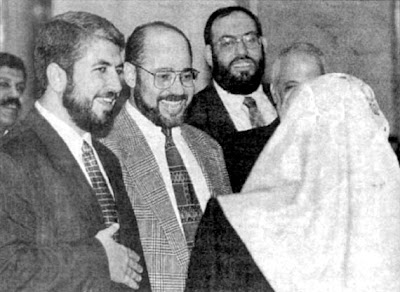 In Palestine, a senior Hamas official Khaled Mashaal welcomes Jordanian and other guests to a dinner. 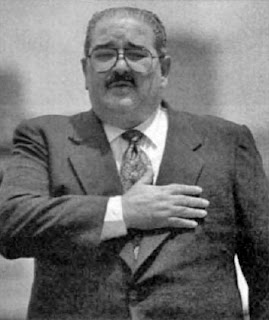 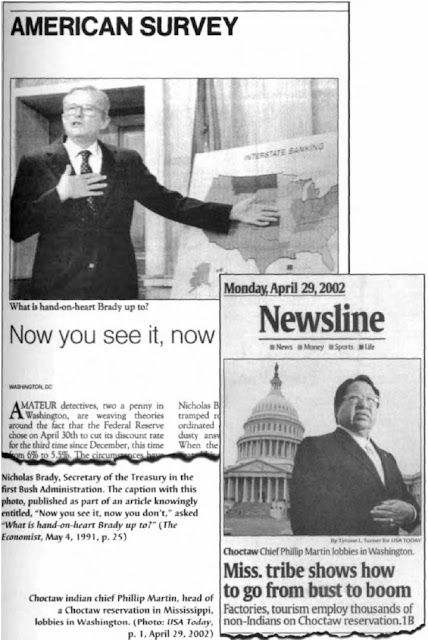 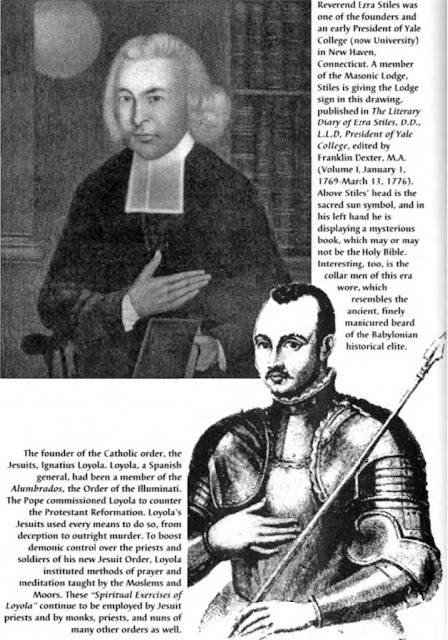 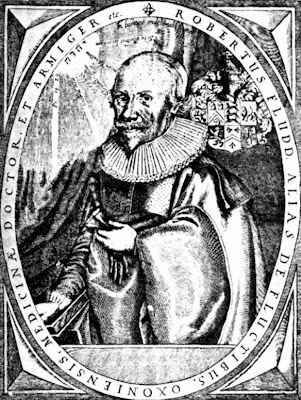 Robert Fludd (1574-1637), medical doctor and hermeticist of the late English Renaissance, was a Rosicrucian and practitioner of the magical arts who emphasized the power of visual and imaginative symbols. 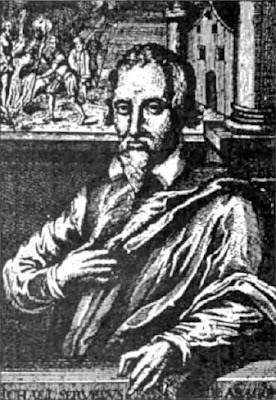 Michael Servetus who, in 1555, was burned at the stake by Calvinists for having published a treatise disagreeing with the doctrine of the Trinity.
Servetus, an enemy of Christ, was an llluminist who worked to bring in heresies to pollute Christianity. He has been called “The Father of Unitarianism.” 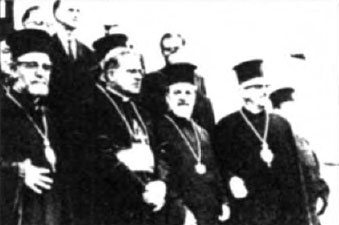 A top official of the Orthodox hierarchy in Greece gives the initiate sign. 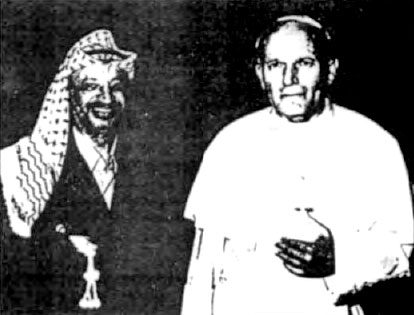 The Pope with Palestinian leader Yassar Arafat, at the Vatican on September 15, 1982. 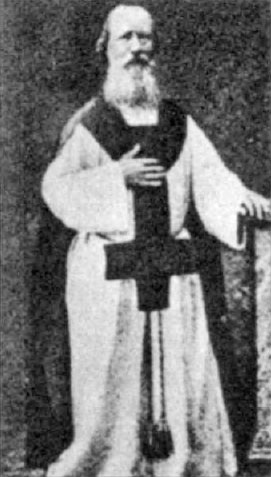 Eugene Vintras, a Frenchman who taught occult spiritual philosophy, wears the upside down cross on his religious robe and presents the sigil (hand sign) of his Order. Vintras gained a large following in the 1830s and 1840s by declaring the coming of a dark Prince, a Godon earth who would rule and reign.

A chief rabbi in Ottoman Turkey (from the book, The Lost Messiah: In Search of the Mystical Rabbi Sabbatai Sevi, by John Freely (Woodstock and New York: The Overlook Press, 2001) 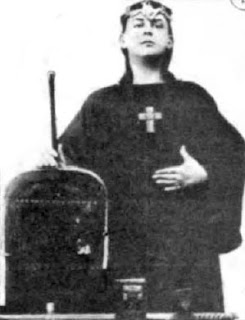 Aleister Crowley, as a youth, in his occult regalia. Crowley, whose books were the basis later for Anton LaVey, founder of the Church of Satan and Michael Aquino, founder of the Temple of Set.
Crowley also inspired L. Ron Hubbard, founder of Scientology. 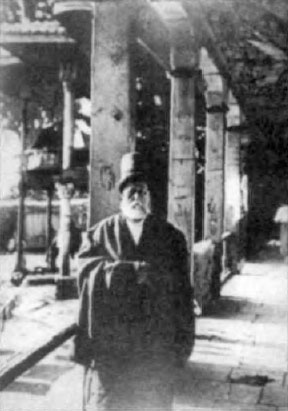 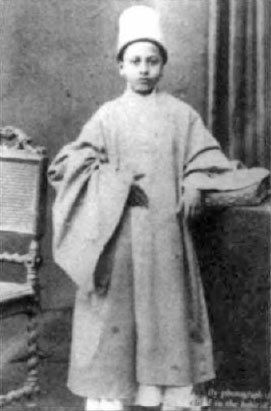 An elderly man who is chief dervish of the Sufi Moslem sect and a young boy who is a dervish in training in the early 1900s (from the book, The Lost Messiah: In Search of the Mystical Rabbi Sabbatai Sevi, by John Freely (Woodstock and New York: The Overlook Press, 2001) 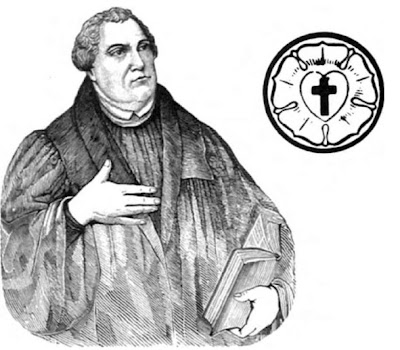 MARTIN Luther, priest who set in motion the Protestant Reformation, is shown in this picture from Christian News, a periodic Lutheran publication, giving a masonic sign.
The same Lutheran newspaper carries on its masthead (pg. 1) of every edition Luther’s seal, of Rosicrucian design. In fact, Luther was a Rosicrucian. Masonic signs and grips closely parallel those of Rosicrucians (Christian News, February 18, 2003, p. 1).

In an article on the internet entitled “Calvinism,” John Paul Jones quoted Masonic scholar Manly P. Hall, 33o, as affirming that Protestant reformer Martin Luther was a Rosicrucian initiate.
In the article, Luther’s official seal, middle, was depicted, along with the seal (far right) on Martin Luther’s ring. At far left is Luther’s seal with author Jones showing how if the petals of the flower are connected, an occult pentacle results. 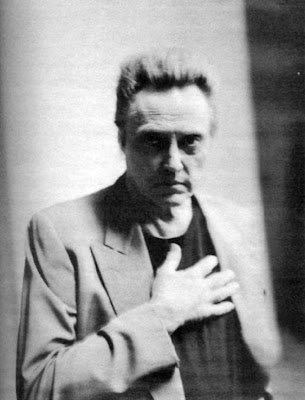 Christopher Walken, actor, seems to be favored by the elite. He is often cast in strange roles as deranged psychos, mob killers, etc.
Interview magazine devoted this entire page in its June 2004 edition, without caption and without comment or explanation. Obviously, the picture speaks for itself. 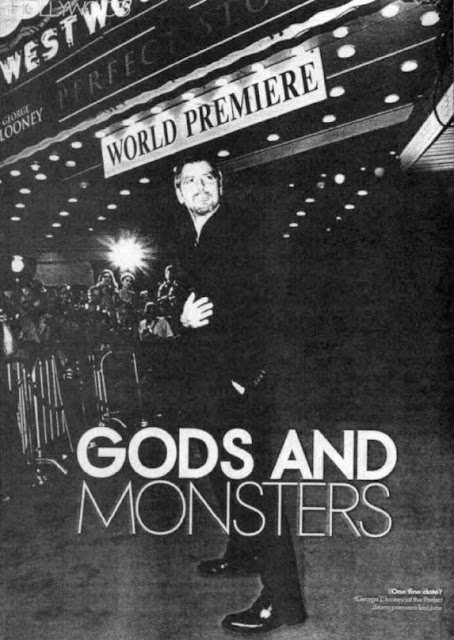 In an article, strangely enough, entitled “Gods and Monsters,” Hollywood actor George Clooney is seen presenting his sigil as he stands outside a theatre presenting the world premier of the film, A Perfect Storm. (Photo: Elle magazine, November 2000) 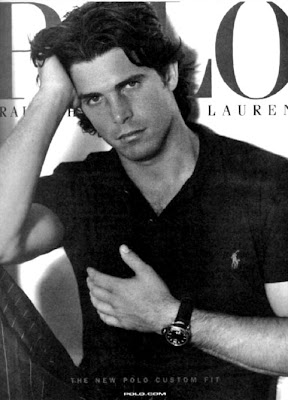 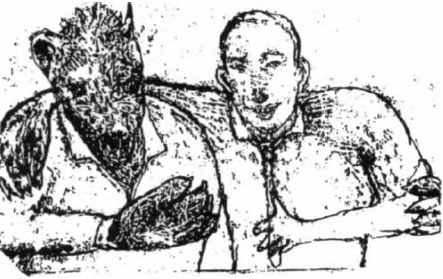 “How would you like to bite into a part-human bacon cheeseburger?” asks Michael Colgan, Ph.D., in the journal Nutrition A fitness (sic) (vol. 10. no. 1 & 2). In five years they’ll be at a burger stand near you, predicts the author. The U.S. Department of Agriculture’s research center in Beltsville, Md., has been inserting human genes into fertilized swine eggs, and a herd of “hupigs” now resides at the center. One goal of such research is to manufacture “spare parts for humans,” that is, genetically engineered organs to replace diseased human organs; another goal is to “design” animals for more efficient meat production.
The USDA creatures reportedly suffer from coordination so poor that they can barely walk. They also are subject to arthritis and lung and gut diseases. State and federal laws severely restrict access by journalists and the public, and photographs of the “hunimals” are forbidden.
In Michael Hoffman’s excellent book exposing the psychological and alchemical bases of the elite, Secret Societies and Psychological Warfare, the author included this news clipping about the horrors of inserting human genes into swine and other animals.

The phrase “Eating Raoul.” comes from a cult-classic film about people who enjoy eating human flesh.
Bookmark the permalink.