And he causeth all, both small and great, rich and poor, free and bond, to receive a mark in their right hand, or in their foreheads. ~ Revelation 13:16

Raise the right hand…extending the two fingers like a fork…then draw it back over the right shoulder and with a quick motion dart the extended fingers forward in a horizontal direction. It alludes to the penalty of gouging out the eyes of a traitor. ~ Second Sign of a Super-Excellent Master Mason Richardson’s Monitor of Freemasonry (p.91)

As we shall see, the llluminati worship deity by many names in many disguises. One such name and disguise is “Jahbuhlun.” In pursuit of their worship of this false God, Jahbuhlun, they have devised many rituals in which they employ “hidden” hand signs. In all the 33 degrees of Scottish Rite Freemasonry and in the rituals of the York Rite, the Order of Skull and Bones,the Ordo Templi Orientis, the Grand Orient Lodge of France, the Grand Lodge of Jerusalem, and on and on in almost all the secret societies and orders, handsigns, and handshakes are prominent.In Coil’s Masonic Encyclopedia we read:

“The hand is important in Freemasonry for the purpose of giving and receiving modes of recognition.”1  . 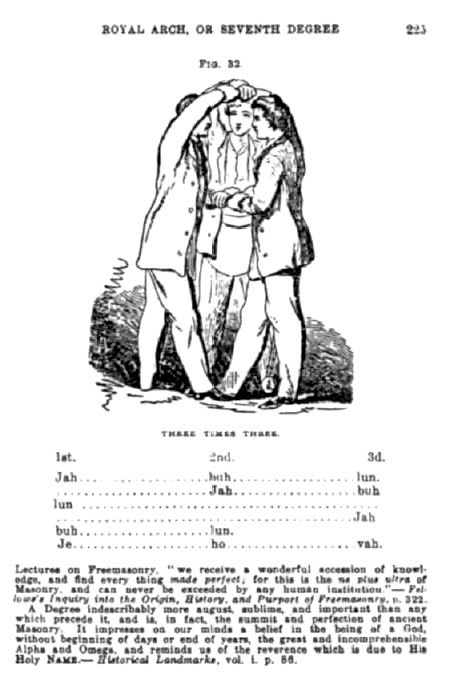 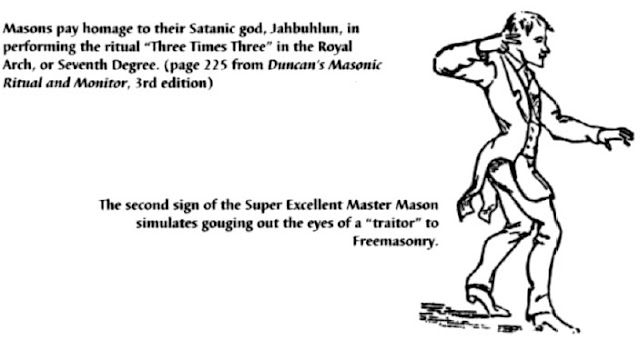 In J. C. Coopers’s An Illustrated Encyclopedia of Traditional Symbols 2, the author notes that hand signs include the following symbolic meanings:

Numerical hand signs from a Renaissance text on mathematics. Such usage often combines the teachings of numerology with the secret messages of hand communications’.
.

The International Secret Language
Is the occult hand sign, in its many forms and varieties, the international secret language of the Freemasons and other covert societies? Manfred Adler, in his German-language book, The Freemasons and The Vatican, says the answer to this question is, yes.3
He writes that according to the findings of a United States Senate Committee that investigated the Central Intelligence Agency (CIA),

“Ninety percent of the secret news is transmitted via the media, in particular the press, with the aid of coded texts and pictures.”4

Messages in the Media
Others, too, besides Adler, have noted the frequent use of hand signs in the media as signals of secret society insiders. Juan Maler, Argentine author and Masonic researcher, explains that the use of the hand sign is for the uninitiated a completely trivial and inconspicuous gesture.

“But for the members of the Secret Societies, the hand sign is used as a sign of recognition by those who are in a leading position or who have a mission to fulfill and usually appears with a relevant text.”5

“If one collects the photos of well-known personalities from the daily papers, then one possesses, in a very short time, a great number of conspicuous and ~ for those who understand the signs ~ also meaningful poses.”6

According to Rothkranz, the historic handshake between Helmut Kohl, then the Chancellor of West Germany, and Modrow, the head of the Communist East German regime which sealed the deal for German reunification was clearly a Masonic handshake. Rothkranz further notes that the historic handshake of the two elitists was shown at length on European television.7
A Symbol of Power
Why is the use of the hand considered to be so significant as a means of concealed communications by occultists? The Herder Dictionary of Symbols states that the hand is “a symbol of activity and power.” It notes that finding oneself “in the hands of a ruler or God means being in that person’s power, but also standing under that person’s protection.”8
The dictionary goes on to say that the “shaking or offering of the hand is a sign of friendly openers, devotion or forgiveness.” But a closed hand signifies secrets or keeping silent. Other uses of hand signs are to indicate fear, threats, devotion, admiration, and argument.The Herder Dictionary explains, too, that, “In antiquity, covered or veiled hands were generally customary when one approached high dignitaries.” Hands with palms resting on one’s knees express deep concentration and reflection.9

The hand can also be used as a threat to any would-be traitors or betrayer of the Illuminist cause. In the authoritative Richardson’s Monitor of Freemasonry we find an example of this in the second sign of the Super Excellent Master Mason. The sign consists of raising the right hand, making the two first fingers like a fork, and simulating the gouging out of the eyes of a “traitor.”

On the Other Hand…
There is a great symbolic difference between the use of the left and right hands. The right hand is said to be the hand of blessing, a good and positive influence, and those who use it in the occult world are known as those on the “right-handed path.” This is considered “white magic.”Those on the left-handed path, however, are practitioners of “black magic.” Full-fledged Satanists are typically of the left-handed path, though, in reality, it does not matter to the devil which hand is used!

The left hand is ever considered the sinister hand. It is associated with words like diabolical, witchlike, clever, deceptive, sly, cunning, evil, wrong, backward, and perverse. The evil eye is said to be the left eye. Some early Christians (for example, the writer of the apocryphic Gospel of Nicodemus) taught that of the two thieves crucified next to Jesus, the one at his left side rejected truth and was consigned to hell. 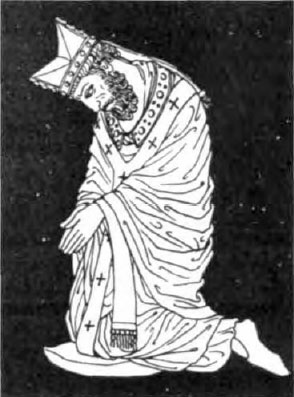 An odd, old drawing of a priest with hands in prayer, but aimed downwards toward Satan! 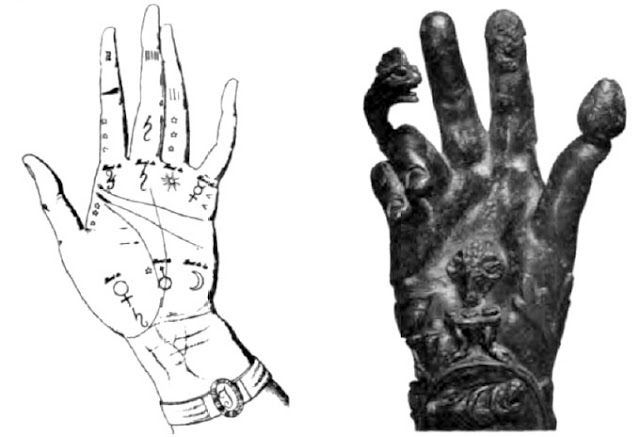 At Left: Josephine Bonaparte’s Palm from Mlle Le Normand’s Les Memoires historiques et secrets de l’lmperatrice Josephine, Paris, 1827.
At Right: The Sabazios Hand. Bronze symbol of the syncretic Jewish mystery cult of Sabazios in Asia Minor. Circa First Century, C.E. (Collection of the British Museum)Witches throughout history have danced in ritual circles to the left, that is, counterclockwise. Druid priests do likewise as they dance and march around the holy stone at Tara, Shrine of Mother Earth. To blaspheme God, some Satanists and witches derive pleasure in giving the sign of the cross with their left hands.

But while witches and deep occultists are aware of the sinister nature and meaning of the left hand symbolically, one of the foremost Masonic authorities evidently has a more favorable view. Professor James Curl, author of the reference book, The Art and Architecture of Freemasonry, writes that, “The left hand is the symbol of equity.”10

In other words the symbol of justice and fairness. Strange, indeed, unless one elevates the devil to the virtuous level of one who serves justice and brings equity or equality. But then, why would a Masonic authority think otherwise of the Lodge’s true Grand Master, the Prince of the Power of the Air, aka Lucifer?
An Indicator of Attitude
According to most reference books of the occult, the positioning of the hand on a  particular part of the body indicates one’s mental attitude and inner meaning. A hand placed on the breast indicates a tender, loyal or sympathetic attitude. Placed on the neck, the hand denotes sacrifice and penalty, while the joining of hands signifies mystic marriage and fidelity. 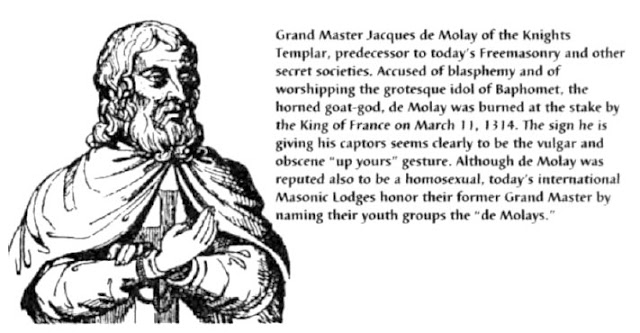 Three or more people linking hands signifies the joining of forces or energy, and is expressive of a virile fraternity and of solidarity in the face of danger.The authors of A Dictionary of Symbols note that the hand expresses “ideas of action, as well as those of power and dominion.” They say it is also a sign of royalty. The Jewish Kabbala (or Cabala) teaches that the left hand is the “hand of punishment,” while the righthand is the “hand of blessing.”11

The same reference guide explains that the word “manifestation” derives from the same root as “manus,” the Latin word for hand. “What is manifest can be held in, or grasped by, the hand.”12

The Fingers Can Be Revealing
The position of a specific finger, or fingers, of a hand may also denote great importance. Sammy Davis, Jr., the black entertainer and member of the infamous Sinatra “rat pack,” confessed in his autobiography, Yes, I can, to being a Satan worshipper. The talented singer/dancer said that as a Satanist he painted the fingernail of his left-hand “pinkie” finger ebony black as a sign. “The chicks loved it,” said Davis, “and found it really a sexual turn-on.”
Some Islamic imams (teachers) preach that the hand of Fatima, a revered daughter of Mohammed, represents the summation of the whole religion of Islam, and that Fatima’s index finger points heavenward to Allah.A hand with finger pointed to or touching the lip indicates, “Be silent.” A finger touching or pointing to the head signifies “intellect or wisdom.”

The pictures and illustrations in this section and the immediately following sections give evidence of the importance the Illuminati minions give to the use of hands, either in handshakes and grips, or in various poses. The old phrase, “a show of hands” certainly has a multitude of meanings to the members of secret societies.

Open to Interpretation?
A word of caution and advice is in order, however. Although I have used the best reference guides and the best knowledge obtainable from myriad investigative sources, it is sometimes very difficult to judge and evaluate a particular handshake, hand sign, pose or grip. For one thing, even though a Masonic reference book or occult textbook may clearly spell out the specifications for a type of grip or sign, the people who practice it are not always so precise.I noted in a 20-year career in the U.S. Air Force that while the military manuals and guidebooks clearly explain how to perform a hand salute, not all in uniform complied. Some high-ranking officers render a shoddy, confusing, lackadaisical salute while others give a snappy, precise salute exactly as the textbook prescribes. One can see a hundred different types of salutes at a typical Air Force Base exchanged on a given day, each a little bit different in one aspect or the other. And, of course, if you compare the way the U.S. military salutes with the salute of a British Sergeant Major, the difference is striking, indeed.

Still, even taking into account the human factor, it is possible to identify many of the hand signs and poses given and used by the elite. Check out my selection on the pages that follow and see if you agree. 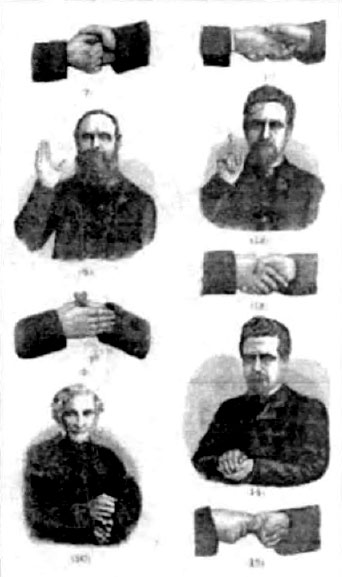 Many secret orders and societiesdisplay and use secret handshakes and signs. In Wales (Great Britain) the Order of the True Ivorites was established in 1836 and prospered for many years. Some believe two lodges of Ivorites still exist today. Pictured here are some of their secret signs and handshakes.
Bookmark the permalink.