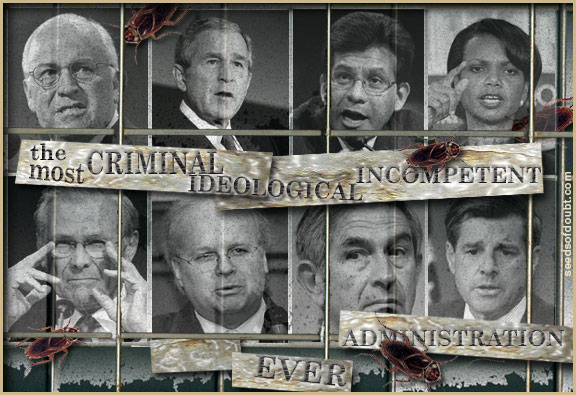 Mathaba
May 5, 2012
A solid case for the prosecution of Bush, Blair, Rumsfeld, Cheney, their legal counsel and others, for war crimes, crimes against the peace, torture, and crimes against humanity has been established at the Kuala Lumpur War Crimes Tribunal with a guilty verdict on day 5 of the third major session of the Tribunal.
The Tribunal recommends to the War Crimes Commission to give the widest international publicity to this conviction and grant of reparations, as these are universal crimes for which there is a responsibility upon nations to institute prosecutions if any of these Accused persons may enter their jurisdictions. Global Research Director Michel Chossudovsky is a member of the Kuala Lumpur War Crimes Commission and was present throughout the Tribunal hearings.
KUALA LUMPUR, 11 May 2012 (mathaba)
The five-panel tribunal unanimously delivered a guilty verdict against former United States President George W. Bush and his associates at the Kuala Lumpur War Crimes Tribunal hearing that had started on Monday, May 7th.
On the charge of Crime of Torture and War Crimes, the tribunal finds the accused persons

guilty as charged and convicted as war criminals for Torture and Cruel, Inhumane and Degrading Treatment of the Complainant War Crime Victims. 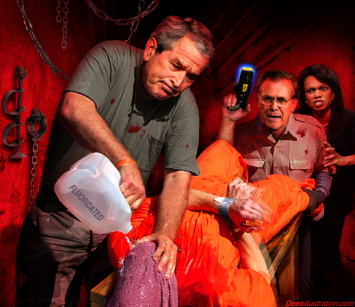 Earlier in the week, the tribunal heard the testimonies of three witnesses namely Abbas Abid, Moazzam Begg and Jameelah Hameedi. They related the horrific tortures they had faced during their incarceration. The tribunal also heard two other Statutory Declarations of Iraqi citizen Ali Shalal and Rhuhel Ahmed, a British citizen.
Testimony showed that Abbas Abid, a 48-year-old chief engineer in the Science and Technology Ministry had his fingernails removed by pliers. Ali Shalal was attached with bare electrical wires and electrocuted and hung from the wall. Moazzam Begg was beaten and put in solitary confinement. Jameelah was almost nude and humiliated, used as a human shield whilst being transported by helicopter. All these witnesses have residual injuries till today.
These witnesses were taken prisoners and held in prisons in Afghanistan (Bagram), in Iraq (Abu Gharib, Baghdad International Airport) and two of them namely Moazzam Begg and Rhuhel Ahmed were transported to Guantanamo Bay.
In a submission that lasted a day, the prosecution showed in an in depth submission how the decision-makers at the highest level President Bush, Vice-President Cheney, Secretary of Defence Rumsfeld, aided and abetted by the lawyers and the other commanders and CIA officials ~ all acted in concert. Torture was systematically applied and became an accepted norm.
According to the prosecution, the testimony of all the witnesses shows a sustained perpetration of brutal, barbaric, cruel and dehumanizing course of conduct against them. These acts of crimes were applied cumulatively to inflict the worst possible pain and suffering.
After hearing the defence of the Amicus Curiae and the subsequent rebuttal the prosecution, the tribunal ruled unanimously that there was a prima facie case made out by the prosecution.
After hours of deliberation, the tribunal, in the verdict that was read out by the president of the tribunal Tan Sri Dato Lamin bin Haji Mohd Yunus Lamin, found that the prosecution had established beyond a reasonable doubt that the accused persons, former President George Bush and his co-conspirators engaged in a web of instructions, memos, directives, legal advice and action that established a common plan and purpose, joint enterprise and/or conspiracy to commit the crimes of Torture and War Crimes, including and not limited to a common plan and purpose to commit the following crimes in relation to the “War on Terror” and the wars launched by the U.S. and others in Afghanistan and Iraq:

The Tribunal finds that the prosecution has established beyond a reasonable doubt that the Accused persons are individually and jointly liable for all crimes committed in pursuit of their common plan and purpose under principles established by Article 6 of the Charter of the International Military Tribunal (the Nuremberg Charter), which states, inter alia, “Leaders, organizers, instigators and accomplices participating in the formulation or execution of a common plan or conspiracy to commit war crimes are responsible for all acts performed by any person in execution of such plan.”
The Principles of the Nuremberg Charter and the Nuremberg Decision have been adopted as customary international law by the United Nations. The government of the United States is subject to customary international law and to the Principles of the Nuremburg Charter and the Nuremburg Decision.
The Tribunal finds that the prosecution has proven beyond reasonable doubt that the accused lawyers, gave ‘advice’ that “the Geneva Conventions did not apply (to suspected al Qaeda and Taliban detainees); that there was no torture occurring within the meaning of the Torture Convention, and that enhanced interrogations techniques, (constituting cruel, inhumane, and degrading treatment,) were permissible.”

The prosecution has also established beyond a reasonable doubt that the accused lawyers “knew full well their advice was being sought to be acted upon, and in fact was acted upon, and such advice paved the way for violations of international law, the Geneva Conventions and the Torture Convention.”
The accused lawyers’ advice was binding on the accused Bush, Rumsfeld and Cheney, each of whom relied on the accused lawyers’ advice. Others, such as CIA Director George Tenet and Diane Beaver, officer in charge at Guantanamo, relied on the accused lawyers’ advice. The prosecution had established beyond a reasonable doubt that the accused lawyers are criminally liable for their acts, and for participating in a joint criminal enterprise.
The president read that the Tribunal orders that reparations commensurate with the irreparable harm and injury, pain and suffering undergone by the Complainant War Crime Victims be paid to the Complainant War Crime Victims. While it is constantly mindful of its stature as merely a tribunal of conscience with no real power of enforcement, the Tribunal finds that the witnesses in this case are entitled ex justitia to the payment of reparations by the 8 convicted persons and their government.
It is the Tribunal’s hope that armed with the findings of this Tribunal, the witnesses will, in the near future, find a state or an international judicial entity able and willing to exercise jurisdiction and to enforce the verdict of this Tribunal against the 8 convicted persons and their government. The Tribunal’s award of reparations shall be submitted to the War Crimes Commission to facilitate the determination and collection of reparations by the Complainant War Crime Victims.
President Lamin read,

“As a tribunal of conscience, the Tribunal is fully aware that its verdict is merely declaratory in nature.
The tribunal has no power of enforcement, no power to impose any custodial sentence on any one or more of the 8 convicted persons. What we can do, under Article 31 of Chapter VI of Part 2 of the Charter is to recommend to the Kuala Lumpur War Crimes Commission to submit this finding of conviction by the Tribunal, together with a record of these proceedings, to the Chief Prosecutor of the International Criminal Court, as well as the United Nations and the Security Council.
The Tribunal also recommends to the Kuala Lumpur War Crimes Commission that the names of all the 8 convicted persons be entered and included in the Commission’s Register of War Criminals and be publicized accordingly.
The Tribunal recommends to the War Crimes Commission to give the widest international publicity to this conviction and grant of reparations, as these are universal crimes for which there is a responsibility upon nations to institute prosecutions if any of these Accused persons may enter their jurisdictions.