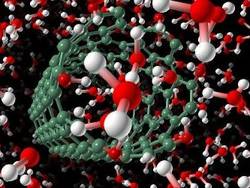 Is it too logical to say just don’t make things toxic in the first place?
By Rady Ananda
Activist Post
June 29, 2012

To clean up its drugs that are contaminated with genotoxic ingredients (which are also carcinogenic), Big Pharma may deploy lab-created, nanosized, polymer-based scavengers.But is the cure any safer?

A variety of chemical compounds, intermediates, and reagents are used during the process of synthesizing active pharmaceutical ingredients (APIs). Some of these chemicals, intermediates, and reagents, as well as byproducts of synthetic processes, can have toxic properties and be present as impurities at low levels in the API or final drug formulation.
The kinetics of acrolein scavenging in the presence of the API iodixanol and the scavenging capacity of resins were demonstrated in this paper.

They found a nanopolymer so efficient it cleans up 97.8% of acrolein without eating the active pharmaceutical components.YUM ~ DRUGS WITH NANOBOTS.

“Therefore, exposure to even low levels of such impurities present in the final API may be of significant toxicological concern.”

Research began in earnest after the European Medicines Agency issued its Guideline on the Limits of Genotoxic Impuritiesin 2006, which set the limit at 1.5m/day under the Threshold of Toxicological Concern (TTC):

A TTC value of 1.5 μg/day intake of a genotoxic impurity is considered to be associated with an acceptable risk (excess cancer risk of <1 in 100,000 over a lifetime) for most pharmaceuticals.
The US Food and Drug Administration followed suit in 2008.

Some nanopolymer scavengers are more or less selective in their activity, the team discovered, based on polymer structure. “Less cross-linked ones showed an ‘undesired high level of nonspecific binding to the API’,” meaning they readily eat the good properties of the drugs, and who knows what else.In a 2008 study, mesoporous silica nanoparticles (MSNs) were also found to “restore damaged cell membranes and ameilorate abnormal mitochondrial behavior induced by” genotoxins (like acrolein). “MSNs modified with drug/polymer constructs provide significant neuroprotection to cells damaged by a usually lethal exposure to acrolein.”

Safety questions for nano-agents remain, however. Because of the size, a whole new set of health hazards are raised. Does this technology trade one set of hazards for another?

Last December, a group led by the International Center for Technology Assessment filed suit against the FDA over untested, unlabeled nanomaterials added to our food, cosmetics and drug supplies. Represented by the Center for Food Safety (CFS), the litigation forced the FDA into making some changes to its nanotech policy.

“FDA acknowledged that there are differences between nanomaterials and their bulk counterparts, and that nanomaterials have potential new risks and may require new testing. However, the agency declined to enact mandatory regulations at this time.”

Nanotechnology is a powerful new set of technologies for observing, taking apart and reconstructing nature at the atomic and molecular level.
Despite already being commercially available, nanomaterials in sunscreens, cosmetics, foods and food contact substances are unlabeled and largely untested for their human health effects.
Existing research raises red flags, indicating that nanomaterials have the ability to enter the bloodstream through contact with the skin, ingestion and inhalation, as well as move in the natural environment once discarded.

Not only that, nanosize particles easily cross the blood-brain barrier and placental walls.
From my January piece:

That small of a size makes nanoparticles capable of crossing the blood-brain barrier noted food research scientist Ellin Doyle. In 2006, she published a literature review on nanotechnology advising, ‘Nanoparticles are readily taken up by many types of cells in vitro and are expected to cross the blood-brain barrier that excludes many substances that might harm the brain.’
In addition to several studies showing nanosize-induced harm cited in ICTA’s 2006 petition, another group, ETC, listed ten studies from 1997 through early 2004 that showed DNA and brain damage, lung dysfunction, and bioaccumulation (whereby earthworms and other creatures absorb, inhale or ingest the nanoparticles and pass them up the food chain).
A 2012 study shows that even nanoparticles pass up the food chain to fish, dysfunctionally affecting behavior and fat metabolism.
This is especially significant as nanopollution grows with the release of thousands of pounds of nanomaterials into the environment, notes Friends of the Earth in its 2006 report, Nanomaterials, sunscreens and cosmetics. (More studies can be found at this companion FOE report.)
ETC also pointed to studies showing that nanoparticles can break down in the body causing metal poisoning, and can cross the placenta from mother to unborn fetus.
A 2010 British study confirmed that anything smaller than 100 nm poses even greater health risks because it can “access all areas of the body” and can even penetrate the nucleus of cells where DNA is located.
Stronger than steel, carbon nanotubes look and act like asbestos, which causes lung cancer.
This FOE report also cites reduced kidney growth in lab animals exposed to nanomaterials.

Though the ICTA lawsuit demanded a recall until nanomaterials are labeled and their effects tested for safety, the only real change the six-year fight made is that the FDA now admits that size matters. After pushing the issue this long, perhaps a different legal strategy is now needed to protect the public from dangerous substances the FDA is not willing to control.

Meanwhile, we can expect some industry-sponsored toxicity studies on lab-created, nanosized, polymer-based scavengers used to clean up genotoxins in pharmaceuticals that we will ingest.

We can also expect, like with genetic engineering and nanofoods, no US federal agency will require labeling.

Meanwhile, you can support the movement to label GMOs by wearing the slogan. Shirt sales also support my work.

Rady Ananda is the creator of Food Freedom News,whose work has appeared in several online and print publications, including four books. She holds a B.S. in Natural Resources from The Ohio State University’s School of Agriculture (2003). She is LinkedIn and tweets her own work from @RadysRant; while tweeting both hers and others’ from @geobear7. Support independent media by donating here.,