By creoleguy32 | February 10, 2013 - 8:07 am |February 10, 2013 Celebrity Illuminati, Occult Symbolism
I guess the heat from exposing Beyonce & the NFL falls on me yet again.  This website, which I have created, is evil.  It is not good for people to read.  After each post, I am waking up with scratches all over my body. 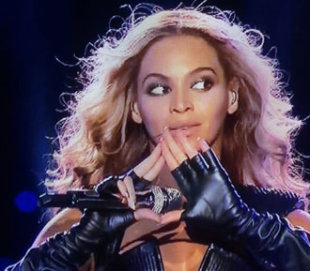 O.k. This is what happened in the New Orleans Superdome & I really had this post written days ago but thought twice about publishing it.  I think Alex Jones did the best but you have be to a very well-trained student of deep magick to decode the meanings of these rituals & even Beyonce didnt notice certain things because while Beyonce did one ritual, for a short time during her Destiny Childs performance, there was a larger ritual, which she wasnt aware of taking place.
The Illuminati is getting so hard core and “insider” that it is just to point that one has to know what they are looking at.  When I watch these rituals, I don’t simply see the symbols and hear the music but there’s an actual language being spoken.  Like ancient Egyptian Hieroglyphics, the symbols aren’t pretty little pictures that one puts together like a puzzle but instead the symbols project a spoken language into the mind of the viewer, just as clear as if someone was standing up in a University Class Hall and giving a lecture.
The reason why the ancients used symbols is because the spoken language is a limitation of thought. What would take an entire chapter of a book to explain by writing words, can be summed up with the use of symbols.
Lucifer has the world under a spell & for some strange reason people, since the beginning of time, have always thought that Lucifer was someone that could be bargained with.
Decade after decade, since the 1900′s in the U.S., we see these desperate peasants getting promised fame & political fortune, if they would only put this or that policy into place.  We got The Federal Reserve through this weakness & corruption. 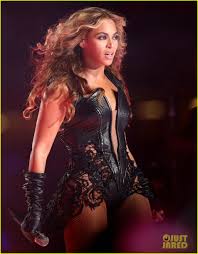 In Beyonce’s Half Time Show, we see many inverted Pyramids, which means a “die off”. We see the opening with certain people being allowed to rush the stage and be near Beyonce, while she is performing.
Unlike the Madonna’s Half Time Show where we saw the audience participating with the holding up of lights, in Beyonce’s half time show, we only see Beyonce and these mindless followers, who are holding up the pyramid sign and feeling like the luckiest people alive because they were allowed to be near the “Beyonce”.
She is not a member of the public, she isnt representing a Freemason or member of the so called ”super political/media class” but instead Beyonce is being used to represent the top level Illuminati Elite in this ritual.
.
What this “super class” of audience break off, which were allowed to rush the stage at the start of the ritual, doesn’t realize is that while they hold up the Pyramid and hang on to this hope of being included in this New World Order of Lucifer, the pyramids coming down from the Super dome and hitting the stage is inverted.  Go back and watch the light formation at the start of Beyonce’s Ritual.
What they also fail to realize is that while they may feel special and a part of the “super class” is that Beyonce is at one point, standing in the middle of an occult circle, that is made up of flames.
An occult circle of flames, is basically used in occult to protect the magician that has called upon Lucifer, which means that anything within the circle is protected, while these demonic entities are allowed to unleash their evil onto anything outside the circle or on a direct target that is set by the magician.
Notice that Beyonce is in the circle (with Kelly Rowland and Michelle) and the supposedly “super class” is not within this circle. 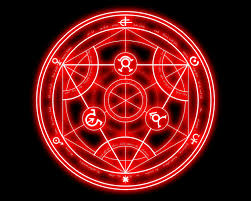 What does this mean?  It means just what I said it means; which is that hardly no one from this “super class” is standing in this circle.  The so called “super class” that serves Lucifer are next up on his list for target.
So, for all of you people in politics, CIA, media, religious fields, academic/technology fields and Hollywood that think your phone will ring & that Lucifer will usher you off into secret under ground bases as he outlines to you a bio-weapon or nuclear holocaust? Well, think again. 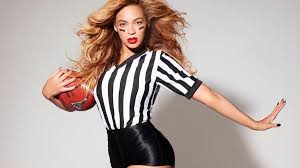 The Pyramid is inverted via the lighting arrangement.  The public has disappeared into the tip of the pyramid, which is now at the bottom, while the wider base of the pyramid is now at the top.  Beyonce is the “elite” protected in the magical circle, and the wannabe elites or supposedly “super class” are not allowed within this circle but are instead left unprotected, along with oohing, ahhing and holding up a now irrelevant pyramid, from an era (present day), that is now being made obsolete in the New World Order.
We even see Beyonce, the metaphor used to represent the top level elites aka The Illuminati, multiplying and re-populating as the lights go out on the “Super Class” & general public. There is even the Black & White Freemason Back Drop. 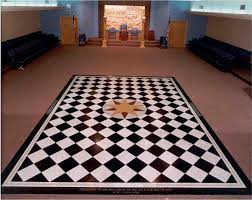 All of the pyramid hand signs and Freemason bullshit is a some what fake out. They have absolutely nothing to do with the actually encrypted occult ritual.
The Super dome was plunged into darkness for 33 minutes by Beyonce and all I hear are these 33rd Degree Freemasons, that work in the media, entertainment, government & athletic fields appearing to think that this was some type of compliment and a recognition of power by the REAL elites. Ummm….oh boy.  How sad are you people? How pathetic? How misled?  How naive?
So, what is this ritual calling for? An inverted pyramid of lights, the audience unseen and left in darkness, with about 100 chosen people left drooling at the stage & holding up a pyramid sign as Beyonce reflects the pyramid sign back; while being protected from those adoring fans in a magical circle made up of flames?  NUCLEAR WAR! 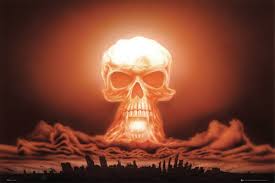 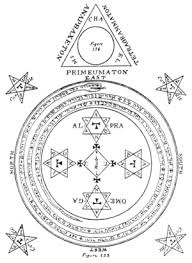