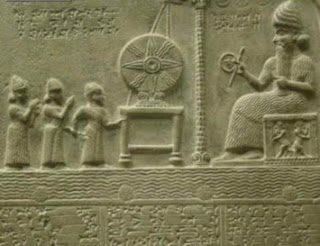 In the following show on Coast 2 Coast AM, author Marshall Klarfeld shares his contention that the human race was created by genetic engineering technology nearly a quarter of a million years ago. His research confirms the work of scholar Zecharia Sitchin, who concluded that Earth was visited by an ET race called the Annunaki. Klarfeld cited four forms of ancient evidence for this theory: text or cuneiform, cylinder seals, sculptures, and structures.

Structures such as the Egyptian pyramids and Stonehenge could not have been created by the local folk, and suggest some type of outside assistance, he argued. The pyramids were built as navigation devices for the Annunaki’s spaceships, he believes, and further, the giant stones in Baalbek, Lebanon could have been their launching pad.

The Annunaki first came here 450,000 years ago, arriving from their planet Niburu, he detailed. They built their own cities, but eventually decided to genetically alter homo erectus, so the beings would be more suitable as their workers, said Klarfeld. This was accomplished by taking the eggs from the females and transferring them to the Annunaki female, whose offspring resulted in homo sapiens, he explained.
References :