A SAD DAY FOR JUSTICE IN CANADA 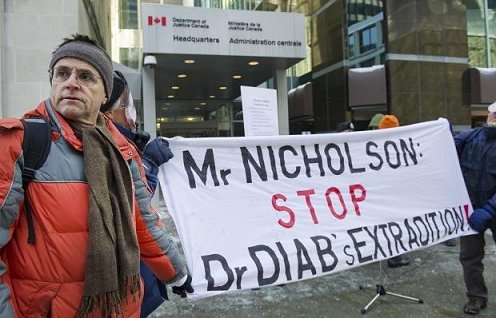 We areasking you to raise your voice!

Yaya Canada
April 7, 2012
As you may beaware, Justice Minister Rob Nicholson recently decided to surrender Dr. Hassan Diab toextradition. We are asking you to raise your voice against this unjust decisionby writing to your local (or national) newspaper. In your letter, pleaseconsider the following points: ►It is shocking that France has notyet charged Hassan or decided whether to put him on trial, meaning Hassan maylanguish in pre-trial detention for years on mere suspicion whilea 32-year-old investigation drags on. ►It is unacceptable that MinisterNicholson did not seek assurances that France will not use anonymous andunchallengeable intelligence ~ that may be the product oftorture ~ as trial “evidence” against Hassan. ►Minister Nicholson should havesought assurances that Hassan would be allowed to effectively challenge theFrench handwriting reports, which were found by international experts to bedeeply flawed. ►Minister Nicholson should havesought assurances that Hassan would be allowed to present exonerating evidence,such as the fact that his palm and finger prints do not match those of thesuspect.

►The standard of evidence forextradition from Canada is outrageously low and does notmeet the standards for fair trial. The case against Hassan would be tossed outof court if he were tried in Canada. ►It is unacceptable that Canada’sextradition treaty with France is one-sided, in that France does not extradite its own citizens.

Short letters (approximately 100 words) have the best chance of gettingpublished. Be sure to include your name, postal address, and daytime phonenumber, and write “letter to the editor” in your subject line.

On April 4, 2012, Justice Minister Nicholson signed an order surrenderingHassan to France, despite recent information that Hassan is wanted in Francefor mere questioning and that no decision has been made about whether to tryhim or not.

This deeply disappointing decision highlights problems with the extraditionprocess in Canada which has stripped Hassan of his rights as a citizen anddeprived him of his liberty.

Mr. Donald Bayne, Hassan’s lawyer, pointed out that a Canadian citizen cannotbe surrendered to a foreign country for mere questioning, where he may languishin jail for years in pre-trial detention. The foreign country must charge aperson and decide to put him on trial before making an extradition request.

Mr. Bayne also pointed out that the case against Dr. Diab is anchored inunsourced and anonymous intelligence assertions that cannot be challenged incourt.  Human Rights Watch and other human rights organizations havecriticized France for running unfair trials based on intelligence that may bethe product of torture.

In making his surrender decision, Minister Nicholson stated that he isinterpreting Canada’s Extradition Act in a “flexible manner”. He refused toseek assurances from France that intelligence would not be used as evidenceagainst Hassan if he were put on trial, even though the Supreme Court ofCanada, as well as the report from the Arar Inquiry, have highlighted thedangers of relying on intelligence as evidence and the risk that this couldlead to wrongful conviction.

The Minister also refused to seek assurances that two discredited handwritingreports that relied on samples that were not written by Hassan would not beused at trial. He also refused to seek assurances that Hassan would be affordedthe opportunity to challenge a third handwriting report that the extraditionjudge described as “very problematic”, “very confusing”, “very convoluted”, andwith “suspect conclusions”.

The Minister’s decision sends the message that a Canadian can be forciblyshipped to a foreign country and allowed to languish for years in pre-trialdetention based on mere suspicion, and that Canada will not even seekassurances that a fair trial be held.

Web: http://www.justiceforhassandiab.org
Email: diabsupport ~at ~ gmail ~ dot ~ com
Facebook:
http://www.facebook.com/group.php?gid=159101029758
Twitter:
http://twitter.com/friendsofhdiab
SAMPLE LETTER
Here is a sample letter to RobNicholson. This same letter can also be adapted for newspapers.
Hon. Rob Nicholson
Minister of Justice
House of Commons
Ottawa, Ontario K1A 0A6
Dear Minister Nicholson,
I am writing to you regarding thecase of Dr. Hassan Diab who is facing extradition to France.
It is extremely distressing andshocking that a Canadian can lose his liberty and be extradited to a foreigncountry based on wholly unreliable evidence.
I strongly urge you to stop the extraditionproceedings against Dr. Diab and carefully review Canada’s unfair extraditionlaw. The standard for extradition is so low that Canada hands its citizens overto other countries based on evidence that would not be accepted in a Canadiancriminal court. Moreover, France does not extradite its own citizens, whichmakes the extradition treaty between Canada and France dangerously unbalanced.
I find it very troubling that onJune 6, 2011, Justice Robert Maranger decided to commit Hassan to extraditiondespite the totally unreliable evidence presented by France. The judge basedhis decision solely on handwriting analysis that the judge himself described as“problematic”, “very confusing”, and with “conclusions that are suspect”.
The extradition process shows noregard for Dr. Diab’s Charter Rights and has caused him and his family enormoushardship. Dr. Diab lost his university employment, was twice taken intocustody, is subjected to very strict bail conditions, and has to pay for theGPS monitoring device he is required to wear at all times.
If extradited to France, Hassan willbe forcibly separated from his family and will be held in pretrial detentionfor months or even years. Hassan will not receive a fair trial in France’s counter-terrorismcourts.
These courts place severe limitations on the ability of the defence topresent evidence, and allow the use of unsourced secret intelligence that maybe the product of torture. Human Rights Watch has documented human rights violationsby France’s counter-terrorism judiciary in two reports entitled “Preempting Justice”(2008) and “No Questions Asked” (2010).
Minister Nicholson, surrendering Dr.Hassan Diab to France will shock the conscience of Canadians and result in a miscarriageof justice.
I strongly urge you not to sign thesurrender order.
Sincerely,
Name
Address