99 Problems… But Oil Ain’t One of Them

America has some serious problems. 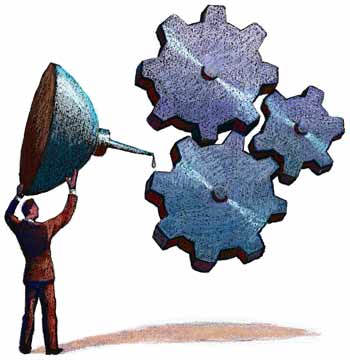 Despite the fact that the United States spends $15,171 per student—more than any other country in the world—American students consistently trail their foreign counterparts, ranking 23rd in science and 31st in math.

The US also spends more than twice as much on health care per capita than the average developed country, yet underperforms most of the developed world in infant mortality and life expectancy. The US rate of premature births, for example, resembles that of sub-Saharan Africa, rather than a First World country. And if you think Obamacare is going to change that… I have a bridge to sell you.

K Street has a bigger influence on American politics now than Main Street, and economic key players like the TBTF banks, the insurance industry, etc., have nearly carte blanche to act in whichever way they see fit, with no negative consequences.

The US government is spending more money to spy on Americans and foreigners than ever before. Since August 2011, the NSA has recorded 1.8 billion phone calls per day (!)—with the goal of creating a metadata repository capable of taking in 20 billion “record events” daily.

More than one in seven Americans are on the Supplemental Nutrition Assistance Program (SNAP)—better known as “food stamps.”

But there is one problem that America doesn’t have—getting oil out of the ground.

After decades of declining domestic production, US producers finally figured out how to extract oil from difficult locations, whether that’s the shale formations or deposits under thousands of feet of water… and they’ve kept going ever since.

Today, the US is one of the few countries in the world that have seen double-digit growth in oil production over the past five years. This presents some great investment opportunities for the discerning investor.

The oil industry’s new treasure trove, the legendary Bakken formation, has turned formerly sleepy North Dakota into one of the hottest places in the United States. According to the Minneapolis Fed, “the Bakken oil boom is five times larger than the oil boom in the 1980s.”

Unemployment in the state with 2.7% is the lowest in the nation; in Dickinson, ND, even the local McDonald’s offers a $300 signing bonus to new hires, on top of an hourly wage of $15.

Here are some more fun facts, courtesy of the Fiscal Times:

–There are now an estimated 40,856 oil industry jobs in North Dakota, plus an additional 18,000 jobs supporting the industry. Between 2010 and 2012, Williston, ND, a town with a population of only 16,000, produced 14,000 new jobs.
–While other US states are struggling, some even being close to bankruptcy, North Dakota now has a billion-dollar budget surplus.
–The number of ND taxpayers reporting income of more than $1 million nearly tripled between 2005 and 2011—and that in a state with a total population of 700,000.
–The low population numbers will soon be a thing of the past, though: the population in the oil-producing region is expected to climb over 50% in the next 20 years.
–2,000-3,000 new housing units are built every year in Williston, ND, but it’s still not enough to fill the need. Rents have gone from a pre-boom $350 per month for a two-bedroom apartment to over $2,000 today… the equivalent of a studio apartment in New York’s rich Upper East Side.

The entire “energy map” of the United States has been altered by the Bakken: the Midwest, rather than the Gulf, is now the go-to area.

Though the rest of the world is trying to catch up, the United States has a huge head start over everyone else. The advancements it holds in hydraulic fracturing and horizontal drilling had been built on the back of one and a half centuries of oil and gas exploration and the thousands of firms that service the drillers and producers.

So far, other countries simply lack the experience and the infrastructure to even compete.

In fact, American companies have spent 50% more money on energy research and development (R&D) than companies anywhere else in the world. What’s more, they are exporting this technology across the globe, enabling other countries to unlock their own hydrocarbon reserves.

Obviously, they’re not doing this out of philanthropy; there is a lot of money to be made by licensing out their technology and “lending a helping hand.”

The biggest winners, hands down, are the energy-service companies that already know how to get oil out of US fields… and that apply these methods to other fields worldwide to boost production and reduce decline rates.

As the easy-to-extract oil depletes in the US and abroad, oil companies and governments are beginning to look at past-producing oil fields. As it turns out, the producing wells drilled in the 1970s and ’80s weren’t very good at getting every drop of oil out of the ground. With modern technology, however, it is now possible to access previously out-of-reach deposits. Even a mere 5% or 10% improvement in oil recovery rates means billions, if not trillions, more in revenues.

Rediscovering previously overlooked fields was what started the boom in the Bakken as well as the Eagle Ford formations… and other countries are beginning to catch on.

We believe that this new trend of applying new technologies to old oil fields is not a fad but here to stay. That’s why our energy portfolios are stocked with companies doing just that in Europe, Oceania, and even South America.

As it’s becoming clear that the era of cheap, light, sweet crude is nearing its end, the industry is adapting to this new reality of oil becoming more difficult to access. And if investors want to make profits in today’s energy markets, they, too, must learn to adapt.