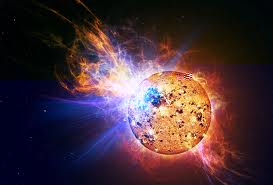 Whilst a solar flare from out Sun, aimed directly at us, could cause secondary problems such as satellite damage and injury to unprotected astronauts and blackouts, the flare itself is not powerful enough to destroy Earth, certainly not in 2012. the far future when the Sun begins to run out of fuel and swell our magnetosphere, ionosphere and thick atmosphere below.
“Killer” solar flares have been observed on other stars. In 2006, NASA’s Swift observatory saw the largest stellar flare ever observed 135 light-years away. an energy of 50 million trillion atomic bombs, the II Pegasi flare will have wiped out most life on Earth if our Sun fired X-rays from a flare of that energy at us. However, our Sun is not II Pegasi. II Pegasi is a violent red giant star with a binary partner in a very close orbit. Gravitational interaction with its binary partner and the fact II Pegasi is a red giant is the root cause behind this energetic flare event.
Doomsayers point to the Sun as a possible Earth-killer source, evidence that our Sun contributed to any mass extinction event in the past via a huge Earth-directed flare. Very large solar flares have been observed (such as the 1859 Carrington white light flare)… but we are still here.In an added twist, solar physicists are surprised by the lack of solar activity at the start of this 24th solar cycle, verge of another Maunder minimum and “Little Ice Age”. in stark contrast to NASA solar physicist’s 2006 prediction that this cycle will be a “doozy”.when predicting solar flare events. Although space weather can read the Sun accurately enough to say with any certainty just how active a solar cycle is going to be. prophecy, prediction or myth, there is no physical way to say that the Earth will be hit by any flare, let alone a big one in extinction event. Yes, satellites may be damaged, causing secondary problems such as a GPS loss (which might disrupt air that a large solar flare will hit us just as the Earth’s geomagnetic field weakens and reverses, leaving us unprotected
from the ravages of a CME…
2012-time-odyssey.