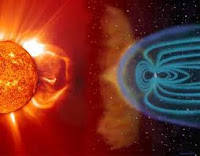 The Sun will be approaching the peak of its 11-year cycle, called “solar maximum”, so we can expect a lot of solar activity. Some predictions put the solar maximum of Solar Cycle 24 even more energetic than the last solar maximum in 2002-2003 (remember all those record breaking X-class flares?). Solar physicists are already getting excited about this next cycle and new prediction methods are being put to good use. Like most of the various ways the world is going to end in 2012, the possibility of the Sun blasting out a huge, Earth-damaging solar flare is very attractive to the doomsayers out there. But let’s have a look at what really happens during an Earth-directed solar flare event, the Earth is actually very well protected. Although some satellites may not be…The Earth has evolved in a highly radioactive environment. The Sun constantly fires high-energy particles from its magnetically dominated surface as the solar wind. During solar maximum (when the Sun is at its most active), the Earth may be unlucky enough to be staring down the barrel of an explosion with the energy of 100 billion Hiroshima-sized atomic bombs.
This explosion is known as a solar flare and the effects of which can cause problems here on Earth.Before we look at the Earth-side effects, let’s have a look at the Sun and briefly understand why it gets so angry every 11 years or so.

First and foremost, the Sun has a natural cycle with a period of approximately 11 years. During the lifetime of each cycle, the magnetic field lines of the Sun are dragged around the solar body by differential rotation at the solar equator. This means that the equator is spinning faster than the magnetic poles. As this continues, solar plasma drags the magnetic field lines around the Sun, causing stress and a build up of energy (an illustration of this is pictured). As magnetic energy
increases, kinks in the magnetic flux form, forcing them to the surface. These kinks are known as coronal loops which become more numerous during periods of high solar activity. As coronal loops continue to pop up over the surface, sunspots appear too, often located at the loop footpoints. Coronal loops have the effect of pushing the hotter surface layers of the Sun (the photosphere and chromosphere) aside, exposing the cooler convection zone (the reasons why the solar surface and atmosphere is hotter than the solar interior is down to the coronal heating phenomenon). As magnetic energy builds up, we can expect more and more magnetic flux to be forced together. This is when a phenomenon known as magnetic reconnection occurs.
Reconnection is the trigger for solar flares of various sizes. As previously reported, solar flares from “nanoflares” to “X-class flares” are very energetic events. Granted, the largest flares my generate enough energy for 100 billion atomic explosions, but don’t let this huge figure concern you. For a start, this flare occurs in the low corona, right near the solar surface. That’s nearly 100 million miles away (1AU). The Earth is nowhere close to the blast.
As the solar magnetic field lines release a huge amount of energy, solar plasma is accelerated and confined within the magnetic environment (solar plasma is superheated particles like protons, electrons and some light elements such as helium nuclei). As the plasma particles interact, X-rays may be generated if the conditions are right and bremsstrahlung is possible. (Bremsstrahlung occurs when charged particles interact, resulting in X-ray emission.) This may create an X-ray flare.

The Problem with X-ray Solar Flares
The biggest problem with an X-ray flare is that we get little warning when it is going to happen as X-rays travel at the speed of light (one of the record breaking 2003 solar flares is pictured left). X-rays from an X-class flare will reach the Earth in around eight minutes. As X-rays hit our atmosphere, they are absorbed in the outermost layer called the ionosphere. As you can guess from the name, this is a highly charged, reactive environment, full of ions (atomic nuclei, and free electrons).
During powerful solar events such as flares, rates of ionization between X-rays and atmospheric gases increase in the D and E region layers of the ionosphere. Interestingly, the increase in electron density during a SID boosts the propagation of Very Low Frequency (VLF) radio, a phenomenon scientists use to measure the intensity of X-rays coming from the Sun.
Coronal Mass Ejections?
X-ray solar flare emissions are only part of the story. If the conditions are right, a coronal mass ejection (CME) might be produced at the site of the flare (although either phenomenoncan occur independently). CMEs are slower than the propagation of X-rays, but their global effects here on Earth can be more problematic. They may not travel at the speed of light, but We have a handful of spacecraft sitting between the Earth and the Sun at the Earth-Sun Lagrangian (L1) point with sensors on board to measure the energy and intensity of the solar wind. Should a CME pass through their location, energetic particles and the interplanetary magnetic field (IMF) can be measured directly. ACE teams up with the Solar and Heliospheric Observatory (SOHO) and the Solar TErrestrial RElations Observatory (STEREO), so CMEs can be tracked from the lower corona into interplanetary space, through the L1 point toward Earth. These solar missions are actively working together to provide space agencies with advanced notice of an Earth-directed CME.
So what if a CME reaches Earth? For a start, much depends on the magnetic configuration of the IMF (from the Sun) and the geomagnetic field of the Earth (the magnetosphere). Generally speaking, if both magnetic fields are aligned with polarities pointing in the same direction, it is highly probable that the CME will be repelled by the magnetosphere. In this case, the CME will slide past the Earth, causing some pressure and distortion on the magnetosphere, but otherwise passing without a problem. However, if the magnetic field lines are in an anti-parallel configuration (i.e. magnetic polarities in opposite directions), magnetic reconnection may occur at the leading edge of the magnetosphere.
In this event, the IMF and magnetosphere will merge, connecting the Earth’s magnetic field with the Sun’s. Satellites in Peril
As the CME magnetic field connects with the Earth’s, high energy particles are injected into the magnetosphere. Due to solar wind pressure, the Sun’s magnetic field lines will fold around the Earth, sweeping behind our planet. The particles injected in the “dayside” will be funnelled into the polar regions of the Earth where they interact with our atmosphere, generating light as aurorae. During this time, the Van Allen belt will also become “super-charged”, creating a region around the Earth that could cause problems to unprotected astronauts and any unshielded satellites. For more on the damage that can be caused to astronauts and spacecraft, check out “Radiation Sickness, Cellular Damage and Increased Cancer Risk for Long-term Missions to Mars” and “New Transistor Could Side-Step Space Radiation Problem.”
As if the radiation from the Van Allen belt wasn’t enough, atmosphere. As you’d expect, as if the Sun hits the Earth with X-rays and CMEs, there will be inevitable heating and global expansion of the atmosphere, possibly encroaching into satellite orbital altitudes. If left unchecked, an aerobraking effect on satellites could cause them to slow and drop in altitude. effect on satellites orbiting Earth as any slowing of velocity could cause it to re-enter the atmosphere.
Although satellites are on the front line, if there is a powerful surge in energetic particles entering the atmosphere, we may feel the adverse effects down here on Earth too. the X-ray generation of electrons in the ionosphere, some forms high-latitude regions, a vast electric current, known as an particles. With an electric current comes a magnetic field.
Depending on the intensity of the solar storm, currents may be induced down here on the ground, possibly overloading national power grids. On March 13th 1989, six million people lost power in the Quebec region of Canada after a huge increase in solar activity caused a surge from ground-induced currents.