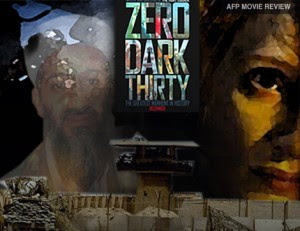 It’s hard to watch new movies nowadays. Either I’ve seen too many or they seem to contain the same elements and lack originality, or enough originality to keep my attention. Whatever the case, they just don’t make ‘em like they used to it seems. Zero Dark Thirty (ZDT) is no exception.

Grimacing as I discovered the running time (157 minutes) and realizing that I had to suspend belief, since there is zero public evidence that Usama, or Osama bin Laden was murdered during the alleged May 2011 SEAL raid, I nonetheless took my seat in an almost empty theatre for a matinee showing.
Just as I feared, the movie was a pastiche of cliché with political correctness sewn through, which is today’s movie crop.
ED Noor: Be it “crop” or “crap”, what a difference in honesty a simple vowel can make!
The opening sequence was a black screen with audio chatter, including actual or staged 9-1-1 calls from the September 11, 2001 attacks. I imagine the images were blacked out so the film could not be blamed for profiting off the attacks. This is especially ironic, considering that this one event is responsible for untold profits for the military-industrial-intelligence complex. I guess they’re the only ones who can make money off of false-flag attacks.
The movie opens up with a torture scene at a Central Intelligence Agency Pakistani “black site,” which are secret prisons located abroad run by the “Agency.” Thirty minutes later the uncomfortable scene is over, after imparting the flawed wisdom, ‘Yes, torture works!’ which rankled various United States Jewish Senators for the supposed misportrayal. Sens. Dianne Feinstein (D-Calif.), Carl Levin (D-Mich.) and John McCain (R-Ariz.) believe the CIA may have misled the director and screenwriter of ZDT; both filmmakers publicly addressed these concerns recently. McCain, who is as pro-Israel as anyone on Capitol Hill, stated that ZDT “gives ammunition to Islamic extremists.”
ED Noor: How ridiculous that these creatures dare to protest considering that movies as Zero Dark Thirty are made with full approval and cooperation of the American military. Like Top Gun, this film was also intended to serve as a recruitment tool.
HOLLYWOOD AND THE PENTAGON ~ A love affair from Hades
We are introduced during this dragged-out scene to the protagonist of the film, Maya, played by American actress Jessica Chastain, who for some reason was named by Time magazine as one of “The 100 Most Influential People in the World” in 2012. That was a surprise to me since I never even heard of her before seeing this movie. Maya is a CIA officer who has spent her entire career obsessed with Osama bin Laden, who is referred to by the spooks in the flick as “UBL,” preferring the more exotic Usama over Osama. Reassigned to the U.S. embassy in Pakistan, she finds the torture hard to take initially but then transforms to its greatest advocate.
The movie unfolds over the course of eight years, as the Agency follows leads and uses electronic eavesdropping technology to locate the now-infamous compound in Abbottabad, Pakistan, culminating in the latest death of UBL. Along the way, the ticket-holder is treated to a few memorable lines from Maya.
After several of her colleagues are killed by a suicide bomber in 2009 at Forward Operating Base Chapman in Afghanistan, the most lethal attack against the CIA since the 1983 U.S. embassy bombings, she says,

Speaking to the SEALs before the raid, Maya rapidly fires off this ridiculous line:

“Quite frankly, I didn’t even want to use you guys, with your dip and Velcro and all your gear bullshit. I wanted to drop a bomb. But people didn’t believe in this lead enough to drop a bomb. So they’re using you guys as canaries. And, in theory, if bin Laden isn’t there, you can sneak away and no one will be the wiser. But bin Laden is there. And you’re going to kill him for me.”

ED Noor: Heavens! Women in film being degraded to the level of psychopathic male morons! How far we have come, ladies.
. 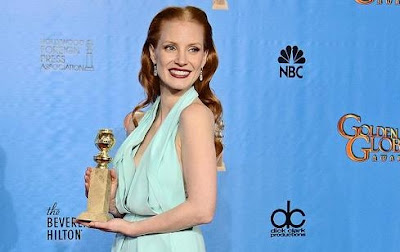 Mentally exhausted at that point, I wondered if this was worth the time and cost of admission. Scooting out to pick up my son at school as the credits began to scroll, my view of ZDT was corroborated by my wife, who had come along out of necessity, as a scheduled event was to immediately follow after school. No stranger to all sorts of propaganda growing up in a satellite state of the Soviet Union, she was no doubt tuned into the deception before I was, being a product of the Great American Fantasyland.
The danger from a movie of this sort, of course, is the effect it will have on the unsuspecting and unread American public, who so desperately wants to believe in just about everything the U.S. government utters.
ZDT will sadly serve to harden their beliefs about 9-11 and UBL, further complicated the task of those few “truth” warriors who prefer hard, uncomfortable evidence over a feel-good fantasy narrative that provides instant gratification.

Digging behind the props, the sets and the special effects, I uncovered another complex Jewish-run plot meant to influence this and future generations for their distinct and insidious purposes.
The purpose of this movie was to memorialize the official 9-11 narrative, just as the myriad of Holocaust® movies do for that imagined event.

The money behind ZDT was provided indirectly by Lawrence Joseph “Larry” Ellison, the co-founder and CEO of Oracle Corporation, “one of the world’s leading enterprise software companies.” Ellison ranked as the third wealthiest American citizen in 2012, worth $41 billion. He was born in Manhattan to a Jewish mother and adopted when he was nine-months-old by Jewish relatives in Chicago and raised according to Jewish religion and tradition.
. 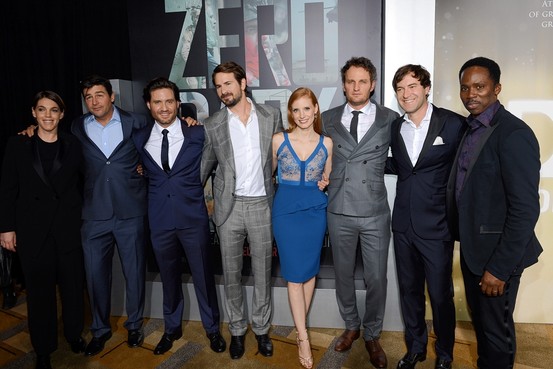 Megan Ellison, far left, with colleagues from ‘Zero Dark Thirty,’ which she produced.
Ellison’s pay packages are legendary on Wall Street. In 2007, he walked away with over $61 million and in 2008 over $84 million. In October of last year, he was listed as the eighth richest person in the world, but during 2000, he was ranked as the richest man in the world. In 2006 he was the richest Californian according to Forbes, which ranked him as the sixth richest person in the world in 2010, the same year that The Wall Street Journal reported that he was the best-paid executive in the last decade, “earning” $1.84 billion, mostly through company stock options. He made headlines again when it was reported that he purchased 98 percent of the Hawaiian island of Lana’i in June of last year for around $550 million.
Ellison is perhaps best well-known throughout the “truth” community as spearheading a project for the CIA, a database he named “Oracle,” which is of course the name of his company today. He is also known for his offer to donate to the U.S. government “software that would enable it to build and run a national identification database and issue ID cards.”
Oracle’s co-President and Chief Financial Officer is Safra Ada Catz, an Israeli-born businesswoman, who has been with Ellison since 1999 and on the board since 2001. In 2009 she was ranked by Fortunemagazine as “the 12th most powerful woman in business,” and by Forbes as “the 16th most powerful business-woman.” Fortune also revealed she was the highest-paid woman among Fortune 1000 companies in 2011, taking home over $51 million. Importantly, since 2008, she has been a director of HSBC, which just last month paid a record nearly $2 billion fine in a money laundering case.
Ellison’s 26-year-old daughter Megan “was able to write a check to cover the entire $45 million budget of ‘Zero Dark Thirty,’” according to a January 18, 2013 article in The Wall Street Journal, since upon turning 25, she “gained access to as much as $2 billion of her father’s fortune.”
Ms. Ellison “has never granted a formal interview” and has “no formal business education and very little filmmaking training ~ she spent less than a year at the University of Southern California film school before dropping out,” but now works out of “a compound of homes nestled in the Hollywood Hills with sweeping views of Los Angeles,” with one of these homes listed on the market for $15.5 million.
. 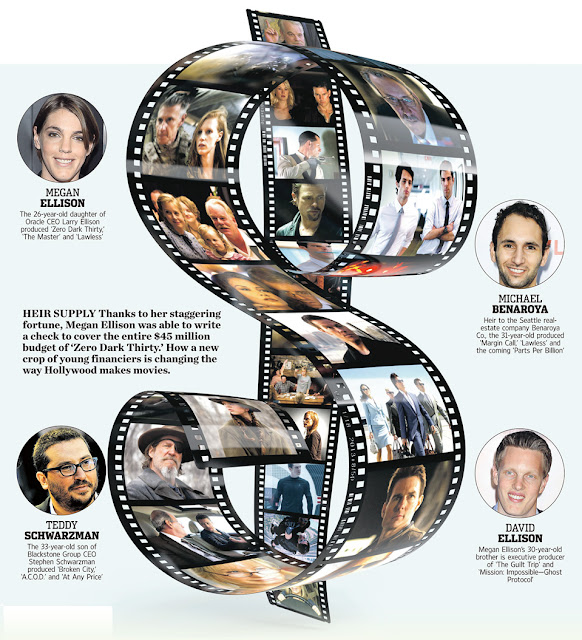 Ed Noor: For more on this topic please see:THE YOUNG MOGULS
The Journal states that she “is part of a new crop of young scions with deep pockets who are changing the way Hollywood makes movies. Among the others:

All of the above mentioned film financiers are Jewish, save Middleton, lending more evidence to the fact that Jews do control Hollywood, obvious to the unbiased observer, but an “anti-Semitic canard” to the special interests whose sole purpose is to disavow the connection between Jews and Tinseltown.
The film’s director was , who was, besides the principal actors, possibly the only notable Gentile on the ZDT team. Selected as a star and approved for advancement by Jewish-controlled Hollywood, confirmed by the bestowment of incestual awards and other forms of recognition, Bigelow became “the first woman to win the Academy Award for Best Director, the Directors Guild of America Award for Outstanding Directing, the BAFTA (British Academy of Film and Television Arts) Award for Best Direction, the Critics’ Choice Award for Best Director” and “the Saturn Award for Best Director.”
Bigelow won the National Board of Review Award for Best Director for ZDT, the first time a woman has won that award. As well, she won the New York Film Critics Circle Award for Best Director for ZDT, making her the first woman to win that award twice; the first was for directing The Hurt Locker. Interestingly, two years before the aforementioned Chastain, Jewish-controlled Time magazine named Bigelow one of “The 100 Most Influential People in the World.”
Teaming up with Bigelow again was Jewish-American journalist, screenwriter and film producer, Mark Boal, who has also been tagged for advancement by the Jewish gatekeepers of Hollywood. Nominated for the Academy Award for Best Original Screenplay for ZDT, he won Academy Awards for Best Original Screenplay for The Hurt Locker and “six other major awards as well.”
ZDT was released to wide Jewish-controlled critical acclaim and nominated for five Academy Awards including Best Picture, Actress and Original Screenplay, and has another 22 wins and 32 nominations. Released on nearly 3,000 screens, it grossed almost $25 million the weekend of January 11, and has so far racked up over $35 million in U.S. box office receipts.
According to the Journal article, the “film’s prospects are complicated by a national debate about whether it condones the use of torture as an interrogation technique, as well as whether it falsely depicts torture as having produced information that resulted in the CIA’s ability to locate bin Laden.”
The Academy Award winners will be announced on February 24, 2012.
Bookmark the permalink.