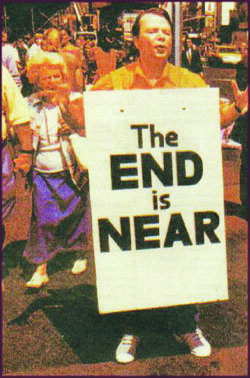 There are many theories about whether or not the world will end in 2012. A brief survey will help guide the curious reader to their own areas of interest. First, there are many books proclaiming that the world will definitely end in 2012. Various causes and predictions are brought to bear on the argument, from asteroids to earthquakes to pole shifts. A cataclysmic scenario cannot be eliminated for 2012.

One should be wary, however, that the authors of these books capitalise on a doomsday marketing hook to sell books. They are betting that people are already so nihilistic and pessimistic about life, that if they put out books that reinforce preconceived expectations, they’ll make lots of cash. Unfortunately, this formula will probably not change much in the next few years. But discerning readers who want to go deeper into the profound questions raised by 2012 have other options.

We should always remember that 2012 is, first and foremost, an artefact of the ancient Maya calendar tradition. The Maya themselves emphasised transformation and renewal during cycle endings, suggesting that catastrophe theorists are stopping short of the big picture, and we must meditate more deeply on what catastrophe and transformation really mean.

Various books in the marketplace discuss soul retrieval, healing, spiritual ascension and awakening, and meditation practices. All of these pursuits can help a sincere seeker become more empowered, aware, and clear in regards to what transformation and transcendence mean. Whether you believe in doomsday or enlightenment, understanding transformation and transcendence is critical to understanding 2012.

But the dire situation in the world today cannot be ignored. Population and pollution data suggest that the world as we know it cannot possibly continue for much more than twenty or thirty years. Within many of our lifetimes, we may indeed get to experience the end of the world as we know it. This scenario is unavoidable, and so we must all become conscious transformers of our own habits, lifestyles, and values so that, together, we can create a better world.

Geoff Stray’s book Beyond 2012, Catastrophe or Ecstasy: A Complete Guide to End-of-Time Predications is an indispensable resource for theories, fictions, visions, and predictions about 2012. They fall into two broad categories, as suggested by the subtitle, “catastrophe or ecstasy.” For those that believe 2012 is a spiritual opportunity, the experience will ultimately be decided by the subjective state of each individual. Many say that fear and love are the two options when responding to 2012.

Stray’s book is important, because it examines theories that are flawed. For example, writer Carl Johan Calleman rejects the established 2012 date, repeatedly trying to denounce its validity, and argues that the “real” end date falls on October 28, 2011. Many authors try to craft their careers on a trademark idea that they can claim as their own, but in doing so they often disregard fundamental facts of the Maya calendar. Calleman’s overall call to spiritual awakening is, nevertheless, a laudable goal.

Visionary philosopher Terence McKenna devised a theory of time called Timewave Zero. Based on the I Ching, his Timewave predicts periods of novelty and habit, and models historical events very well. The upshot of the theory is that it must reach a temporal terminus, which McKenna calls the concrescence, the eschaton, the singularity at the end of time. McKenna believed that a radical shift, a collective rupture of plane, would occur at dawn on December 21, 2012.

José Arguelles, best known for his role in the Harmonic Convergence of 1987, created an entire school of thought that is laid out in his books and in his Dreamspell kit/game. Although he uses a day-count that is not in synchronisation with the surviving, authentic Maya day-count, many believe that his ideas are worth following. Specifically, that we must abandon the artificial clock rhythm dictated by the “12:60” frequency of industrial materialism, and that we can re-attune with the cosmos by following a Maya-based frequency, the “13:20.” In Arguelles’ model we have until December 21, 2012 to “get on the galactic beam” and synchronise.

John Major Jenkins takes the approach of reconstructing the original 2012 revelation by going to the source of the 2012 calendar – an early Maya site in southern Mexico called Izapa. There, carved monuments encode astronomy, prophecy, and spiritual teachings. Jenkins’ book Maya Cosmogenesis 2012 reconstructed how the Maya positioned their calendar to target a rare astronomical alignment that occurs in the years around 2012, a “galactic alignment” occurring between 1980 – 2016. He explains how the Maya Creation Myth, preserved on Izapa’s monuments, teach about abandoning ego-based fears and reconnecting with higher wisdom.

The bottom line on how newcomers to the 2012 discussion can approach the topic is as follows. First, avoid systems or models that try to stimulate fear. What is the point of generating more fear? Fear closes us to unseen possibilities. Second, do some serious research into Maya cosmology and mythology, and any spiritual traditions that deal with transformation and renewal. Third, begin a spiritual practice, such as Vipassana meditation, Tai Chi, or yoga, through which you can deepen your own relationship with the wisdom that resides within all of us.

Will the world end in 2012? The short answer is yes, the long answer is no.

Read this article with its illustrations by downloading
your copy of New Dawn 110 (PDF version) for only US$2.95