“What Now” Reveals a Different Side of Rihanna

Rihanna’s latest video “What Now” is yet another tribute to the elites, however, this time, with a new flare. Rihanna is known for her videos that depict the glamor of being in the elite occult, but in this new video, we see a side to Rihanna that shows something a little more sinister and dark. “What Now” is a video that shows a victim lost in within themselves with no chance of reclaiming freedom and their old ways again.

The video begins with a common theme in most of all occult videos: Being under surveillance. This theme was also carried off in Britney’s video “Hold it Against Me”, where all of her music videos were being played back in the background, as Britney seemed to go under some ritualism. (Provide link:  http://vigilantcitizen.com/musicbusiness/britney-spears-mind-control-and-hold-it-against-me/) 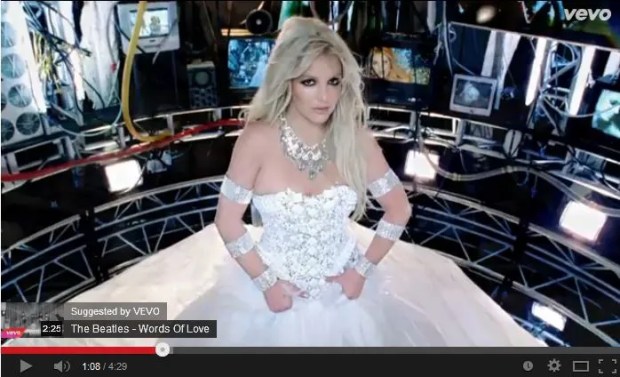 Britney is surrounded by taping of her old music videos. She was watched from the beginning.

Rihanna’s video begins in a dark room, which the floor contains some puddles of water. Four television screens are piled two by two, looking a little bit reminiscent to a surveillance room. In the screens, we see footage of Rihanna as if it were via a security camera. 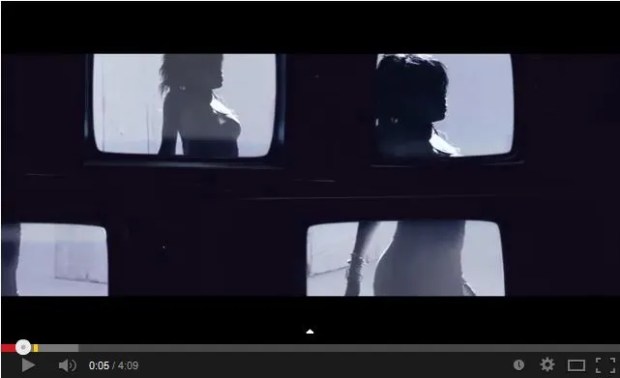 Rihanna is being watched. 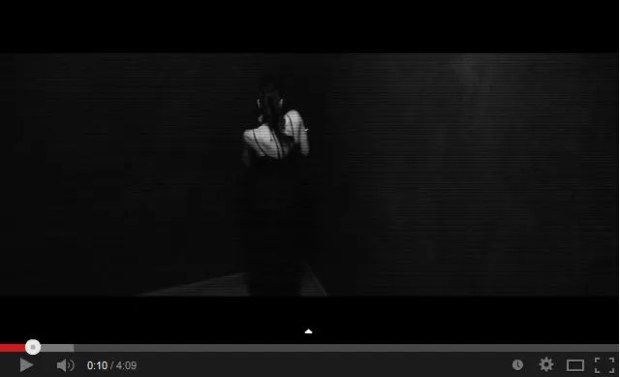 Notice the “recording lines” (I apologize for lack of better word) that is shown on the screen.

It is a little bit unsettling to see Rihanna standing alone in dark room, as the scene switches to her staring at the screen with dead eyes and a total lack of emotion. In her past videos, she is shown relishing in the joys of the elite. Now we are starting to see a completely different side; “The price of fame” per se.

As Rihanna stares at the camera, the image being to static and distort, causing the video to take a quite dramatic turn. Via the security camera, we begin to see Rihanna taking on some odd contortions.  In one frame, her back is fully arched in one scene, as if she was being possessed… 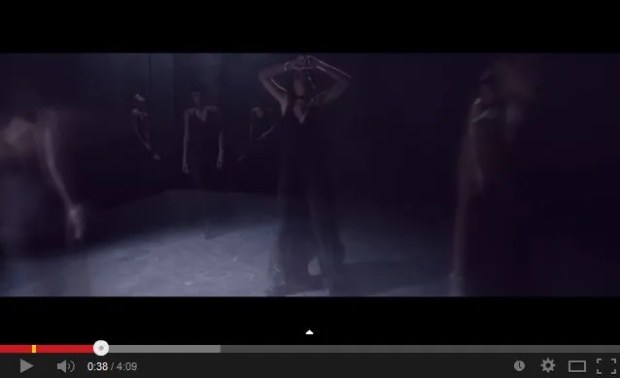 Duality, a common theme in occult videos is represented. Could her odd contortions be the result of her inner core shattering?

Kim Noble, who is said to have multiple personalities, painted this photo as Ria Pratt (a 12 year old alter, among her many personalities). This painting represents the splitting of a core personality. Three girls are being tortured by 3 different handlers. Above them is the silhouette of each of the girls, representing a split in the personality that has dissociated.

Here is a method to create multiple personalities, as described by the book ‘The Illuminati formula Used to Create an Undetectable Total Mind Control Slave’ by Cisco Wheeler and Fritz Springmeier:

The split brain programming done by the Illuminati is grotesque. A drug is injected at the base of the skull into one hemisphere of the brain to shut it down, while the other hemisphere is kept awake. Torture is then carried out to split the mind. What this does is create programs and alters which are associated with only half of the brain. The brain is being further divided from itself.

Sure, Rihanna may act like she’s under the influence of something in this video (Possibly a sedative in the beginning, which kept her so calm until she begins to contort herself), but she surely is not being hurt in any way, right? 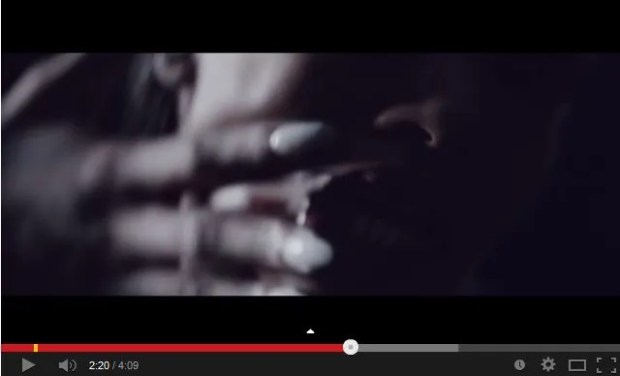 Notice her movements. How non-humanistic do they appear? It is almost is if she was being controlled by ‘something else’. This is very similar to the case of Elisa Lam (Further elaborated here: http://vigilantcitizen.com/vigilantreport/mysterious-case-elisa-lam/) . 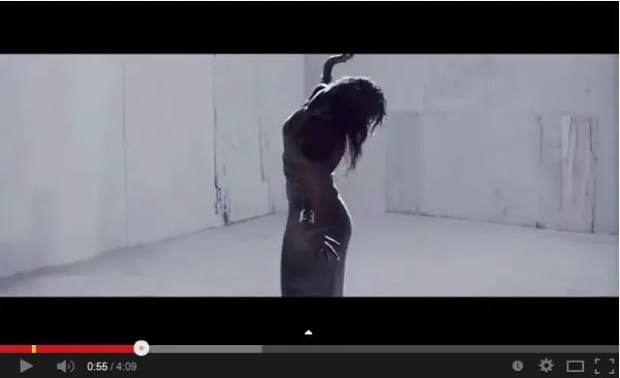 Rihanna moves her body and hands in a strange way, that looks downright creepy.

Let’s take a look at her lyrics, shall we?

I’ve been ignoring this big lump in my throat
I shouldn’t be crying
Tears were for the weaker days, I’m stronger now
Or so I say, but something’s missing

Rihanna expresses a massive amount of grief, but claims she ‘shouldn’t be crying’. Why? She’s clearly upset but she is now under the impression that human emotions are for the weak and there are no need for them. Something is missing that allows her to feel that way. Judging by the emptiness in her eyes, as seen earlier, it appears the an extreme human quality has now been taken away: Her soul.

The second part of the lyric provides a powerful message. She realizes that she is being watched and refers it as a “it” saying that’s mocking her, possibly because it knows something she doesn’t; the true price of fame. The most significant part is, that ‘it’s’ watching her via a 2-sided mirror (that is, a mirror that is a mirror to the one looking into it, but a window to the person behind it). When Rihanna looks into a mirror, she sees her empty self, meanwhile something more sinister is watching her without her knowing it.

For the rest of the part of the video Rihanna showed screaming, and shaking violently, while an image of her sings within her body.

Now presents a good time to look another verse she sings:

I found the one, he changed my life
But was it me that changed
And he just happened to come at the right time
I’m supposed to be in love but I’m numb again

So this former ‘it’ is now a ‘he’ who has changed her life, and that ‘he’ did. In 2005, Rihanna came upon the music scene as a fresh faced girl from the Barbados who had a squeaky clean imagine. According to billboard.com, her album “Music of the Sun” (Which was under her ‘good’ image) sold only 609,000. That’s a failure in the pop industry but after she went ‘bad’ her album “Good Girl Gone Bad” sold an astonishing 2.8 million records. Change her life, it did.

However it’s clear to her that no matter how much she’s in love with the power and fame, she still feels numb or empty.

In 2008, Britney suffered a ‘mental breakdown’ that caused her to shave her head because she was ‘insane’. We, at VC, know better. Britney claimed that she was tired of “things being plugged into her head”, so she believed that shaving her head was a way to achieve freedom. Unfortunately for her, to the elite, it was an act of defiance and Britney was sent to “Rehab” (We know this as Reprogramming site) to ‘correct’ her, thus giving us the shell of a Britney we see today.

In this video, Rihanna shows us the consequences of attempting to break free, all in the frame of 60 seconds or less. Rihanna is seen shouting the ‘someone’ in the ceiling and all of the sudden she is forced back by an unknown force. 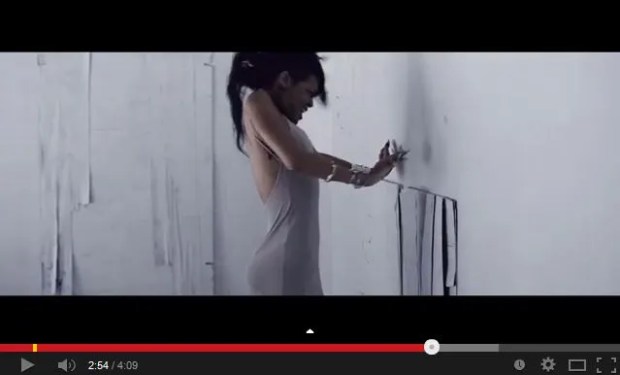 Rihanna is literally pushed violently in the middle of her act of defiance, causing her to forcefully fall to the ground.

As soon as she falls, the video gets unexpectedly violent and fast moving. It is if we are now entering the mind of a traumatized slave. We witness Rihanna screaming, shaking even more violently and in one panel she scoots to a corner (a fear tactic (Also similar to what Elisa Lam did in the elevator)). The scenes flash from a severely stressed Rihanna, from her rolling on the ground in what looks like pain, to ominous scenes of chaos and destruction. 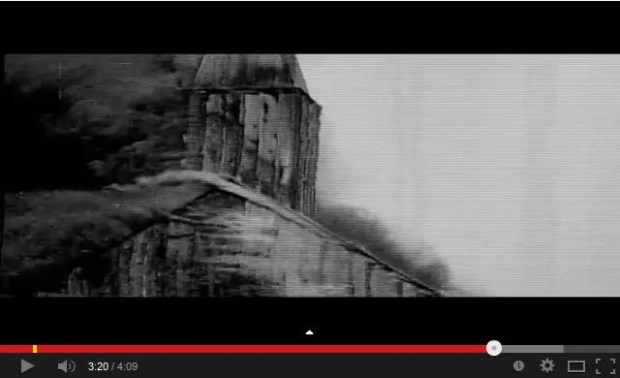 One of the scenes that flash is a destroyed building that may represent her disintegrating mind. 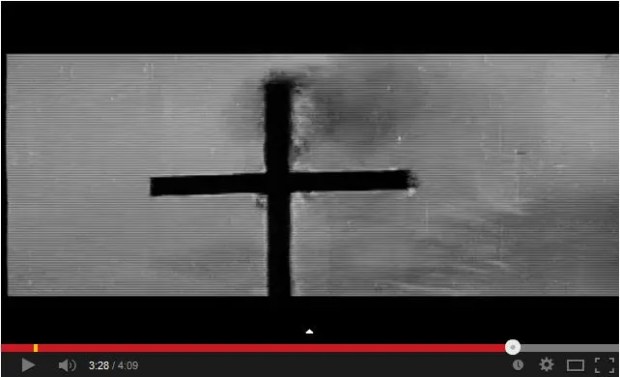 This image right here may hold the answers we need.

Throughout the song, her chorus was:

She sings this part, especially as she goes through the trauma as she loses her grip on reality. She cannot figure out that her soul was the key to her humanity, which allowed her to embrace and feel emotion. She can only hope to wait it out, though most likely nothing will change.

Just like Britney who seemed to go ‘crazy’ after her defiance, Rihanna too became conflicted with her freedom and her programming.

The screen continues to race from Rihanna is utter fear/pain/suffering to violent and disturbing scenes. In one panal, a chain is showed, which may represent her being locked down.

After fighting to stop the programming, she gives in. She lays alone on the floor in a fetal position. 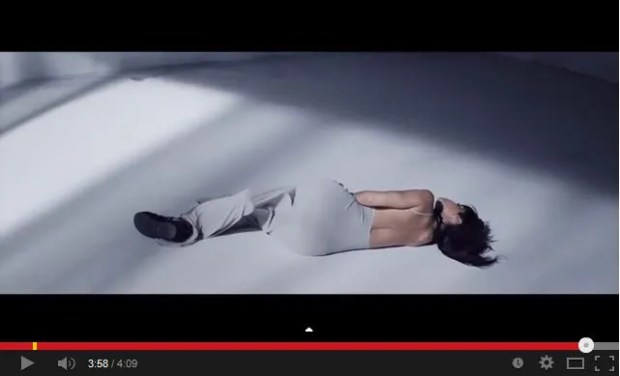 According to Cisco Wheeler and Fritz Springmeier:
“The programmers learned that when a child rolled up in a fetal position it had given up the will to live.”

After the chaos as all ended, she is calm in the same dark room and the video ends just as it begins: Her alone and being watched. The security camera statics and we lose the ability to watch Rihanna alone in her cell. 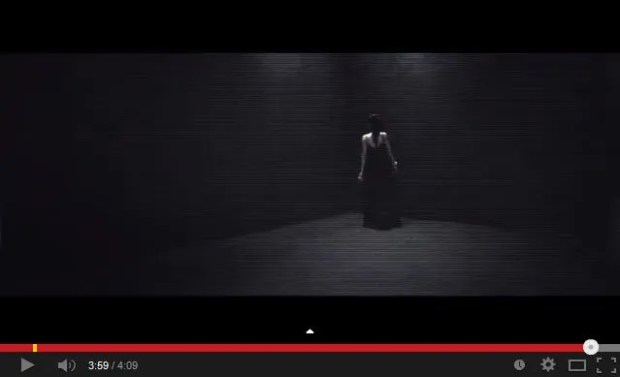 She is back ‘under control’.

Rihanna closes the song with:

As if she is asking herself what she plans to do, and what to do from here. Her loss of humanity caused her to lose her sense of emotion as she states that she doesn’t know what to feel, or how to cry, and cannot determine why. She is lost within herself, with her riches but ultimately trapped.

“What Now” is a completely different video that did not show the ‘gains’ of the elite but the price that is needed to be paid. It is easy to assume that celebrities are happy with the trade off they have made, because the media shows them as ‘happy, beautiful, and successful’. This video has showed us the ugly side of the elite and the pain and suffering that is behind all of the glamor.

The post “What Now” Reveals a Different Side of Rihanna appeared first on The Vigilant Citizen.