What Makes Wing Chun Kung-Fu "The Science of Self-Defense"? 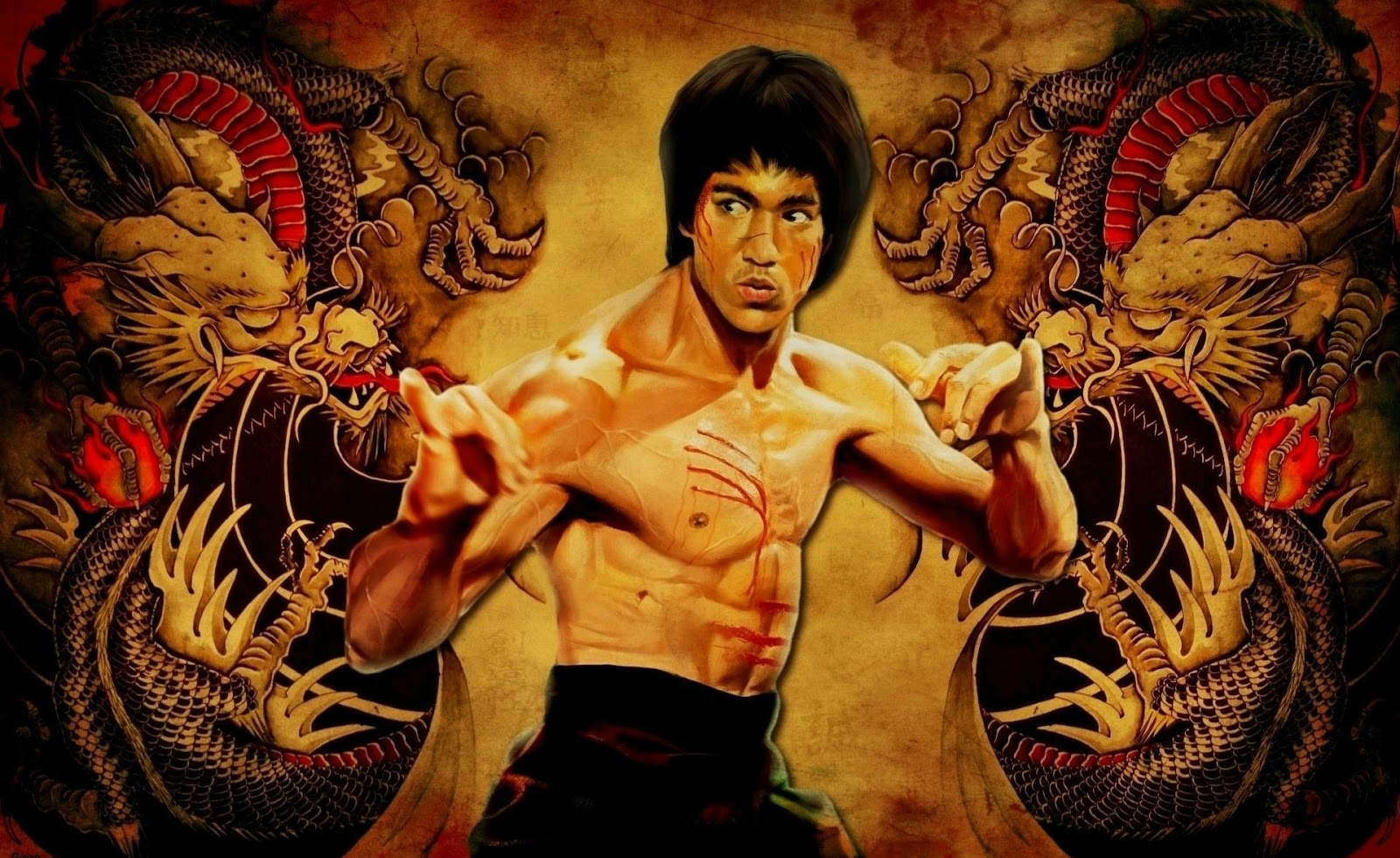 There are thousands of known and practiced martial arts from
every country in the world, and though all martial systems are based on human combat,
different styles have different focuses and blind-spots, strengths and
weaknesses. Some martial styles are based around ancient esoteric forms and traditions,
others are more geared towards sports competitions, and some are designed to maim,
disable and kill people as efficiently and effectively as possible.  Wing Chun is among the latter.

Being a peaceful warrior and vegetarian myself, I aim to
never injure or kill any living creature, but if necessary in self-defense or
in the defense of innocents, if violence is being committed against me or a
loved one, I will use every weapon available to me to incapacitate that
aggressor.  Wing Chun is such a versatile
and superior system, however, that even against deadly aggression, a skilled
Wing Chun practitioner can diffuse and re-direct an opponents’ energy
indefinitely without ever having to actually physically harm them. 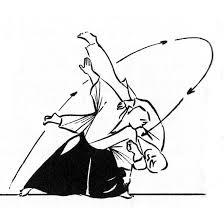 Tai Chi and Aikido masters also train and develop this
ability to completely dominate and control an adversary without ever having to
hurt them.  Only such “soft style”
martial arts can develop this ability because only the soft styles train with
the principle of “no force against force.”
Muay Thai, Boxing, Kickboxing, Karate, Taekwondo, and Wrestling for
example are all hard styles which train brute force against force, conditioning
arms and legs for repeated bone on bone hits.
If you’re a strong young man with solid bones and big muscles preparing
for combat or competition, such hard style bone on bone conditioning is a must,
but Wing Chun wasn’t developed by a big strong young man preparing for combat
or competition, Wing Chun was developed by a small weak old woman preparing for
self-defense. 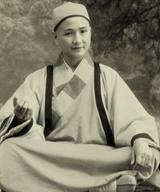 Wing Chun is in fact the only martial art known to have been
invented by a woman.  Ng Mui, a Shaolin
nun on the run from the Manchu government, created Wing Chun as a system of
self-defense that women, or smaller, weaker, slower, older people could
successfully use to defeat men, or bigger, stronger, faster, younger
adversaries.  By allowing the aggressor
to lead, the soft style practitioner, like the woman in couples dancing, is
completely receptive and responsive to the man’s motions and movements then
mirrors him in real-time. 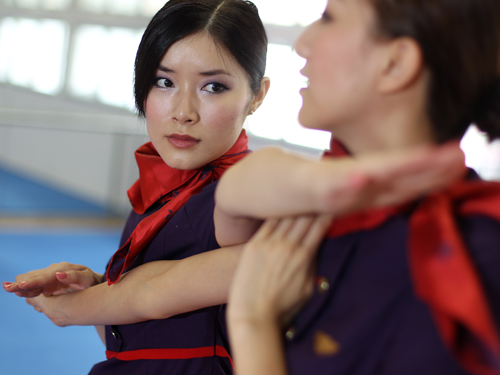 Through sensitivity training like “Chi Sao” (sticky hands)
and “Chi Gerk” (sticky legs), Wing Chun practitioners develop the ability to
receptively respond, re-direct and diffuse or use the opponent’s energy against
them.  By “bridging” and sticking to their
limbs we receive constant tactile information allowing us to manipulate and
stay ahead of attacks. 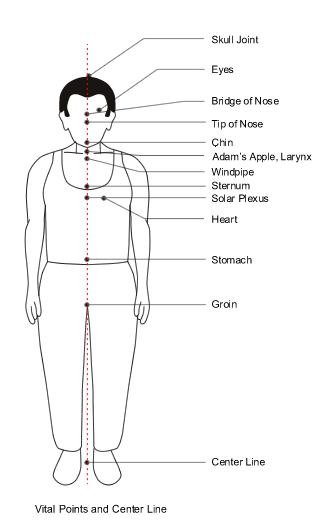 Looking at human anatomy Wing Chun notices that the eyes,
throat, groin and several of our other main vulnerable targets all rest along
the body’s centerline.  For this and many
other reasons we always attack and defend along the center, since both the
opponent’s and our most vulnerable targets are right there.  Then we extend our longest weapons forward
like “Bil Gee” thrusting fingers into the opponent’s eyes and knee stomp kicks
into their lead leg. 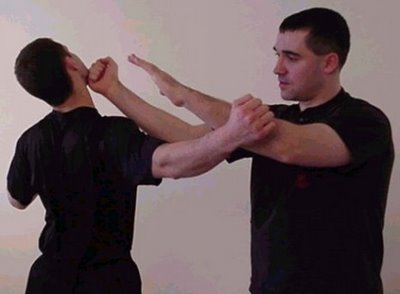 There is an axiom in geometry that states “the shortest
distance between two points is a straight line.”  This is another reason Wing Chun
practitioners always strike and defend straight ahead along the center.  If the opponent initiates a circular attack
like a roundhouse kick or hooking punch, we simply advance straight ahead with
a mirrored straight attack which allows our strike to land first.  This is known as “economy of motion” and is
one of Wing Chun’s main mathematical principles.  Instead of blocking first then hitting back
as in most martial arts, a Wing Chun man will simultaneously block and hit
while the opponent is still mid-strike.
This gives us the surprise factor and results in double the damage
because the opponent’s forward energy is met head on with our straight forward
attack. 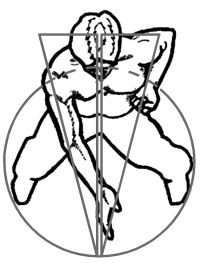 There is an axiom in physics that states “no two objects can
occupy the same space at the same time.”
Keeping this in mind Wing Chun practitioners always aim to occupy the
centerline with our punches and kicks, yielding to and re-directing all
obstacles in the way, but constantly replacing our limbs back across the
center.  Once we control the center by
bridging a bent arm/leg we use sticky hands/legs sensitivity to feel and
exploit the opponent’s under and over-commitments. 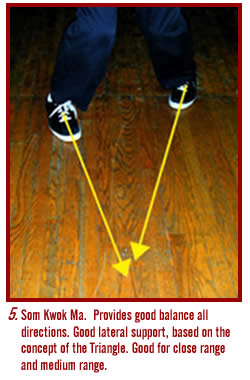 The triangle or pyramid is the strongest shape in nature and
recognizing this, Wing Chun repeatedly uses triangles and 45/60 degree angles
in its structure and movements.  For
example when training we stand slightly pigeon-toed with knees bent in and extend
both arms frontwards making three triangles with our arms, legs, and feet.  The upper triangle, like a door wedge, allows
us to easily control the centerline and the lower triangles allow us to receive
incredible amounts of forward energy without having to back up. 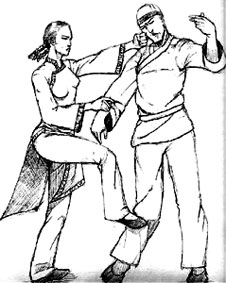 When parrying and attacking we constantly use the power of
45/60 degree angles to deflect, re-direct and cut through our opponent’s
defenses.  The Wing Chun knee stomp kick
45 degrees downward just above the knee-joint is absolutely the easiest and
most effective leg breaking technique in existence.  If massive force is directed at our
centerlines like with a sidekick, Muay Thai teep kick, or a running tackle, we
triangle side-step and advance at 45/60 degrees allowing us to overtake their
position using not brute strength or muscle, but just the power of angles.  If a strong punch comes along our centerline,
we pivot 45 degrees and throw our own centerline punch which cuts through
theirs allowing us to block and strike simultaneously. 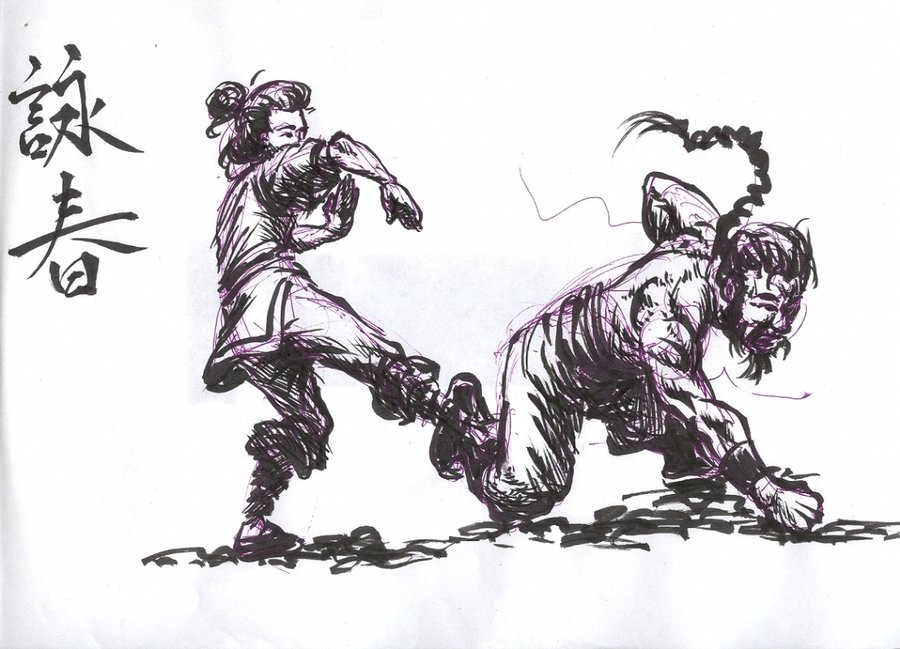 When Wing Chun practitioners kick we don’t chamber our legs
first then extend out straight at 90 degree angles like most Taekwondo, Muay
Thai, or Kickboxing kicks, because as Newton’s axiom warns us, “for every force
or action there is an equal and opposite force or reaction.”  If a smaller, weaker person performs a Muay
Thai teep kick to the trunk of a bigger, stronger adversary, when that kick
connects, instead of pushing back the adversary, that direct force will come straight
back and the power of your own kick will launch you straight backwards.  If instead front and side kicks are performed
Wing Chun style, with no chamber, foot rising straight from ground to target at
a 45 degree angle, the equal and opposite force is absorbed and earthed completely
by our back legs. 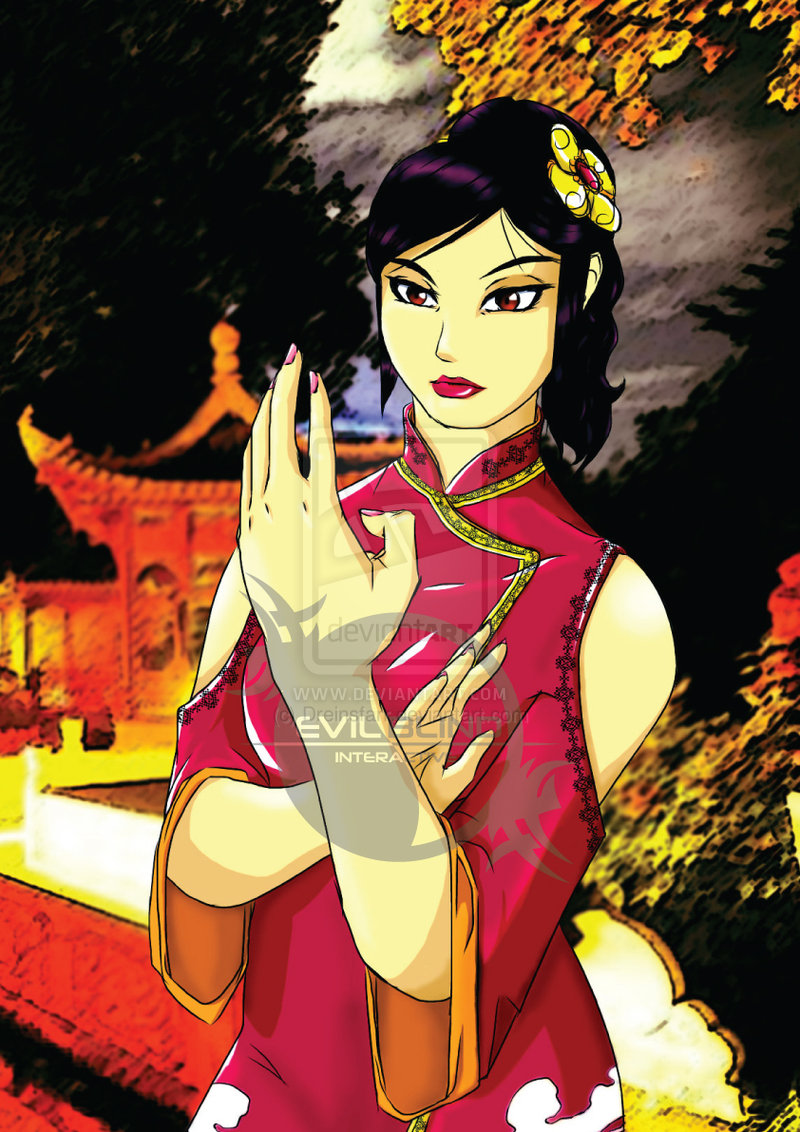 The “immovable elbow” principle of Wing Chun comes from the
observation that our arms are at their strongest and most stable when held
straight ahead about a fist-distance away from our abdomen elbows bent at 135
degrees.  Bent at any more of an angle,
strength is quickly diminished, we become unbalanced and vulnerable to being
pulled; bent at any less of an angle, strength is diminished and we become
vulnerable to being pushed or taken down.
By maintaining this bent arm ready stance, hitting and replacing chain
punches at 135 degrees along the centerline we maximize balance, speed, power
and control.
There are many more examples and reasons why Wing Chun trulyis the science of self-defense, but suffice to say, by taking into account aspects
of physics, kinesthesiology, geometry, and anatomy Wing Chun is less like a
martial art and more like martial science.
The art part is in the application, the drilling and training, making
the science subconscious and second-nature, embedding the muscle-memory,
learning to channel the opponent’s energy, and successfully expressing yours. 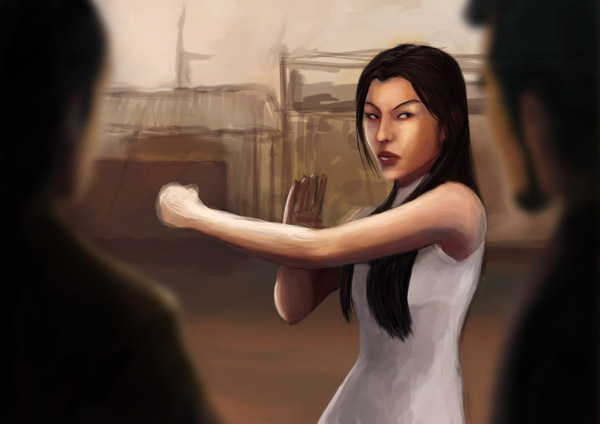