What Does Illuminati Mean? What Is The Illuminati?

What Does The Illuminati Mean?

So, “What does the Illuminati mean?” you ask. Well there is a lot to say about the Illuminati & most of it isn’t very good. Many claim that the Illuminati is like a secret society or an evil underground occult who basically worship the devil or practice “Satanism”. The Illuminati (aka Bavarian Illuminati) originally started out in Bavaria, Germany on May 1, 1776 and was founded by Adam Weishaupt. 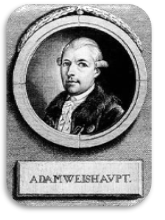 Adam Weishaupt was a professor of cannon law who attended the University of  Ingolstadt . People question rather his intentions were good for starting the whole Bavarian Illuminati group. He claims to have had good intentions, but even his government didn’t trust what he was doing with forming his “Illuminati groups”. Adam Weishaupt was trying to form together groups of the elite people. These people were basically rich, intelligent, or possessed special skills of various kinds. The German Government did not like secretive societies & the ruler of Germany at the time who was Karl Theodor even forced Adam to flee the country. This did not stop the whole movement however as it grew into over two-thousand members within the span of only 10 years.

The Illuminati refers to several different groups, which are very real groups that still exist today. The name derives from the Latin illuminatur, which means “the enlightened” (basically those who have been blessed for being a part of this evil group) & those who are involved practice “Illuminism”.

The Illuminati still exists til this very day as you can see many of the world’s political leaders & celebrities are involved. You’ll often catch these celebrities & politicians using what is called “subliminal messages” or the “Illuminati symbols”. You will hear a lot of Illuminati messages being played in our modernday music & see “Illuminati symbolism” in music videos. The Illuminati has become a part of people’s subconscious imagination as it’s put into their heads through popular culture. References to the secret society are found in a wide variety of media, from music, TV shows, radio, bulletin advertisements, magazines, comic books to even the video games that our children play!

If you would really like to know what the Illuminati is, you’ll have to first become open-minded and become more attentive to the subliminal messages that are being given all around us all the time. Just learn what the “Illuminati Signs”, “Illuminati Symbolism” is & you will began to understand that there is definitely something very peculiar going on….