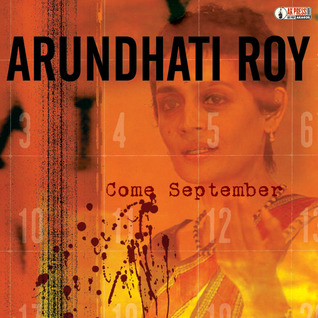 It visualizes the words of Arundhati Roy, specifically her famous ComeSeptember speech, where she spoke on such things as the war on terror,corporate globalization, justice and the growing civil unrest.

It’s witty, moving, alarming and quite a lesson in modern history.

We is almost in the style of a continuous music video. The music used sets thepace and serves as wonderful background for the words of Ms. Roy and images ofhumanity in the world we live all in today.

It needs a press that pretends to be free.
It needscourts that pretend to dispense justice.
It needs nuclear bombs, standingarmies, sterner immigration laws, and watchful coastal patrols to make surethat it’s only money, goods, patents, and services that are being globalized –not the free movement of people, not a respect for human rights, notinternational treaties on racial discrimination or chemical and nuclearweapons, or greenhouse gas emissions, climate change, or god forbid, justice.

It’s as though even a gesture towards international accountability would wreckthe whole enterprise.
Close to one year afterthe War against Terror was officially flagged off in the ruins of Afghanistan,in country after country freedoms are being curtailed in the name of protectingfreedom, civil liberties are being suspended in the name of protectingdemocracy. All kinds of dissent are being defined as “terrorism”. All kinds oflaws are being passed to deal with it. Osama bin Laden seems to have vanishedinto thin air. Mullah Omar is supposed to have made his escape on a motorbike.(They could have sent TinTin after him.)
[Laughter]
The Taliban may havedisappeared but their spirit, and their system of summary justice is surfacingin the unlikeliest of places. In India, in Pakistan, in Nigeria, in America, inall the Central Asian republics run by all manner of despots, and of course inAfghanistan under the U.S.-backed, Northern Alliance.
Meanwhile down at themall there’s a mid-season sale. Everything’s discounted – oceans, rivers, oil,gene pools, fig wasps, flowers, childhoods, aluminum factories, phonecompanies, wisdom, wilderness, civil rights, eco-systems, air – all 4,600million years of evolution. It’s packed, sealed, tagged, valued and availableoff the rack. (No returns). As for justice – I’m told it’s on offer too. Youcan get the best that money can buy.
Donald Rumsfeld said thathis mission in the War Against Terror was to persuade the world that Americansmust be allowed to continue their way of life. When the maddened king stampshis foot, slaves tremble in their quarters. So, standing here today, it’s hardfor me to say this, but “The American Way of Life” is simply not sustainable.Because it doesn’t acknowledge that there is a world beyond America.
[Applause]
But fortunately, powerhas a shelf life. When the time comes, maybe this mighty empire will, likeothers before it, overreach itself and implode from within. It looks as thoughstructural cracks have already appeared. As the War Against Terror casts itsnet wider and wider, America’s corporate heart is hemorrhaging.
For all theendless, empty chatter about democracy, today the world is run by three of themost secretive institutions in the world: The International Monetary Fund, theWorld Bank, and the World Trade Organization, all three of which, in turn, aredominated by the U.S. Their decisions are made in secret. The people who headthem are appointed behind closed doors. Nobody really knows anything aboutthem, their politics, their beliefs, their intentions. Nobody elected them.Nobody said they could make decisions on our behalf.

A world run by a handfulof greedy bankers and C.E.O.’s whom nobody elected can’t possibly last.

Soviet-style communismfailed, not because it was intrinsically evil but because it was flawed. Itallowed too few people to usurp too much power. Twenty-first centurymarket-capitalism, American style, will fail for the same reasons. Both areedifices constructed by the human intelligence, undone by human nature.
The time has come, theWalrus said. Perhaps things will become worse and then better. Perhaps there’sa small god up in heaven readying herself for us. Another world is not onlypossible, she’s on her way. Maybe many of us won’t be here to greet her, but ona quiet day, if I listen very carefully, I can hear her breathing.
Thank you.
[Applause]