War is a Racket

War Is A Racket By Major General Smedley Butler

This is General Smedley Butler’s concise and informative 1933 book, War is a Racket, which explicitly outlines how wars are waged by the few at the expense of the many, and how to stop it. 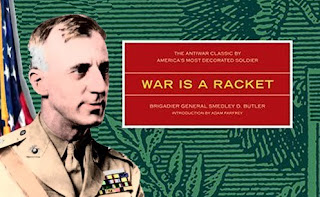 “War is a racket. It always has been. It is possibly the oldest, easily the most profitable, surely the most vicious. It is international in scope. It is the only one in which the profits are reckoned in dollars and the losses in lives. A racket is best described, I believe, as something that is not what it seems to the majority of the people. Only a small ‘inside’ group knows what it is about. It is conducted for the benefit of the very few, at the expense of the very many. Out of war a few people make huge fortunes. In the World War [I] a mere handful garnered the profits of the conflict. At least 21,000 new millionaires and billionaires were made in the United States during the World War. That many admitted their huge blood gains in their income tax returns. How many other war millionaires falsified their tax returns no one knows. How many of these war millionaires shouldered a rifle? How many of them dug a trench? How many of them knew what it meant to go hungry in a rat-infested dug-out? How many of them spent sleepless, frightened nights, ducking shells and shrapnel and machine gun bullets? How many of them were wounded or killed in battle?” 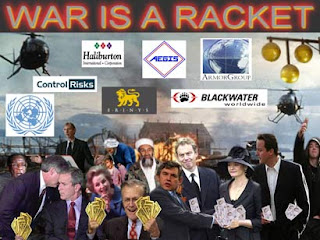 “In the World War, we used propaganda to make the boys accept conscription. They were made to feel ashamed if they didn’t join the army. So vicious was this war propaganda that even God was brought into it. With few exceptions our clergymen joined in the clamor to kill, kill, kill. To kill the Germans. God is on our side… It is His will that the Germans be killed. And in Germany, the good pastors called upon the Germans to kill the allies…to please the same God. That was a part of the general propaganda, built up to make people war conscious and murder conscious. Beautiful ideals were painted for our boys who were sent out to die. This was the ‘war to end all wars.’ This was the ‘war to make the world safe for democracy.’ No one mentioned to them, as they marched away, that their going and their dying would mean huge war profits. No one told these American soldiers that they might be shot down by bullets made by their own brothers here. No one told them that the ships on which they were going to cross might be torpedoed by submarines built with United States patents. They were just told it was to be a ‘glorious adventure.'”

“Boys with a normal viewpoint were taken out of the fields and offices and factories and classrooms and put into the ranks. There they were remolded; they were made over; they were made to “about face”; to regard murder as the order of the day. They were put shoulder to shoulder and, through mass psychology, they were entirely changed. We used them for a couple of years and trained them to think nothing at all of killing or of being killed. Then, suddenly, we discharged them and told them to make another “about face”! This time they had to do their own readjustment, sans [without] mass psychology, sans officers’ aid and advice and sans nation-wide propaganda. We didn’t need them any more. So we scattered them about without any “three-minute” or “Liberty Loan” speeches or parades. Many, too many, of these fine young boys are eventually destroyed, mentally, because they could not make that final “about face” alone. In the government hospital in Marion, Indiana, 1,800 of these boys are in pens! Five hundred of them in a barracks with steel bars and wires all around outside the buildings and on the porches. These already have been mentally destroyed. These boys don’t even look like human beings. Oh, the looks on their faces! Physically, they are in good shape; mentally, they are gone.”