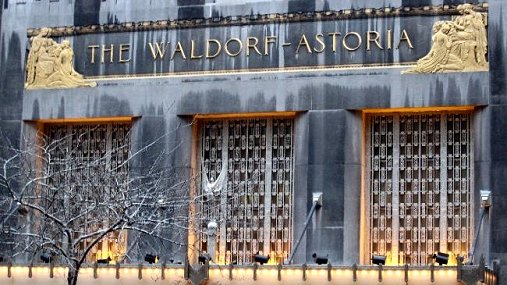 Some of the largest hedge funds, private equity groups, university endowment managers, and other high rollers have met at New York’s up market Waldorf Astoria Hotel to facilitate “the next big thing in finance.”
The event, organized by HighQuest Partners, a heavy hitter in the hedge fund market of big agro, bio-tech and bio-fuel companies charged entrance fees of $3,000. But the sinister undercurrents of the meeting have not been lost on some people.

The money managers attended because they had been promised to make between 25-40 percent returns on short-term investments in areas of the world weighed down by incredible food insecurity or weak or subservient political systems.
Corrupt dictators with no moral qualms about displacing millions of souls from their ancestral lands have become the new Bourgeoisie for the Western elite.

In 2009 alone, nearly 60 million hectares of arable land ~ an area the size of France ~ was purchased or leased, 70 percent of it in Africa. It’s impossible to acquire that much of land without the continued taking of land previously held by small indigenous farmers. That number has only been increasing as more and more land has been leased off to Western companies in Africa by corrupt governments. 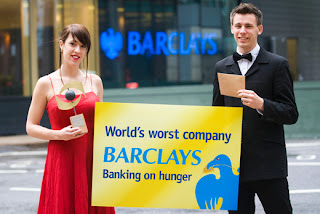 In Britain, protesters took to the street and actually did present this award to a Barclays uppityup.
In a 2011 post on their website, HighQuest partners bragged about representing $3.5 trillion in aggregated institutional assets and 25 million acres under cultivation alone: the figure is expected to double by the end of 2012.
However the above is only the farming angle on the issue. There is an even more sordid action plan in operation as we speak.
The real estate market has taken a beating courtesy of the toxic assets and mortgages debacle in the US and the West. So the focus of the murky business has shifted abroad. Shady deals with real estate owners in the developing and the Third World countries have ensured a minimum of 40 percent rise in property prices in places where the average annual income is well below $5000 per year. 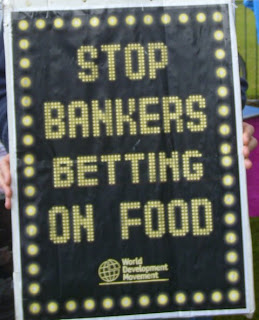 This means a Western land grabber can, vis-à-vis local landowning gangs, invest in real estate futures in countries that even on the face of it are politically opposed to the West. The insider gangs fix prices on the population and ensure 25-40 percent returns every other year for themselves and their Western patrons.
Talk about making a killing!

Colonialism is making a return via a backdoor to blight lives and relieve the world population of what small chances of leading healthy and productive lives they have left. The new techniques of the 1% combined with the human tendency for corruption is the next big danger for humanity.

An investor at a luncheon in Waldorf Astoria Hotel could double his or her money every four years via dodgy land investments while not a blade of grass is cultivated or a room for living is built in the developing and Third World countries.

This policy will make a desert out of the world bar where the elite choose to take up residence, which for the moment is in the Western Hemisphere.
A former editor for the Jane’s Information Group in the UK, Nader (Kian) Mokhtari is a foreign policy specialist, columnist and political commentator with 15 years of experience in the field. He’s also worked as a lecturer at the Tehran School of Media Studies. Mokhtari is a frequent contributor to Press TV.