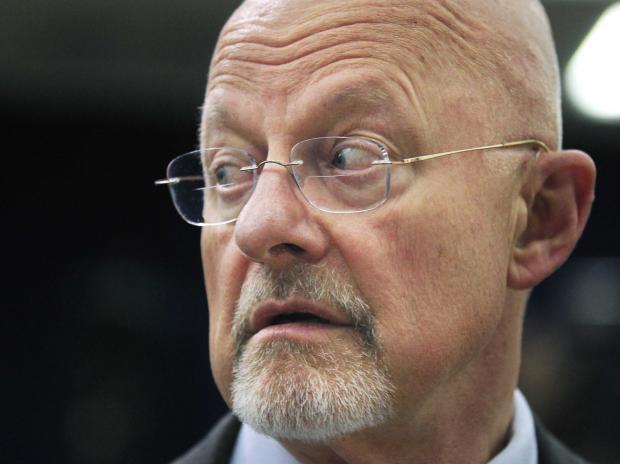 On January 29, he presented his annual worldwide threat assessment. He did so to Senate Select Committee on Intelligence members.

He lied calling terrorism “persistent threats to US interests overseas.” None exist except ones America invents.

They’re imported from dozens of countries. Funding, weapons, training and direction are provided.

They “increas(e) the likelihood of a protracted conflict.” Iran and Hezbollah “are committed to defending” Syria, he said.

They consider Assad a “key partner in the ‘axis of resistance’ against Israel.” They’re “prepared to take major risks to preserve the regime…”

Clapper wrongfully accused them of “threaten(ing) the interests of US allies.” They threaten no one.

His willingness to destroy his chemical weapons “adds legitimacy” to his government.

“Moscow has hailed (his decision) as a major foreign policy accomplishment. It positions Russia to play a major role in any future settlement of the Syrian conflict…”

“Previously, we had assessed that Syria had a highly active chemical warfare (CW) program and maintained a stockpile of sulfur mustard, sarin, VX, and a stockpile of munitions – including missiles, aerial bombs, and artillery rockets – that can be used to deliver CW agents,” said Clapper.

“Until the CW materials are completely destroyed or removed from country, groups or individuals in Syria might gain access to CW-related materials,” he added.

Despite no evidence suggesting it, he called Assad Syria’s main threat. He wants to produce biological weapons, he claimed. He cited no evidence proving it.

“We judge that some elements of Syria’s biological warfare program might have advanced beyond the research and development stage and might be capable of limited agent production, based on the duration of its longstanding program,” he claimed.

No evidence suggests it. Clapper wants attention focused on Assad. He manufactured a nonexistent threat. Perhaps it’s another pretext for direct US intervention.

Saudi Arabia supplies CWs. US special forces train jihadists in their use. They do so in Jordan.

Assad “remains unwilling to negotiate himself out of power,” said Clapper. He “almost certainly intends to remain the ruler of Syria and plans to win a new seven-year term…”

In mid-2014, presidential elections will be held. They’ll be independently monitored. A date remains to be set.

In May 2012, first time ever parliamentary elections were held. It was a milestone political event. It was open, free and fair. Independent candidates participated.

Voting went smoothly. Independent monitors supervised the process. They included intellectuals, legislators and judicial authorities. They came from other countries.

Ba’ath party members won a 60% majority. Previously they held just over 50% control. With support from independent MPs, they comprise 90% of Syria’s parliament.

Polls show overwhelming support for Assad. He’ll run if Syrians wish him to, he said. He’ll serve if elected.

“We continue to assess…Iran’s overarching strategic goals,” he said. It pursues “civilian goals.”

Clapper claims Tehran has “the ability to build missile-deliverable nuclear weapons, if it chooses to do so.”

Nothing suggests it. “We do not know if Iran will eventually decide to build nuclear weapons,” he stressed.

No programs exist to do so. Clapper claimed Tehran progressed technologically in “uranium enrichment, nuclear reactors, and ballistic missiles.”

Its “advancements strengthen our assessment that Iran has the scientific, technical, and industrial capacity to eventually produce nuclear weapons.”

US ones weren’t mentioned. Their long-range delivery systems weren’t addressed. They threaten humanity. Clapper was silent.

Despite Iran’s technological capabilities, he said, it won’t “be able to divert safeguarded material and produce enough weapons-grade uranium (WGU) before such activity would be discovered.”

If Iran “fully implements” the interim Joint Plan of Action, its transparency will “provide earlier warning of” any violations, he said.

Iran “will continue to act assertively abroad in ways that run counter to US interests and worsen regional conflicts.”

“Iran’s actions will likely do more to fuel rather than dampen increasing sectarianism.” Clapper presented no evidence proving it.

The Times of Israel took full advantage of his comments. On January 29, it headlined “Iran can now build and deliver nukes, US intel reports,” saying:

It has “break out” capability if it wishes. “This makes the central issue its political will to do so.” On January 28, Netanyahu repeated numerous previous lies.

The interim Joint Plan of Action only set Iran back six weeks, he said. There is “no dispute” about Iran wanting to “wip(e) Israel off the map.”

He referred to what former President Mahmoud Ahmadinejad never said. Nor Ayatollah Ali Khamenei. Nor other Iranian officials.

Claiming otherwise is one of many bald-faced lies. Netanyahu repeats them ad nauseam. He long ago lost credibility. Why Israelis put up with him they’ll have to explain.

Clapper addressed a nonexistent North Korean threat. Its “nuclear weapons and missile programs pose a serious (one) to the United States and to the security environment in East Asia,” he claimed.

Washington’s presence is the region’s only threat. Clapper didn’t explain.

He accused North Korea of “export(ing) ballistic missiles and associated materials to several countries, including Iran and Syria.”

He lied about North Korea helping Syria build a nuclear reactor. In 2007, Israel destroyed what didn’t exist he said.

In February 2008, Seymour Hersh headlined “A Strike in the Dark,” asking:

At the time, tensions were high. “(B)y almost any definition,” Israel committed “an act of war.” It said little. Syria denounced what happened.

He “was repeatedly told by current and former intelligence, diplomatic, and congressional officials that they were not aware of any solid evidence of ongoing nuclear weapons programs in Syria.”

Alleged evidence was suspect at best. No concrete proof existed then or now. “Much of what one would expect to see around a secret nuclear site was lacking at the target,” said Hersh.

“There (was) no security around the building. No barracks for the Army or the workers. No associated complex.”

Best evidence was a North Korean ship. Both countries had routine business dealings for years. North Korean laborers went back and forth routinely. They did nothing out of the ordinary.

They worked at the site. It was unrelated to nuclear or chemical weapons.

The facility struck “was to be one of a string of missile-manufacturing plants scattered throughout Syria, all low tech, not strategic,” said Hersh.

Whatever was attacked had nothing to do with nuclear reactor development. Clapper lied suggesting otherwise.

He lied about a nonexistent North Korean threat. Suggesting a possible future Iranian one doesn’t wash. No evidence whatever suggests it. Or that Syria threatens its neighbors. Or Iran.

It bears repeating. America and Israel are the region’s only existential threats. Clapper omitted explaining what’s most important.

It didn’t surprise. Hegemons blame victims for their crimes. They repeat with disturbing regularity.